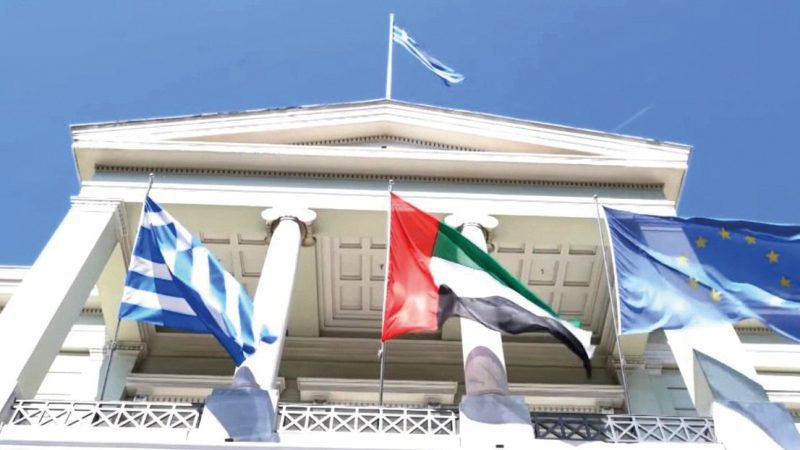 The strategic relationship with Greece is a top priority for the UAE, as too the desire to develop bilateral relations and seek new areas of cooperation.

In his statement at the opening of a business forum, the Emirati Minister, who headed a business delegation of the UAE’s largest investment funds and some of its most important companies, said that the strategic relationship with Greece is a top priority for the UAE and expressed the desire to develop bilateral relations, as well as the need to seek areas of cooperation. He said that there are many opportunities for cooperation between the UAE and Greece and stressed the need for tangible results as soon as possible.

Focusing on his visit to Athens, the Minister said that it marked an important milestone in the partnership “with this important country”, Greece, and noted that it came a few weeks after the significant Official Visit by Prime Minister Kyriakos Mitsotakis to Abu Dhabi.

Dr Sultan Al Jaber met with Prime Minister Kyriakos Mitsotakis during his visit to Athens. The Prime Minister affirmed the strategic importance that Greece places on its relations with the United Arab Emirates and noted the commitment of the Government to take full advantage of the mutually beneficial opportunities offered by closer cooperation with the UAE.

“We are very happy to have you in Athens again, after a very successful visit to Abu Dhabi. You know how much emphasis we place on this bilateral cooperation that has both a strategic and an economic character. I understand that you have already had and will have very interesting discussions to further enhance our economic cooperation,” the Premier underlined.

On his part, the UAE Minister said: “Our President always places emphasis on the special relationship he has with your great country and with you personally. He has a lot of admiration and respect for your leadership, for your Government and for your achievements in recent years.”

During the meeting, the multilevel strategic cooperation of the two countries was confirmed and they discussed the prospects for further enhancing bilateral economic-investment relations in various sectors, such as energy, with emphasis on renewables and hydrogen, industry and high technology, innovation, start-ups, infrastructure, aviation, shipping and tourism.

Dr Al Jaber said that the leadership of the United Arab Emirates’s were keen to build and strengthen ties in vital areas and promising sectors. “The UAE’s leadership is keen to build and strengthen cooperation with the international community. This reflects the great emphasis we place on enhancing bilateral relations with Greece, supporting the efforts of the strategic partnership between our two countries,” Dr Al Jaber added. He further said that since the launch of a partnership in November 2020, UAE-Greek ties have grown substantially despite the global impact of the Covid-19 pandemic.

The multilevel strategic cooperation of the two countries was confirmed and they discussed the prospects for further enhancing bilateral economic-investment relations in various sectors, such as energy, with emphasis on renewables and hydrogen, industry and high technology, innovation, start-ups, infrastructure, aviation, shipping and tourism.

Leaders from the UAE’s five largest investment funds in the country and 20 major UAE companies had contacts with Government officials and B2B meetings with Greek companies for two days. The Greek-Emirati forum was held at the Grande Bretagne hotel in Syntagma and was organised by Enterprise Greece, under the coordination of the General Secretariat for International Economic Relations and Openness. ADQ chaired the UAE-Greece Business Forum alongside chief executive officers of UAE companies in the energy, investment, health care, agriculture, defence, infrastructure, real estate development and financial sectors. The forum served as a platform to activate the $4.2bn joint investment fund, which was announced during the visit of Prime Minister Mitsotakis to Abu Dhabi in May.

Managing Director and Chief Executive Officer of ADQ Mohamed Hassan Alsuwaidi said: “As part of our long-term commitment to expand strategic cooperation with Greece, the UAE-Greece Business Forum supports the UAE’s vision and its ‘Principles of the 50’ to achieve economic development, diversify strategic investments and explore investment opportunities that would promote sustainable economic growth.” “Alongside our sovereign partners, we also aim to strengthen the partnership and investments between our two countries in many vital sectors such as industry, infrastructure development, food and agriculture, renewable energy, tourism, aviation and FinTech,” he added.

The ‘Principles of the 50’ are 10 principles that act as guidelines for all institutions in the UAE as the country approaches a new phase of development over the next 50 years. They are part of the ‘Projects of the 50’ campaign, to chart the strategic roadmap for the UAE’s new era of economic, political and social growth.

Trade relations between the UAE and Greece have recorded remarkable growth. The value of non-oil foreign trade between both countries reached more than $570mn. This is a 67% increase compared with 2020 and up 23% from 2019, which reflects a significant jump compared with before the Covid-19 pandemic.

The value of Greek investment activity in the UAE reached more than $92 million by the end of 2019, of which approximately 50% was in real estate activities; 23% in transportation and storage; 20% in construction; and 4% in information communication technology. The UAE’s investments in Greece increased to $258mn by the end of 2020.

Previous The 246th Anniversary of the Declaration of Independence of the United States of America
Next “Treat yourself with… Thessaloniki”: Whatever the problem, Thessaloniki is the solution