Foreign Minister Nikos Dendias, continuing Greek efforts to cultivate diplomatic relations with countries far from the Mediterranean, paid a visit to Japan on April 12th-13th. He held talks with his Japanese counterpart Yoshimasa Hayashi, Members of the Japan-Greece Parliamentary Friendship Group (of which former Foreign Minister Taro Kono is a Member) and also with the President and Members of the Board of Directors of the Greek Chamber of Commerce in Japan).

Bilateral and Euro-Japanese relations, cooperation in international organisations and developments in Ukraine after the Russian invasion, the Eastern Mediterranean, the Indo-Pacific and the Western Balkans dominated the meeting of Foreign Minister Dendias with his Japanese counterpart.

Minister Dendias described his visit as particularly successful in statements after the end of his meetings in Tokyo, adding that the common ground between the two countries is the focus on the International Law of the Sea (UNCLOS) and the tackling of revisionism.

“I had the opportunity to have an in-depth exchange of views with my Japanese counterpart, Yoshimasa Hayashi, following our contact in the Meeting of NATO Foreign Ministers in Brussels.

“First of all, we discussed Ukraine. My colleague demonstrated a particular interest for the Greek Diaspora in Mariupol and Odessa. We analysed the wider implications of the Russian invasion. But we also had the opportunity to talk about the International Law of the Sea and the cooperation we have established, the cooperation between the two Ministries of Foreign Affairs regarding the analysis of issues that fall within the International Law of the Sea, that is, UNCLOS. And beyond that, we discussed our bilateral relations and the possibility of their development in the near future,” the Greek Foreign Minister said. 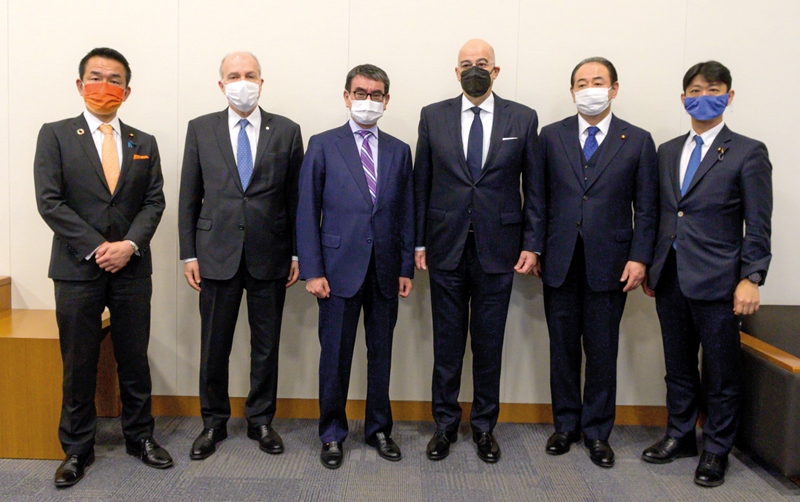 Japan is a particularly interesting case he added, “it is an island country, a country that has signed UNCLOS, a country that belongs to the Group of Friends on UNCLOS. And something else, which perhaps escapes the attention of Greek society: Japan is a country that also signed the Treaty of Lausanne in 1923. So, in this sense, it is a country which, considering its large size is an essential interlocutor on the issues of the Law of the Sea, on issues of stability and in the effort to address revisionism, meaning adherence to the Treaties and the borders defined by these Treaties. 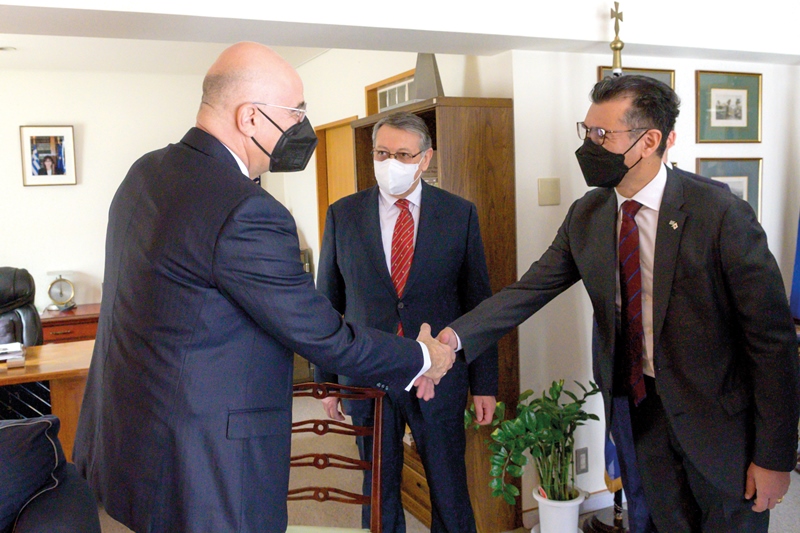 Above from left: Foreign Minister Nikos Dendias addresses members of the press with the Minister of Foreign Affairs of Japan, Yoshimasa Hayashi; the two delegations in conference. Minister Dendias meets with Members of the Japan-Greece Parliamentary Friendship Group; and with the President and Members of the Board of Directors of the Greek Chamber of Commerce in Japan.