State Visit of the President of Montenegro – enhancing bilateral cooperation

“Creating the foundations for a safer, better and more prosperous life for all our citizens.” 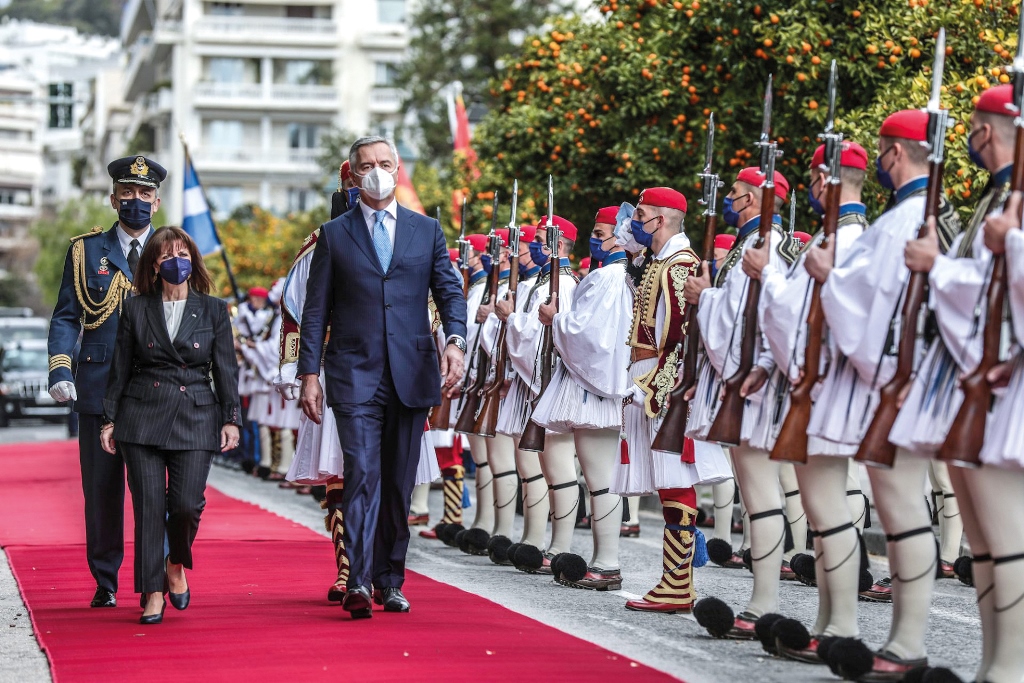 The first State Visit of the President of Montenegro to Athens, Milo Đukanović, took place on February 7th to February 9th, completing a series of top contacts and highly symbolic initiatives. This first State Visit of the Head of State of Montenegro to Greece since its independence in 2006 is a historically significant event for bilateral relations.

Upon arrival at the airport, the Montenegrin Head of State was received on behalf of the Greek State by the Deputy Prime Minister, Panagiotis Pikrammenos. The welcoming reception was attended, amongst others, by the Ambassador of Montenegro to Greece, Ana Vukadinović and the Honorary Consul of Montenegro in Thessaloniki, Dr. Vassilis Apostolopoulos.

On the following day the Montenegrin President began his programme by laying a wreath at the Monument to the Unknown Soldier in the presence of the Alternate Foreign Minister, Miltiadis Varvitsiotis. He then went to the Presidential Palace where he was granted an official arrival ceremony followed by a private meeting with the President of the Hellenic Republic, Katerina Sakellaropoulou. Extended talks then took place with the participation of delegations of the two countries.

A common component of the discussions, as reflected in the statements of the Presidents, was that the bilateral cooperation between Greece and Montenegro is very good in all sectors. However, significant margins for strengthening it were identified, as well as a strong will in this direction. Greece and Montenegro are allies within the context of their membership in NATO and the joint statements by the two Heads of State emphasised Montenegro’s European orientation and the effort to join the European Union, as well as Greece’s support in this direction.

Greece fully supports Montenegro’s European Union accession path and the expansion of bilateral relations between the two countries, leading to stability and progress in the greater region, Greek President Katerina Sakellaropoulou told her visiting Montenegrin President Milo Đukanović during their meeting at the Presidential Palace.

Relations between the two countries have much room for expansion, particularly in sectors of joint interest – economy, start-up entrepreneurship, tourism, energy and investments – while the development of interconnectivity, transportation and related infrastructure can bring both peoples closer, President Sakellaropoulou said.

This meeting was followed by President Đukanović’s visit to the Maximos Mansion where he had an official meeting with Prime Minister Kyriakos Mitsotakis, which was held in a very positive atmosphere, reaffirmed Greece’s steadfast support for the Western Balkans’ European perspective. The two top officials discussed the prospects and possibilities for further enhancing bilateral cooperation, with emphasis on the economy, commerce, energy and tourism. Furthermore, Premier Mitsotakis spoke of Greece’s active support for Montenegro through the provision of knowhow to assist its accession to the European Union. Both officials were also said to have exchanged views on issues of regional and international interest.

This meeting was followed by a visit to the Greek Parliament where the Montenegrin President met with the Speaker of the Hellenic Parliament, Konstantinos Tassoulas.

A major highlight of this State Visit was a state dinner held in honour of the visiting Montenegrin President and his wife held at the Presidential Palace. This formal event was attended by the two Presidents, the Speaker of Parliament, the Deputy Prime Minister, Panayiotis Pikrammenos, Alternate Foreign Minister Miltiades Varvitsiotis, Special Advisor to the President of Montenegro and former Minister of Foreign Affairs Milan Roćen, the Ambassador of Montenegro to Greece, Mrs. Vukadinović and the Honorary Consul of Montenegro, Dr. Vassilis Apostolopoulos.

As part of his State Visit, the Montenegrin President also laid a wreath at the tomb of General Vass (Brajović) Mavrovouniotis, a hero of the Greek Revolution, in the First Cemetery, to which the President of the Republic made a special reference the previous day, stating that “it symbolises our common path and the deep mutual respect that connects us.”

This was followed by a visit to the City Hall of Athens where the President met with the Mayor, Kostas Bakogiannis.

Afterwards, President Đukanović gave an interview to the press in which he stressed that there is great scope for deepening cooperation between Greece and Montenegro, especially in the fields of economy and culture. Crystallising the atmosphere of his talks in Athens, he underlined that the long-standing, very deep-rooted friendship between the two peoples was confirmed and expressed his confidence that his visit will give impetus to the further strengthening of bilateral relations. Relations that, as he explained, are already very strong in foreign policy and defence, with significant space and prospects for the further development of economic cooperation in the near future.

The Honorary Consul, who supported the Embassy of Montenegro in the preparation of the State Visit of President Đukanović and his entourage, spoke warmly about Montenegro, a country that he loves, honours and respects deeply, stressing that he will always be supportive, through all means at his disposal, strengthening Montenegro’s prospect of accession to the European Union. He further thanked the President for his respect and trust as they exchanged gifts of special symbolism.

At this private event present in addition to the delegation of President, were the Ambassador of Montenegro to Greece, Ana Vukadinović, the Secretary of the Embassy Katia Vukotić, the Vice President of the Consular Corps of Greece, Christos Vardikos, and the General Director of the Hellenic Entrepreneurs Association (EENE), Pavlos Efthimiou.

Dr. Apostolopoulos conveyed to President Đukanović the strong investment interest that exists in a number of sectors and industries, as well as the areas where significant synergies can be developed based on mutual benefit. Within this context, the possibility of organising a business mission to Montenegro in the near future was discussed, which was undertaken to be coordinated by the Honorary Consul himself in his capacity as President the ΕΕΝΕ.