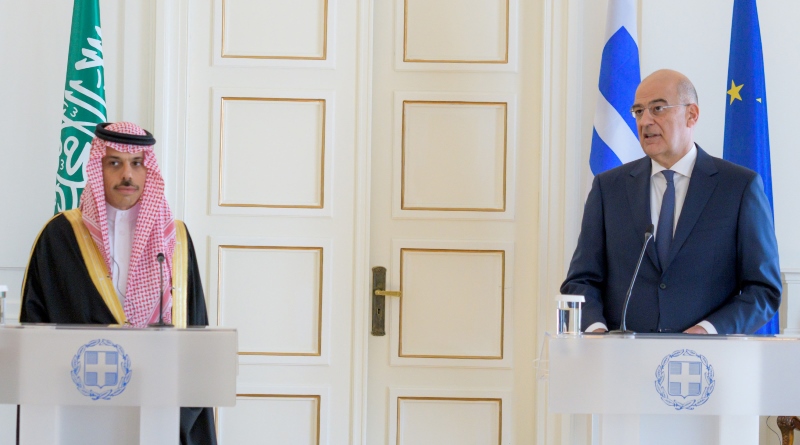 “The Arabian Peninsula comprises a bridge between the Mediterranean and the Indo-Pacific region.”

Greece and Saudi Arabia are committed to protecting and defending the International Law of the Sea and the freedom of navigation, Minister Dendias said after meeting with his visiting Saudi Arabian counterpart, Prince Faisal bin Farhan al Saud, who was in Athens on January 4th.

Both countries are committed to peace and stability in countries like Iraq, Libya and Syria, and in supporting the principle of non-intervention in domestic issues of third countries, he added.

Among other issues discussed at their meeting and subsequent joint statements to the press, the Greek Foreign Minister said that a Saudi Arabian delegation would visit the developing region of Thrace and the port city of Alexandroupoli, while he also expressed appreciation for the Arab country’s intention to establish an economic affairs office in Athens, an example of the closer relationship that the two countries are fostering and the intention to promote Saudi investments in Greece.

The strengthening of this relationship is also significant in the sense that “the Arabian Peninsula comprises a bridge between the Mediterranean and the Indo-Pacific region,” Minister Dendias pointed out.

On his part, Prince Faisal bin Farhan al Saud said, “I assured the Foreign Minister that we are interested in strengthening defence, cultural and trade relations with Greece,” and noted that they had discussed “how they can be developed and enforced in terms of investments, in order to be able to reach the point we want and reflect our very good relations.” Greece and Saudi Arabia must take advantage of every opportunity to boost their relationships, he stressed.

Both countries underlined their interest in fighting terrorism in the region and in supporting security and peace. They also discussed the attacks Saudi Arabia is facing and the attempts by others to destabilise the region, alongside recent developments in Afghanistan, on which the Saudi official said the Foreign Ministers of the Organisation of Islamic Cooperation were holding an emergency meeting on how to respond to the situation and help the Afghan people both in humanitarian terms and in terms of the region’s stability.

With regard to Greece’s neighbour, Turkey, Minister Dendias said this country’s stance on Greece “is the epitome of irrationality.” Its rhetoric against Greece “has reached a level we have not seen for years,” Minister Dendias noted, while the neighbouring country is intent on misrepresenting the truth and any sense of International Law, including the Law of the Sea. “It threatens Greece with war if we apply the inalienable right of expanding our territorial waters, as is explicitly foreseen by the International Law of the Sea,” the Minister said.

“Turkey has lined up across our islands the largest landing force and largest landing fleet in the Mediterranean while demanding that we demilitarise our islands – in other words, that we relinquish our recognised right to self-defence, as foreseen in the UN Charter,” he added.

Instead, Turkey should prove its faith in International Law practically, by starting to implement it. “One of the simplest and fastest implementations would be the immediate retraction of the casus belli and the immediate recognition of the nullity of the so-called Turkish-Libyan memorandum,” he stressed.

Prince Faisal’s visit was the first visit to Greece by a foreign official after the New Year and “a visit by a friend is a mark of a good year,” Minister Dendias said. 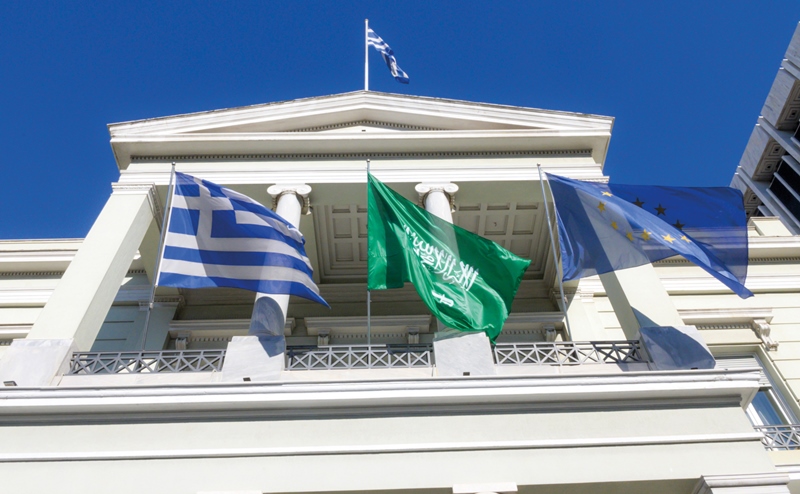