Foreign Minister meets with his counterpart in Vilnius

The migration crisis is “a European challenge” 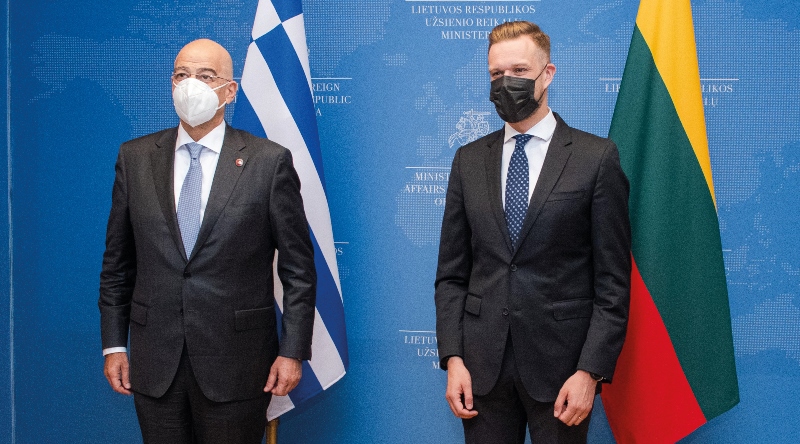 Minister of Foreign Affairs, Nikos Dendias, recently travelled to Vilnius where he met with his Lithuanian counterpart, Gabrielius Landsbergis. The reception for Minister Dendias, on his first visit to the Lithuanian capital, was made in a cordial atmosphere by the Lithuanian Foreign Minister and marks the excellent level of Greek-Lithuanian relations and the common will to promote cooperation bilaterally and at European level.

In the broader talks of the delegations that followed the bilateral meeting of the two Ministers, the strengthening of the cooperation and the developments in the Eastern Mediterranean, Western Balkans and Eastern Neighborhood were discussed.

Minister Dendias was also received by the Speaker of the Lithuanian Parliament Victoria Smilite-Nielsen, with whom he discussed bilateral relations and cooperation, with an emphasis on Parliamentary Diplomacy, while he had been invited to address the Parliament Committee on Foreign Affairs.

Greece and Lithuania may be geographically far apart, but “we share a common fate as we are both in the boundaries of the EU,” Minister Nikos Dendias said at his meeting with his Lithuanian counterpart. He added that the migration crisis is an issue which both countries can raise in the EU Council of Ministers as “a European challenge,” and said that Greece could provide Lithuania with technical expertise, know-how and human resources to help with migration influxes.

Greece faced a migration crisis in the mid 2010s when asylum seekers from the Middle East started coming to the country via the Mediterranean Sea en masse.

“We can help in any way Lithuania sees fit,” the Greek Minister said during a joint press conference with Lithuanian Foreign Minister. “We have the experience of the bigger neighbour pushing, instrumentalising the migration phenomenon.”

Minister Landsbergis said he asked his Greek counterpart “for advice and technical assistance” since his country “has been dealing with the refugee problem much longer”.

Greek officers could come to Lithuania to consult border guards and officers from the Interior Ministry, Minister Landsbergis said, adding that Greece had a lot of experience in applying EU law when processing asylum applications.

Lithuania has never been the first country of entry to the EU for migrants, He said, “and Greece has”.

Lithuania has recently seen a dramatic increase in irregular migration from Belarus, with Lithuanian officials saying that Belarusian authorities are helping migrants cross the Lithuanian border.

Minister Landsbergis claims that the Belarusian Government “is actively organising the refugee programme and is using it against Lithuania as one of the hybrid instruments”.

Speaking ahead of a working lunch, Minister Dendias underlined that “we are not happy with the level of our economic cooperation,” and added that “we can do a lot more, as there are many initiatives, like the Three Seas Initiative or connecting our railways, that could help us enhance our economic relations. This will also help us address energy issues.”

Referring to the nuclear power plants of Astravets in Belarus and the Akkuyu project in Turkey, both built with Russian technology, Minister Dendias said Greece is “very sensitive with nuclear energy,” adding that he is “old enough to remember what it means to have a nuclear accident in your neighbourhood.” Nuclear energy should be discussed within the context of EU neighbours, he stressed.

The Greek Minister also condemned anew the recent forced landing of a civilian flight by Belarusian authorities at Minsk airport as “a piracy,” and commented on the recently meeting of the Greek and Turkish leaders on the sidelines of the NATO Leaders Summit in Brussels.

Pictured above: Minister of Foreign Affairs, Nikos Dendias, with his Lithuanian counterpart, Gabrielius Landsbergis; with Speaker of the Lithuanian Parliament, Victoria Smilite-Nielsen, and other officials.

Previous The new General Secretariat for Greeks Abroad and Public Diplomacy: An important soft power mechanism
Next Official Visit of the External Affairs Minister of India to Greece