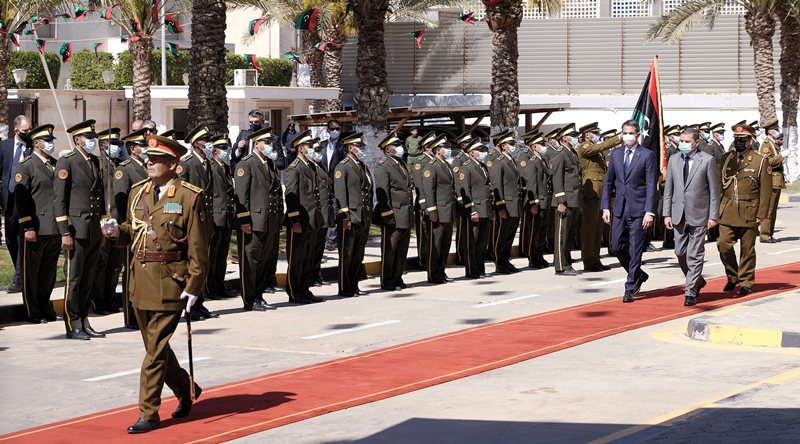 A series of Official Visits have recently taken place between Greece and Libya focused on bilateral relations, the promotion of cooperation and regional developments, as well as Libya’s stabilisation and reconstruction. A major highlight was the announcement by the Greek Foreign Minister of the resuming of operation of the Greek Embassy in Tripoli and the General Consulate in Benghazi, a move which will further consolidate bilateral cooperation and strengthen relations between the neighbouring countries. 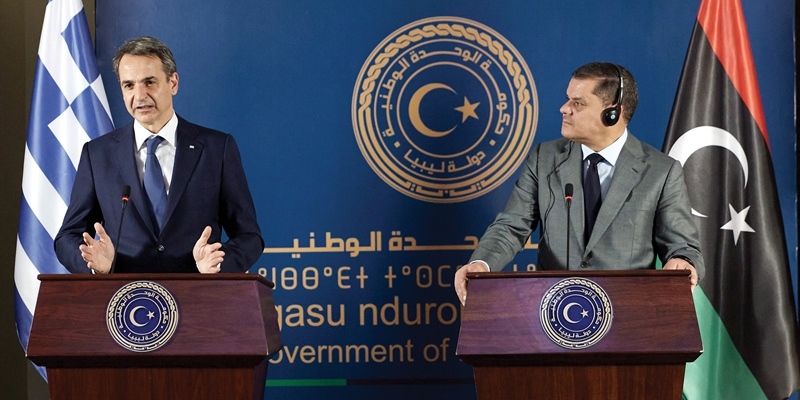 Prime Minister Kyriakos Mitsotakis recently paid an Official Visit to Libya which marked the relaunching of Greek-Libyan relations. He was accompanied by Foreign Minister Nikos Dendias, who underlined that “Libya is making the first steps in its return to normality and Greece will do whatever possible to support it. A necessary prerequisite for the return to normality is the withdrawal of all foreign troops and mercenaries.”  The Greek delegation also included Government Spokesman Aristotelia Peloni and top departmental Foreign Ministry officials – making this a most productive trip to the North African country. Athens believes that the resumed operation of the Greek Embassy in Tripoli and the General Consulate in Benghazi will significantly contribute to strengthening the two countries’ relations in all sectors.

As part of his itinerary, Premier Mitsotakis met with the Prime Minister of the provisional Government of National Unity (GNU), Abdul Hamid Dbeibeh and also had a meeting with the President of the Presidential Council of Libya, Mohamed al-Menfi, which was followed by broad deliberations between the two delegations. He visited the Greek Embassy in Tripoli which reopened after seven years of closure. At the same time, Foreign Minister Dendias met with his counterpart Najla al-Mangoush.

In his talks with the caretaker Prime Minister of Libya, Premier Mitsotakis called for the “cancellation of illegal documents that were presented as alleged transnational agreements but have no legal force, as explicitly ruled by the European Council”. “The European Union and its Members are here, and are determined to support the Libyan people, who have suffered so much in the last decade,” the Greek Prime Minister said. He also called for the immediate and complete withdrawal of foreign troops and mercenaries from Libyan territory.

The caretaker Premier of Libya (elections are scheduled for December 2021) said to Premier Mitsotakis that he is willing to form a committee to discuss the delimitation of the maritime zones starting from the point where the talks stopped in 2010. Libya’s caretaker Premier Dbeibeh has sent messages that he wants cooperation and the restoration of relations with Greece.

It is obvious that the transitional institutions are almost impossible to make big decisions and Athens knows that at this stage the demand for the cancellation of the illegal agreement will not succeed soon.

The effort made by Premier Mitsotakis and Minister Dendias was to persuade their Libyan partners to not make moves to activate the illegal Turkish-Libyan memorandum and at the same time to create the conditions for the resumption of the Greek-Libyan dialogue for the delimitation of the maritime zones from the point that was stopped in 2010.

Premier Mitsotakis also noted that the issue of maritime zones will affect not only Greek-Libyan relations, but also the North African country’s relations with the EU. He further referred to the multiple opportunities for economic cooperation between Greece and Libya and highlighted the importance of the defence bond between the two countries, recalling that “more than 280 Libyan officers have graduated in recent decades from the schools of the Hellenic Armed Forces.” He also noted that Libyan Coast Guard officials have also been trained in Greece. 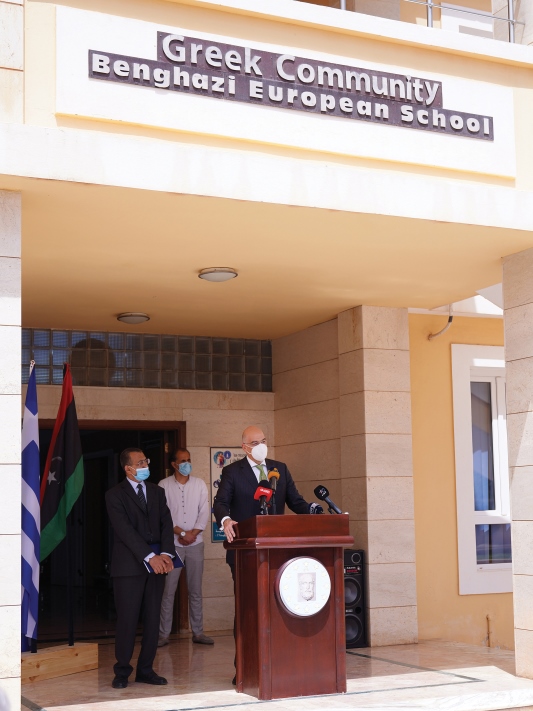 The Greek head of diplomacy held talks with the Libyan officials focusing on bilateral relations and regional developments, as well as on matters relating to the imminent start of operations by the Greek Consulate General in the city.

Commenting on Foreign Minister Nikos Dendias’ visit to Libya, diplomatic sources said its aim was to drive home three key messages: the need to initially avoid any initiatives with respect to the illegal and void ‘Turkish-Libyan memorandum’ that could make Libya’s relations with Greece and the EU more difficult, that the Greek presence is more firmly established via the opening of a Greek Consulate General in Benghazi and Greece’s readiness to contribute to Libya’s restructuring. The response of Libyan authorities was positive to the three messages, the same sources said. Greece is one of the first countries that will reopen a consulate in Benghazi and the response of the Libyan officials was warm.

In all his meetings there, Minister Dendias referred to Greece’s readiness to assist in the holding and organisation of smooth elections and to the country’s restructuring, underlining the long presence and experience of Greek companies in Libya. Within this context he announced that Deputy Foreign Minister responsible for Economic Diplomacy Kostas Fragogiannis will visit Libya in the near future.

Minister Dendias’ visit to Libya one week after Greek Prime Minister Kyriakos Mitsotakis’ visit was another opportunity to strengthen relations between the neighbouring countries, with the consolidation of bilateral cooperation and promotion of Greece’s fair and just positions as a guideline, the same sources added.

President of the Presidential Council of Libya in Athens 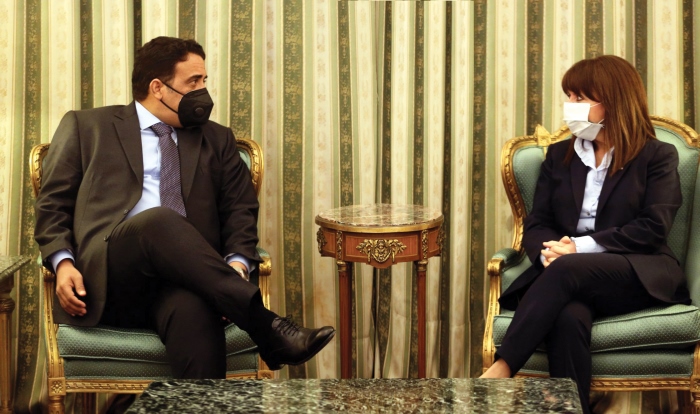 After the above visits, President of the Presidential Council of Libya, Mohamed al-Menfi paid a visit to Athens where he held a series of meetings with President of the Hellenic Republic Katerina Sakellaropoulou, Prime Minister Kyriakos Mitsotakis and Foreign Minister Nikos Dendias.

Prime Minister Mitsotakis agreed with Presidential Council President al-Menfi on the immediate resumption of the Greek-Libyan talks on the delimitation of maritime zones, under the responsibility of the Foreign Ministers of both countries. The Prime Minister also stressed that a prerequisite for holding elections so that “the Libyan people themselves can take the country’s fate into their own hands” is the withdrawal of all troops from Libya.

He further welcomed the intentions of Libya’s President and Prime Minister “for Libya to discuss with Greece critical issues such as the delimitation of maritime zones”. He offered assurances that Greece is a nation that is friendly toward Libya, that the Greek people are friendly toward those of Libya and noted that relations between the two countries go back many centuries. 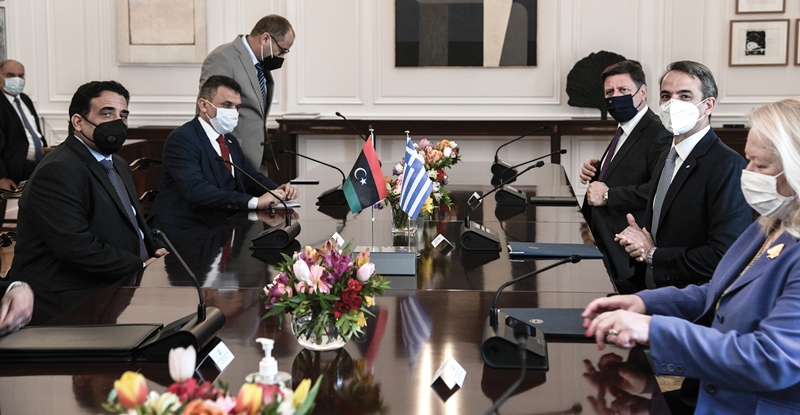 On his part, al-Menfi said that “our main concern has always been for Greece to become a gateway to the European Union”, while noting that Libya has so far “seen only good behaviour” on the part of Greece and the Greeks. Referring to historical relations between the two countries, he spoke of “a common history, between my country, Libya and Greece” and emphasised the development of relations with the European Union. “Even if, at some point, these relations went through some difficult times, this can be resolved through dialogue and I personally believe that the commonalities that unite us will help us to cope with any difficulties,” he said.

The Libyan President also referred to economic cooperation between the two countries and his term as Ambassador in Athens, during which, as he said, he sought to increase the presence of Greek companies in his country. At the same time, he thanked the Greek Government for the reopening of the Embassy in Tripoli and the reopening of the Consulate General in Benghazi, which, as he said, “actually reflects Greece’s desire to support Libya, to support the new Libyan Government.”

The Libyan President stressed that his visit is also an invitation to Greek companies to operate in Libya, given the stability that his country is currently experiencing. Concluding, he emphasised the importance of international support from the United Nations, from the EU, and expressed hope that Greece would continue its support in all international fora, so that Libya can hold elections at the end of the year; “for the departure and removal of all mercenaries currently in my country.”

During his audience with President Sakellaropoulou, she expressed Greece’s support for the leadership of Libya’s new Government, noting that with the election of the interim Government and the vote of confidence it received from the Libyan Parliament, Libya is entering a new era. “Relations between the countries on the shores of the Mediterranean, as well as of all neighbouring countries between them, should be governed by respect for International Law and especially the Law of the Sea and the principle of good neighbourliness,” she added.

The talks between Foreign Minister Dendias and President al-Menfi focused on bilateral relations, the promotion of cooperation and regional developments, as well as Libya’s stabilisation and reconstruction.