Foreign Minister of Croatia in Athens for talks

Ministers underscored that Greece and Croatia have excellent relations, with great potential in numerous areas

Croatian Foreign Minister Gordan Grlić Radman visited Athens and met with Minister of Foreign Affairs Nikos Dendias on March 12th. The two Ministers underscored that Greece and Croatia had excellent relations, with great potential in numerous areas, and that their meeting in Athens indicated additional strengthening of dialogue and cooperation. 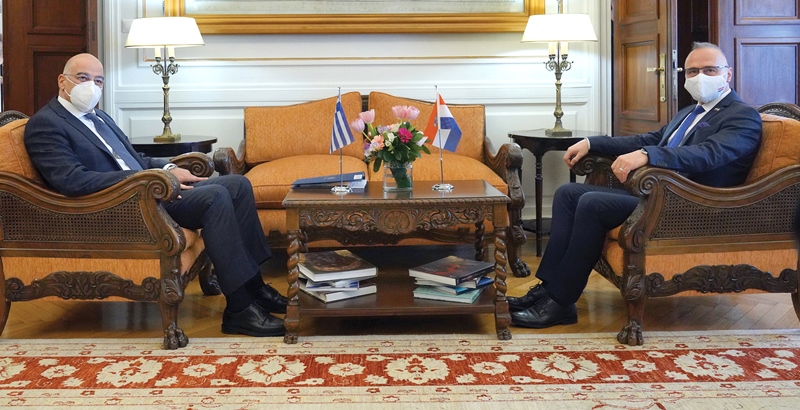 In their joint statements to the press, Minister Radman thanked Minister Dendias for the Greek support of Croatia’s accession to MED7, OECD, Eurozone and the Schengen Area.

The two heads of diplomacy underlined the importance of continuing EU enlargement to Southeast Europe and of Brussels having a consistent policy so that candidates do not lose the European perspective. Minister Dendias also reiterated their will for an intergovernmental conference with North Macedonia, as well as with Albania, as soon as they meet the criteria set by the European Council.

Ahead of the upcoming meeting of the European Council, Minister Dendias said that they also discussed EU-Turkey relations and that he had the opportunity to underscore that the report to be submitted by the institutions should be balanced. “It should have proposals for both a positive agenda and the prospect of taking restrictive measures if our neighbour Turkey again gives in to the temptation to return to unlawful conduct,” he stressed.

Minister Dendias also congratulated Croatia on chairing the Council of the EU the previous year, stressing that Greece and Croatia had excellent cooperation within the EU. He recalled Croatian Prime Minister Andrej Plenković’s visit to the Greek-Turkish border in Evros in March 2020 together with Greek Prime Minister Kyriakos Mitsotakis and heads of EU institutions, when an attempt was made to provoke a mass influx of migrants into European territory. 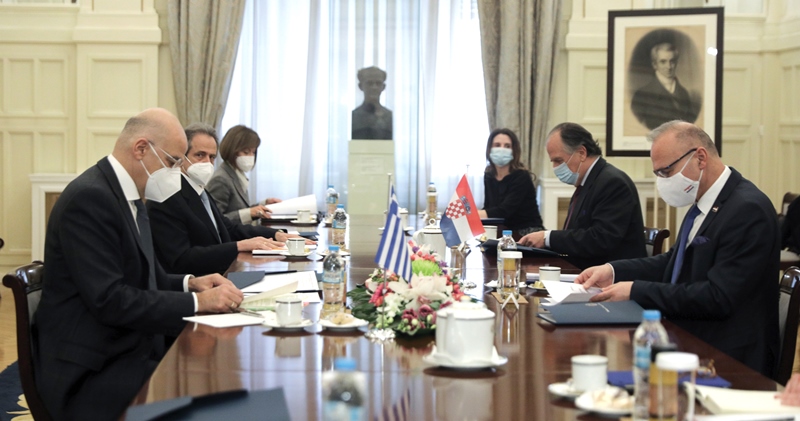 The two delegations in conference, including Croatian Ambassador Aleksandar Sunko.Both sides mentioned the need to create a framework of close cooperation and dialogue between their two Ministries of Foreign Affairs.

Minister Dendias said that it is very important to Greece to create closer cooperation with Croatia.  “Because we do not have any bilateral disputes, we must work even more on a positive agenda, promoting our economic relations, promoting our efforts towards a common understanding of problems, joint responses to problems and a shared outlook on our future on the Mediterranean. A common outlook on how to manage the maritime-zone issues created by the Mediterranean that can and must be dealt within the framework of the International Law of the Sea – which is International Law – to which Croatia is a party, both individually and as a Member of the EU,” he pointed out.