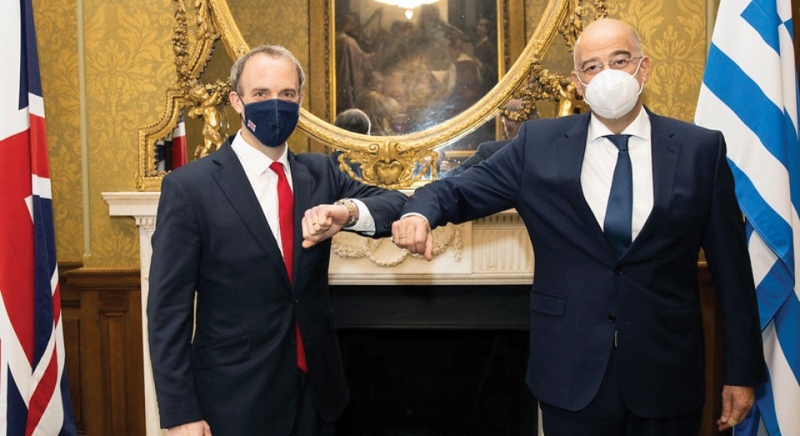 Foreign Minister Nikos Dendias had an extensive conversation with the British Foreign Secretary Dominic Raab in London on February 2nd, where there was a coincidence of views on the Cyprus issue, but they also stressed the need to apply International Law when resolving disputes.

Greece and the United Kingdom both exercise their foreign policy based on International Law, stated Foreign Affairs Minister Dendias. “Both countries comply with our contractual obligations arising from International Law…, therefore we expect our neighbours to do the same,” he noted.

Minister Dendias briefed Secretary Raab and Deputy Minister Morton on the latest developments in the Eastern Mediterranean, before noting that Greece expects the United Kingdom “as a permanent Member of the United Nations Security Council, and given its significant abilities, to contribute in creating in the Eastern Mediterranean a framework of implementation for the rules of International Law and of the United Nations Convention on the Law of the Sea (UNCLOS),” which the UK has signed.

The British side showed great interest in the Greek positions regarding both relations with Turkey and the Cyprus issue. The British Foreign Secretary acknowledged that the UK’s relations with Turkey are close, but noted that they are not competitive with its relations with Greece. On the contrary, he repeatedly stressed his readiness to convey messages to Ankara, when and if the need arises. He fully agreed with his Greek counterpart regarding the universal application of the International Law of the Sea “in the Eastern Mediterranean, in the China Sea and in the Straits of Hormuz,” as he pointed out.

Regarding the Cyprus issue, the British Foreign Secretary repeated without hesitation that the only framework for resolving the issue is a bizonal, bicommunal federation, based on the UN Security Council Resolutions. Within this context, the prospects of the next informal five-party meeting were examined. On his part, the Greek Foreign Minister reiterated Greece’s positions on the matter, which calls for a “bizonal, bicommunal federation based on the conclusions of the UN Security Council and which must also be compatible with European Law.” He also pointed out that this meeting should not give the impression that this is the last chance for the resolution of the Cyprus issue.

Minister Dendias mentioned that discussions also focused on bilateral cooperation of the two countries in the post-Brexit era, “to establish a strategic partnership” between Greece and the United Kingdom, which have traditionally been allies in all conflicts over the last 200 years.

Regarding the bilateral strategic relationship, Minister Dendias referred to specific areas that could be included in a new agreement, such as education, culture, trade relations, the fight against terrorism, as well as migration and refugees. These areas could be developed within a framework agreement, under the coordinating role of the two Foreign Ministries.

“We are linked to Great Britain by many things; first of all, common values. Greece is the birthplace of Democracy. The United Kingdom is the birthplace of Parliamentary Democracy.” “And, as we are celebrating the bicentennial of the Modern Greek State, I reminded my interlocutors of some British figures who championed Greek independence and prosperity – George Canning, William Gladstone, David Lloyd George, Winston Churchill. I told them that no Greek can forget Lord Byron; there is no Greek who does not know Admiral Codrington’s contribution to Greek independence,” he highlighted.

“At the same time, Greece and Great Britain are linked by the Greek community in Britain, the British community in Greece and the millions of British visitors Greece welcomes every year. There are also the priceless monuments of our cultural heritage, which are housed in the British Museum, and a framework obviously has to be formulated for their return to Greece,” the Greek Foreign Minister said.