Foreign Minister of North Macedonia in Athens for talks

Following their talks, the two Ministers of Foreign Affairs signed three Memoranda of Cooperation; more specifically, in the field of Diplomatic Training, in the field of Civil Protection, as well as between Enterprise Greece and Invest North Macedonia.

The Minister of Foreign Affairs of Northern Macedonia concluded his visit to Athens by meeting with the State and political leadership of Greece. He was first received by the President of the Republic, Ekaterini Sakellaropoulou, discussing the progress of bilateral relations in the era of the Prespes Agreement, the situation in the region and the European perspective of North Macedonia.

Minister Osmani was then received by his Greek counterpart. In joint statements following the signing of the three agreements, Minister Dendias noted that “we cannot allow the creation of a stability gap in the Western Balkans,” while warning that the gap could be easily filled by other non-European forces that pursue revisionism.

Greece has historically and actively supported the Western Balkan countries and their accession prospects, he noted, “though always on the basis of the conditionalities, meritocracy and methodology of the EU.” “We firmly believe that this is the only path for peace and stability in the region. Europe has an obligation to keep European enlargement on the table,” Minister Dendias added.

The Foreign Minister also said that Greece is ready to provide technical assistance and to support the efforts of the Western Balkans for EU accession but noted that “we must have a fully consistent and good faith implementation of the Prespes Agreement in order to have progress.” “Two years after the Prespes Agreement came into force, we acknowledge that there has been a very great effort for its implementation. But, of course, greater progress is required,” he said.

This included efforts to consistently implement the use of the agreed name and terms by all public and private entities, including websites, and eradicate the problems of ancient symbols and the Vergina Sun from public spaces and for public uses, he noted. ”What is absolutely clear in the Prespes Agreement is clarity on what happened in antiquity,” Minister Dendias said, pointing out that it was clear and has been accepted by North Macedonia that it was not part of the military campaign of Alexander the Great, nor took part in its major battles and other historic moments.

Minister Dendias also highlighted the fact that Greece can be North Macedonia’s greatest ally and friend, as the country’s stability and prosperity was also in its own interests, while Greece has welcomed North Macedonia as an ally in NATO and patrols its skies. He also thanked the neighbouring country for aligning itself with the common EU position on Turkey, saying that this was noted and appreciated by Greece. 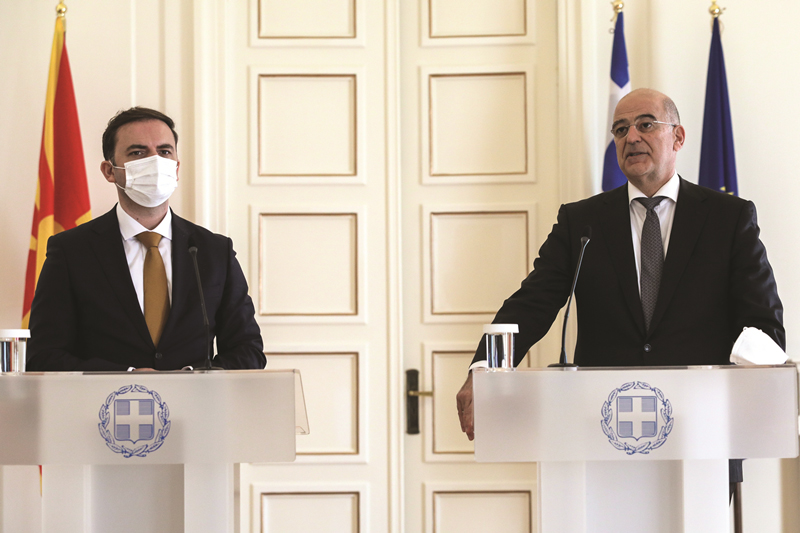 Referring to the three memoranda of understanding signed, he said these have taken bilateral relations one step further. “We must further encourage trade and investments… as these can create new jobs and prosperity in both countries, but also the surrounding region,” he said.

He noted that Greece has made a great effort to provide support in terms of supplying North Macedonia with vaccines against Covid within an EU framework, pledging to continue this effort.

North Macedonia’s Foreign Minister thanked Greece for its support of his country’s EU accession prospects and the start of accession negotiations, saying it was the basis of a long friendship between the two countries and that Greece and North Macedonia are “strategic partners and with the commitment to implement the Prespes Agreement, we will continue to develop and strengthen this strategic partnership relationship.” He said the intention of the two countries was to progress further than good neighbourly relations in order to build a “sincere and strategic partnership relationship based on mutual trust and support.”

Minister Osmani said that the pandemic had shown the importance of cooperation between countries in civil protection, especially when these countries had shared borders, while he also highlighted the various infrastructure projects that spanned the borders of the two countries, such as the interconnector pipeline for natural gas, improvements to road and rail networks and North Macedonia’s aim to participate in the FSRU in Alexandroupolis and open up a new border crossing.

“I expect that in the coming months, as the restrictive measures for the pandemic are eased, we will have an increase in cooperation between us and also the implementation of the activities outlined in the action plan of the Prespes Agreement,” he added. He called for more bilateral meetings and agreements on all levels, as well as more activities outlined in the action plan that will create greater trust between the two countries, emphasising the importance of a “lasting friendship” between them.

During the meeting in the Maximos Mansion, they also discussed North Macedonia’s prospects for EU accession, Government sources said. Premier Mitsotakis reiterated that the provisions of the Prespes Agreement must be implemented fully, consistently and in good faith.