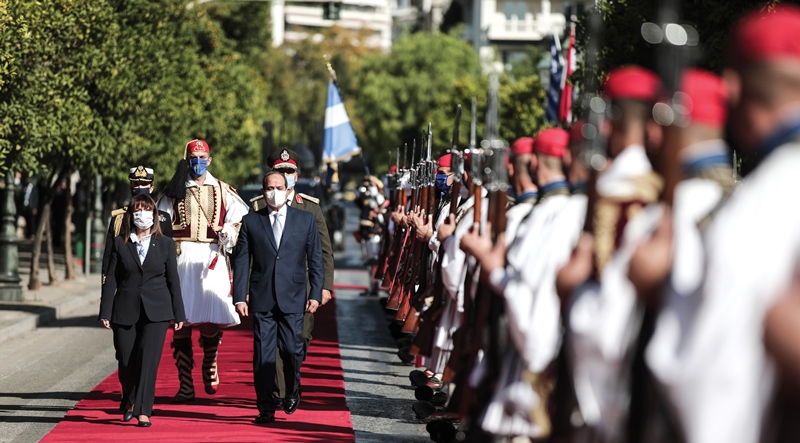 Egypt and Greece an important bridge of Meeting, Dialogue and Cooperation

Egyptian President Abdel Fattah Al-Sisi paid a State Visit to Greece at the invitation of President of the Hellenic Republic Katerina Sakellaropoulou on November 11th-12th. Foreign Minister Nikos Dendias received the Egyptian Head of State at the airport on behalf of the Greek Government before he met individually with his Greek counterpart and Prime Minister Kyriakos Mitsotakis.

“The signing of the EEZ partial delimitation agreement on August 6th and its entry into force is a milestone for relations between our countries, as well as for the wider region,” President Sakellaropoulou said during her meeting with the visiting Egyptian President. She pointed out that it is very important for Greece and herself, personally, that the country is today welcoming the leader of a great, friendly nation, which is also a pillar of stability in the region and a real leader of power in the Muslim and Arab world. “A country associated with Greece, with long-standing relations of friendship, respect and culture,” she added.

The Greek Head of State also referred to the escalation of Turkish aggression and delinquency and condemned the recent resurgence of terrorism with religion as a pretext, emphasising that it is indisputable that religious values have nothing to do with acts of extremism.

On his part, the Egyptian President thanked President Sakellaropoulou for the warm welcome and referred to the long-term relationship between the two countries expressing his confidence that their discussions will be constructive. He agreed with his Greek counterpart regarding the agreement of August 6th, noting that it will contribute to the strengthening of bilateral relations and added that other agreements will follow. He also stressed that Egypt will stand by Greece and in support of its rights, on any issue related to the country’s security and maritime borders. Finally, the Egyptian President agreed that recent terrorist acts have nothing to do with religion or with what some believe, but are the acts of extremists, which must not lead to religious conflicts.

The Greek President addressing her distinguished guests in a State Dinner in honour of her counterpart she stressed that the Greek-Egyptian relationship is characterised by “cooperation, mutual respect, trust and appreciation and on the other hand, is an indisputable witness of the mutual will to further develop our cooperation in a number of areas, political, defence, economic, energy,” she said.

In response, President Al-Sisi noted that the common values, mutual interests and close cultural ties between Egypt and Greece make the two friendly countries an important bridge of meeting, dialogue and cooperation between the Arab and Islamic worlds on the one hand, and the European continent on the other. “It places on our shoulders the common responsibility to spread the values of peace, tolerance, rejection of violence and mutual respect between the peoples and cultures of the southern and northern Mediterranean,” he continued.

After a meeting with the President of Egypt, Prime Minister Kyriakos Mitsotakis said that “trilateral cooperation is a foundation of peace, stability and prosperity; a foundation that Greece, Egypt and Cyprus are steadily serving.”

During their joint news conference, Premier Mitsotakis stated that Greece and Egypt will welcome “a more decisive role of the United States in the Middle East and the Eastern Mediterranean” .

“In our troubled region, our two countries have already set an example of peace and cooperation with an emblematic moment on August 6th, when they signed an agreement on the partial delimitation of maritime zones and our common intention to continue consultations so that this agreement can be extended,” Premier Mitsotakis said.

“It is a very important development. This agreement is the best example of how, when we are guided by International Law, the rules of good neighbourly relations and respect, we reach agreements that benefit our peoples,” he added. These are “emblematic actions that generate conquests of peace and cooperation,” the Premier stressed, adding that “contrary to the stance of neighbouring Turkey, the Mediterranean can become a sea that unites instead of dividing peoples.”

Premier Mitsotakis said his talks with Egypt’s President had focused on the EastMed pipeline, while adding that “every country can participate, provided it abstains from provocations and respects International Law.” “Greece and Egypt are partners with mutual export relations and common strategic goals,” he said, stressing that “soon both countries will be even more attractive investment destinations.”

The Prime Minister also spoke about migration, highlighting Egypt’s important role “in stopping migration flows”, but also its participation in the ceasefire agreement in Libya, which he said was “due to Egypt”. “We all feel Egypt’s important role as a beacon of moderate, of true Islam. Especially in times, like the present, when certain forces are attempting to don a religious mantle,” he added.

Closing his statements, Premier Mitsotakis referred to a historical event: “As of today, 78 years ago the historic battle of El Alamein was concluding with the famous victory of the allies; A starting point for the liberation of Europe. Among those fighters were thousands of Greeks who made Egypt the base of their struggle. Our countries have always been together. Then in war, today in peace and tomorrow in growth and prosperity.”

On his part, President Al-Sisi said: “We discussed the events in our region and the adoption of policies by some that are at odds with the international community and we agreed to jointly address all those who want to threaten peace.” “We also agreed to strengthen each other in terms of defence relations,” he added.

“We agreed on a just solution to the Cyprus problem based on International Law and referred to the situation in Libya, where we agreed that there should be a political solution that will bring peace and stability to the region,” the Egyptian President said, adding that they also agreed on the immediate need to tackle international terrorism and stop the countries that support it. “We have also agreed that global terrorism has nothing to do with religion and we reject any insult to any religion,” the Egyptian Head of State added. 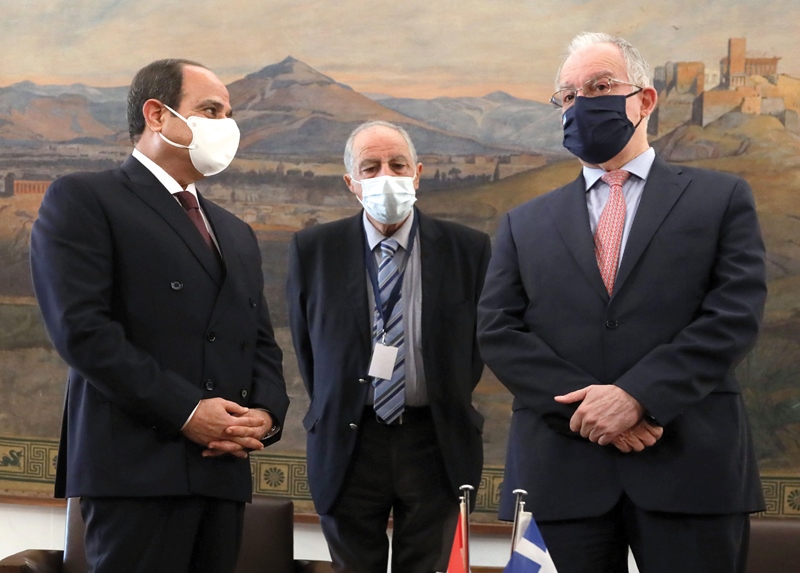 “Greece and Egypt recollect the UN Charter, respect the principles of good faith and good neighbour relations and seek stability in the wider region,” stated Parliament President Constantinos Tasoulas, welcoming visiting Egyptian President Abdel Fattah Al-Sisi to the Greek Parliament. “International Law, peace and growth are in the interests of the peoples,” he added, referring to the exemplary cooperation between Greece and Egypt.

“I welcome you to my country, to the Greek Parliament, which later today will sign an agreement on cooperation in the tourism sector between Greece, Cyprus and Egypt,” he added.

On his part, the Egyptian President conveyed the Egyptian people’s respect for the Greek people: “The message is the long and constant relationship between the two countries throughout history,” he said, and thanked Greece for “conveying the voice of Egypt to the European Parliaments,” adding that the relations of the two countries will continue with a series of visits and contacts between representatives of the two Parliaments.

“Egypt is an eternal friend which will stand by your side,” the Egyptian Head of State concluded. 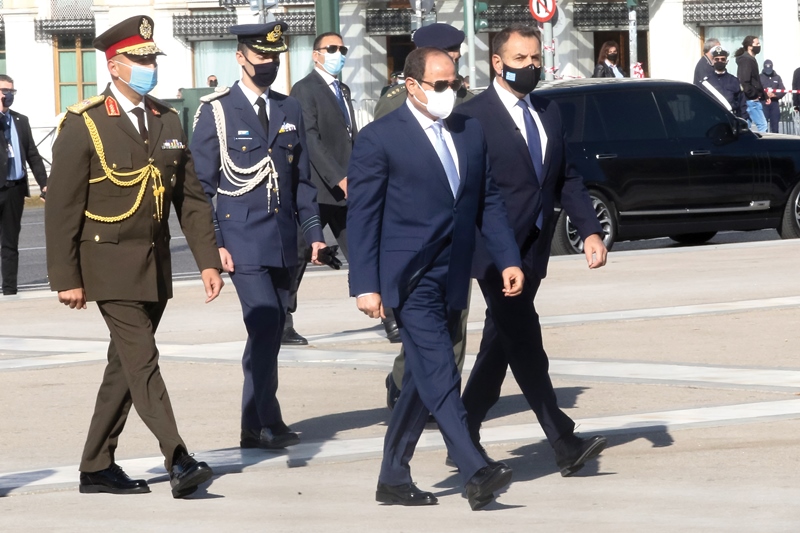 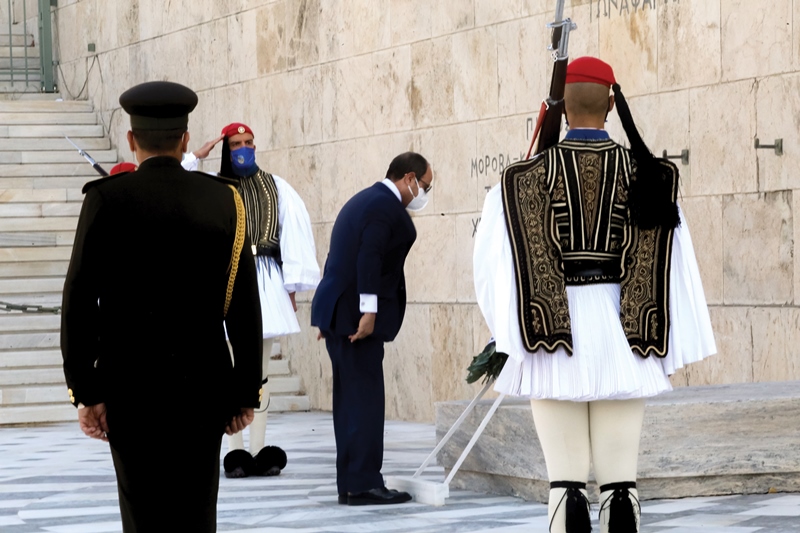 Pictured above: President of the Republic Katerina Sakellaropoulou grants a State Ceremony for visiting Egyptian President Abdel Fattah Al-Sisi; President Al-Sisi and Prime Minister Kyriakos Mitsotakis give statements to the press; the two delegations in conference; with Parliament President Constantinos Tasoulas; Foreign Minister Nikos Dendias welcomes the visiting Egyptian Head of State; President Al-Sisi, accompanied by Minister of National Defence Nikos Panagiotopoulos and higher members of the Greek Armed Forces, lays a wreath at the Tomb of the Unknown Soldier.