Visit of the US Secretary of State; deepening strategic partnership 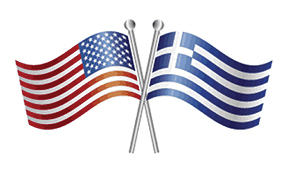 Greece and the United States reaffirmed their excellent bilateral relations and mutual desire to further deepen cooperation in a series of areas, from defence and security to investment and energy and to education and culture, as well as the developments in the wider Eastern Mediterranean region, according to a joint statement released after the meeting of Foreign Minister Nikos Dendias and his American counterpart Mike Pompeo, which took place in Thessaloniki at the end of September. The two sides conducted a high-level review of the US-Greece Strategic Dialogue, ahead of the third Strategic Dialogue to be held in Washington in 2021.

During his visit to Thessaloniki, the US Secretary of State also participated in a round table discussion on energy, in the presence of Environment and Energy Minister Costis Hatzidakis, followed by the signing of an agreement on scientific and technological cooperation between Greece and the USA, in the presence of Development and Investment Minister Adonis Georgiadis.

After Thessaloniki, the US Secretary of State travelled to Crete, where he visited the Souda Naval Base to underline the strong US security partnership with Greece.

The visit of US Secretary of State Mike Pompeo, the second visit in just one year, reflects the key role that Thessaloniki plays as a growth centre for the Balkans and the role that Souda plays for geostrategic planning in the Eastern Mediterranean and the Middle East. Secretary Pompeo’s visit highlights the renewed strategic relationship and the special weight of Greece as a factor of stability and security in the wider region.

On the occasion of this high-level review, they confirmed their mutual desire to deepen cooperation, in particular in the areas described below.

The United States and Greece shared views on the Eastern Mediterranean and reaffirmed their belief that maritime delimitation issues should be resolved peacefully in accordance with International Law.  In this regard, the United States welcomed Greece’s confirmed readiness to engage with other countries in the region to achieve maritime delimitation agreements through dialogue and in accordance with International Law.  The United States and Greece also reiterated their dedication to enhancing their close cooperation as NATO Allies, using all appropriate means at their disposal to safeguard stability and security in the wider region.

The two sides reiterated their desire to continue and strengthen their cooperation in various sectors within the framework of the 3+1 format (Cyprus, Greece, Israel and the United States), which was launched in Jerusalem in March 2019, as this partnership can contribute to the promotion of peace, stability, security and prosperity in the Eastern Mediterranean and the wider region. The United States and Greece reiterated their support for the integration of all the countries of the Western Balkans into European and transatlantic institutions according to the choice of their citizens. They highlighted Greece’s efforts to this end, noting the continued relevance of the Prespes Agreement and North Macedonia’s subsequent accession to NATO, while underscoring the importance of its consistent implementation in good faith.

Greece and the United States expressed their intent to further enhance their strategic defence and security partnership by expanding and deepening the US-Greece Mutual Defence Cooperation Agreement, which was last updated in October 2019 and greatly contributes to the security of both nations. In the coming Strategic Dialogue, both sides intend to discuss how to further assist each other in maintaining strong, capable and interoperable militaries.

The United States and Greece took note of their security cooperation based upon a shared interest in protecting the safety and security of both nations from terrorists, transnational criminal organisations and other threat actors. Despite the global pandemic, outstanding US-Greece law enforcement cooperation on arrests, seizures and extraditions has continued unabated. Moreover, the two countries took stock of continued improvement in border security and counterterrorism information sharing and collaboration according to international standards. They committed to full implementation of the 2016 Joint Statement on Greece’s participation in the Visa Waiver Programme, including beginning issuance of an updated national identification card and fully collecting and analysing air passenger data.

Secretary Pompeo and Development and Investment Minister Adonis Georgiadis celebrate the signing of an agreement on scientific and technological cooperation.The United States and Greece look forward to enhancing trade and investment between their two countries. The two Governments noted that Greece substantially improved its protection and enforcement of intellectual property in 2019, which resulted in Greece’s removal from the Office of the United States Trade Representative’s Special 301 Report this year.

The United States and Greece welcomed the inauguration of new investments and acquisitions by US companies in Greece and reaffirmed their commitment to encourage that trend. The two Governments look forward to increasing cooperation on trade. The United States and Greece attach great importance on the cooperation on artificial intelligence, cyber security, 5G and privatisation of strategic infrastructure.

The two countries remain committed to enhancing the capacity of women to prosper in the workforce, succeed as entrepreneurs and be better positioned to foster economic growth.

The United States and Greece welcomed the completion of the Greek section of the Trans-Adriatic Pipeline and looked forward to discussing at the coming Strategic Dialogue their mutual support for the Interconnector Greece-Bulgaria, the floating storage regasification unit project at Alexandroupoli, the privatisation of the Kavala underground gas storage, the Interconnection Greece – North Macedonia project and other commercially viable projects, which could include the EastMed Gas Pipeline.

Both sides welcomed the September 22nd formal establishment of the EastMed Gas Forum as a regional organisation and the on-going successful cooperation on energy through the 3+1 process.  Greece and the United States underlined the participation of ExxonMobil in partnership with Total and Hellenic Petroleum in offshore exploration blocks off the coast of Crete, as well the potential opportunities for US investment in the renewable energy sector, with the recently ratified Greek Law ‘Modernisation of Environmental Legislation’.

The United States and Greece reaffirmed the centrality of people-to-people ties in their bilateral relations. They look forward to marking Greece’s independence bicentennial in 2021, as well as exchanging exhibitions and cooperation between museums. The United States and Greece reaffirmed their intent to strengthen links between US and Greek universities and create new joint, dual-degree and study abroad programmes.

Both countries will continue to support on-going educational and academic exchanges, including the Fulbright Programme in Greece, which marked its 72nd Anniversary in 2020. The United States and Greece agreed to continue their longstanding cooperation to protect Greece’s cultural property. Both countries also agreed to cooperate on capacity building within the creative industries, including in the film sector.

The United States and Greece also agreed to explore public-private partnerships in culture and technology.

Premier meets with the US Secretary in Crete

Prime Minister Kyriakos Mitsotakis hailed the talks conducted with US Secretary of State Mike Pompeo in the island of Crete, which he described as successful. He also expressed his satisfaction that Secretary Pompeo was a guest in Chania, where the Prime Minister originates, and noted that on the island of Crete “beats not just the heart of Greece and the heart of the Eastern Mediterranean. There also beats the strong pulse of Greek-US cooperation. It is no accident that we are speaking from the 115 Battle Wing of our Air Force.”

“Souda is emerging as the most strategic location of the wider region. Here, the interests of our two countries meet, along with those of security and peace,” the Prime Minister added, stressing the special importance of this visit which, as he said, “strengthens our national line ahead of the European Union summit.”

He also sent a message of unity, pointing out that “such moments we must all be united and responsible, because if we have a positive outcome in national issues, it is not the government that wins, it is Greece.”

“A visit by the US Secretary of State to our country – even more so when it is the second within 12 months – is a political event, but especially given the time it took place, its agenda and the overall climate, I think it was very important. It produces results on many levels, it has a large national scope and I think that Greece, as a whole, has every reason to be satisfied with this visit,” he said and added:

“I think that the positive footprint for our country is proven by the irritation it caused on the other side.”

The Prime Minister also referred to Secretary Pompeo’s visit to Thessaloniki, stressing that “bilateral cooperation in many areas was discussed. In the discussions we had in Crete, security issues obviously dominated. It was agreed that unilateral actions in the Mediterranean should be avoided, as well as that all members have the obligation to respect International Law.”

Regarding defence issues, he said “that the presence of the most modern ship of the American fleet, the USS Hershel Williams in Souda, says a lot about the future of our defence cooperation.”

“The upgraded agreement for mutual defence cooperation between Greece and the USA extends its action to the area of our joint defence industry, with its spearhead being the modernisation of 84 F-16s, but also with joint programmes and very important joint investments in Greek shipyards,” the Prime Minister noted.

“I think that on the diplomatic level also, what was said about Greece as a factor for stability in the region was very important. Let us not forget that a few days ago Mr. Pompeo was also in Cyprus. I believe that there is a very clear picture that the United States has vital interests in the Eastern Mediterranean that it is not prepared to forfeit,” the Premier added. 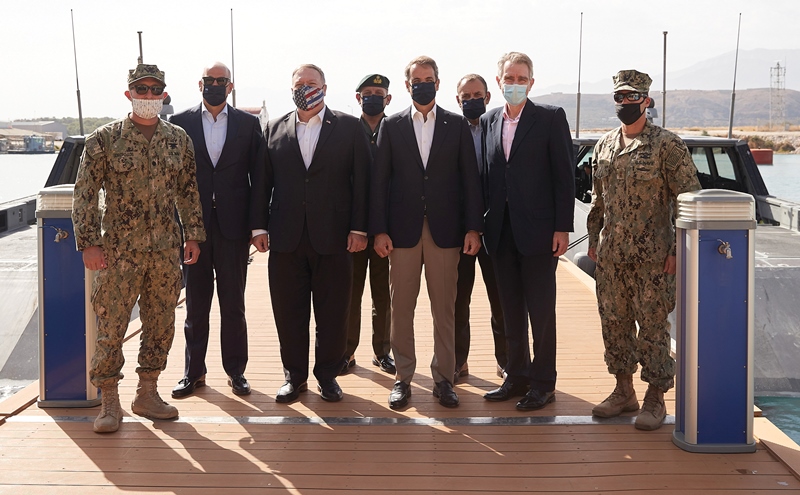 “The Turkish behaviour will be examined in the upcoming EU Summit in detail there and I hope that the message to Ankara will be absolutely clear: unilateral actions cause side effects, aggressive moves bring similar responses, so provocations must stop in order for dialogue to begin on our difference with Turkey, which is nothing more than the delimitation of maritime zones in the Aegean and the Eastern Mediterranean,” he elaborated.

Once again, Premier Mitsotakis said that “our position is very clear, that the time for diplomacy has come and it is now up to our neighbours to prove in practice if they really want a de-escalation and dialogue. Otherwise Europe has other ways to protect its interests, but also the broader security of the Eastern Mediterranean region.” 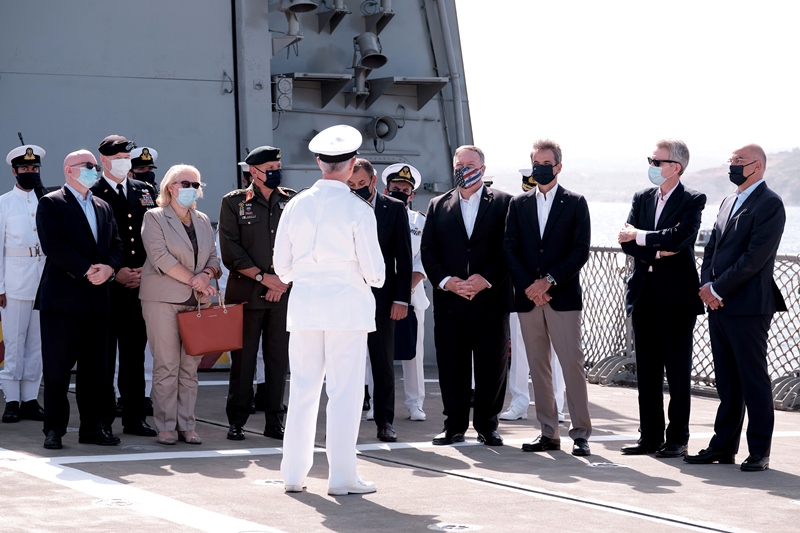