Canada is ready to be “an honest broker”

Foreign Minister Nikos Dendias met with his Canadian counterpart, Francois-Philippe Champagne, on October 13th for talks focusing on bilateral, regional and international issues, with emphasis on Turkey’s illegal actions in the Eastern Mediterranean, the situation in Nagorno-Karabakh, cooperation within the context of NATO and EU-Canada relations.

No exploratory talks between Greece and Turkey can take place while the Turkish research ship ‘Oruc Reis’ remains within the Greek continental shelf, Foreign Minister Dendias said following the meeting. During joint statements to the press, Minister Dendias said that “following yesterday’s new, illegal Navtex for research just 6.5 miles from our shores, Turkey’s leadership has proven it’s not a reliable interlocutor. Instead of dialogue, instead of exploratory talks they had committed to propose dates for, they again chose escalation and the direct threat against peace and security in the area.”

Speaking of a long-term friendship between Greece and Canada, based on common values and respect of democracy, among others, the Greek Minister conveyed the appreciation of the Greek Government for Canada’s decision to welcome for relocation 50 families of vulnerable asylum applicants. He also conveyed his condolences for the loss of life of the crew of a Canadian helicopter that crashed in the Ionian Sea while on a NATO operation.

Canada is ready to be “an honest broker” in a growing dispute between Turkey and Greece over offshore exploration rights in the eastern Mediterranean, Foreign Minister François-Philippe Champagne said. Minister Champagne was in Greece for the first stop of his week-long tour of European capitals to discuss with his allies the tensions in the Eastern Mediterranean, the war between Azerbaijan and Armenian forces in Nagorno-Karabakh and the situation in Belarus. Minister Champagne expressed Canada’s interest in serving as mediator between Greece and Turkey and said the country had submitted proposals to that effect to NATO’s Secretary General Jens Stoltenberg. It should be clearly stated that Turkey must remain in the NATO alliance he underlined, adding that it is possible to achieve de-escalation through the alliance framework.

The visiting official also noted that Canada is already the largest non-EU investor in Greece; additionally, he cited examples of Canadian companies working in Greece, as in the metallurgical sector. Both countries are examining further collaboration opportunities, he said, promoting green economy and electromobility. Canada, he noted, wants to become “the best transatlantic partner you have.” Greece is a stable country and a State of law and order and these aspects provide a guarantee for further collaboration, he emphasised.

The top Canadian diplomat also met with Greek Prime Minister Kyriakos Mitsotakis to discuss bilateral relations and the tension the Eastern Mediterranean. A statement from the Greek Prime Minister’s office said the two sides discussed “possibilities for political, economic and defence cooperation between Greece and Canada”. The office said that the Premier had also raised the issue of Turkish activities in the eastern Mediterranean which Athens says violate Greek and Cypriot sovereignty. 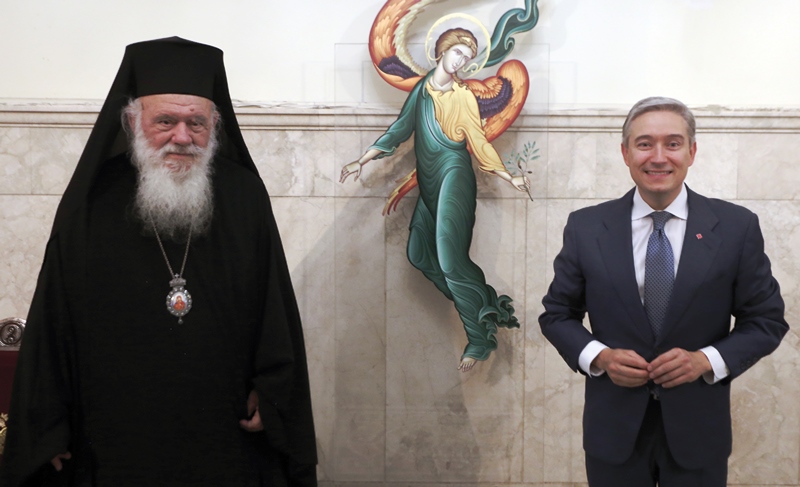 Pictured above: Visiting Canadian Minister of Foreign Affairs, Francois-Philippe Champagne, gives joint statements to the press with Greek Foreign Μinister Nikos Dendias; the two delegations, headed by the Foreign Ministers, meet with Prime Minister Kyriakos Mitsotakis. Right: Minister Champagne is granted an audience with the Archbishop of Athens and All Greece, Ieronymos II.