The preservation of public health goes beyond any financial dimension and within this context the 85th TIF did not take place this September. However, the leading institution of Thessaloniki, which has 94 years of history, counting 84 editions of the Fair, did not remain silent, as on the days during which the Fair was planned, TIF-Helexpo SA organised a political-economic forum, declaring itself present in the rapid developments of the recent months.

TIF-Helexpo continues to be on the ramparts, planning the future, despite the adverse conditions, elaborating a series of new ideas and actions, in order to be ready for the day after. Besides, exhibition activities will not stop, as they constitute a catalyst for economic growth in Greece.

The subject of the Thessaloniki Helexpo Forum, organised by TIF-Helexpo from 11th to 20th September at the ‘I. Vellidis’ Congress Centre, was ‘Politics, Economy and Society, Searching for Balance’.

Within the framework of the forum, all the most current and hotly debated topics that concern politics, the economy and society under the new conditions shaped by the pandemic were discussed over 24 panels, with dozens of speakers, including the entire political leadership of Greece.

Prime Minister Kyriakos Mitsotakis took this opportunity to present two major policy portfolios to lead Greece ‘stronger into the future’. The Greek Government aims to relieve society from the consequences of the pandemic crisis and keep the country on a growth course, he said during his policy speech at the Thessaloniki Helexpo Forum.

“It is undoubtedly an unprecedented event. The pandemic did not allow the operation of the 85th International Fair. This time there were not the usual business meetings, or the parallel events,” the Premier said, adding that the image of today’s speech, with only 50 participants wearing masks, keeping distances, was as a result of the measures taken for the particular conditions that surround us.

“I will present the broader Government strategy for the coming period,” he said, adding that his presence in Thessaloniki was to honour the city and Northern Greece and to present, with realism, the consequences of the coronavirus pandemic on society and the economy and to speak about the challenges of the country’s national policy in the Eastern Mediterranean. The Prime Minister said that his priority was to present the steady steps that the country will take in an unstable environment in the autumn and the coming winter, “because nothing in the world will be the same as yesterday.”

“Besides the agony and insecurity, there rises a new self-confidence, a new national optimism, that the State and citizens together will make it and exit this adventure stronger,” he said. “The crisis hit the entire planet,” he said, adding that the Government also had to deal with the intensified migration flows. “It is true that in the months that passed there was much turbulence. But that’s why I am here, to deal with the difficulties. To send a message that we can make it all together”.

“The Government plan, specialists’ instructions and the responsibility shown by citizens have made us leaders in the defence against the virus,” the Premier said, adding that even when the economy restarted the country properly managed the new wave of the pandemic. He did add however, that “as a double health crisis seizes the planet again, our country continues to manage the national front as well, since Ankara adds to the challenges in the Aegean, by undermining peace throughout the Mediterranean. It threatens the borders of Europe and undermines security in a crucial crossroad of three continents. Against threats and slogans, Greece responds with logic and arguments.”

Prime Minister Mitsotakis noted that the other side of the country’s strength is efficient diplomacy, adding that the country has proven that it has many and strong allies. “That’s why I insist that only the epilogue of provocation can become the prologue of talks.” 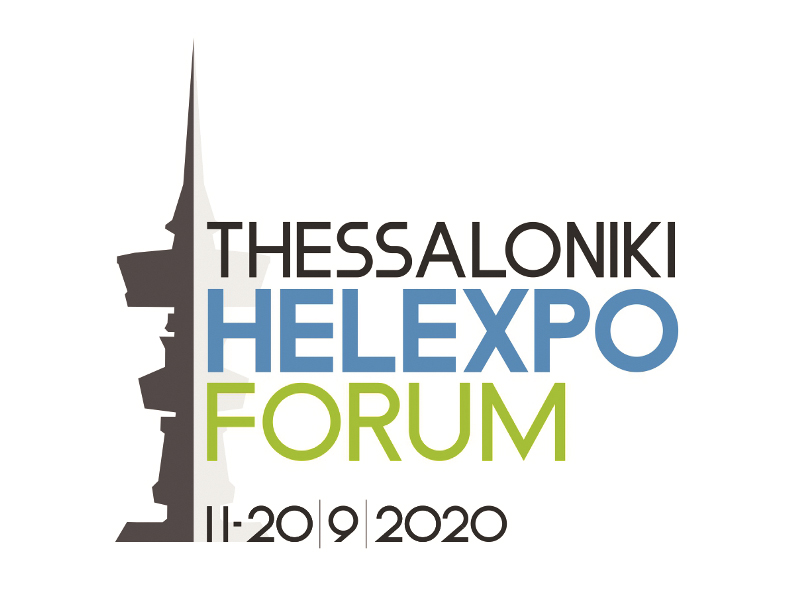 The Greek PM said that because of the dimensions of the pandemic’s crisis, every long-term combination could remain in the balance and every policy announcement unfulfilled. He added however, that this autumn and winter hides both traps and opportunities, that’s why they demanded not only long-term plans, but immediate short-term measures as well. “There is no vision for tomorrow unless today is served with consistency,” Premier Mitsotakis said, adding: “Nor economic recovery without social ascension. The programme of our actions has one slogan: self-confidence”.

The Prime Minister noted that in the previous years, the country’s defence sector was in conditions of disinvestment. “The time has come for a balance between needs and capabilities; time to strengthen our Armed Forces for the security of the country, but also as the top obligation to Greeks who will carry the burden. It is the price for our position on the map”.

He announced six emblematic decisions to “multiply the strength, operation and efficiency of Greek Armed Forces”.

“First, the Air Force will immediately be strengthened with a squadron of 18 Rafale fighter aircraft which will replace older Mirage aircraft. These are 4th generation aircraft. A move strengthening our defence power which, combined with the modernised F-16 aircraft and other aircraft, together make a force not to be ignored by anyone.

Second, the Navy begins procedures to include in its fleet 4 new multiple task frigates and to upgrade 4 MEKO frigates currently operating. These new vessels will be accompanied by 4 Navy Romeo helicopters, making our seas more fortified than ever.

Fourth, the Armed Forces will be renewed with the addition of 15,000 men and women with a 5-year term. The whole framework of military service and education will be re-assessed.

Sixth, the Armed Forces will strengthen their digital operation to deal with any hybrid-type cyber-attacks.

These are 6 brave choices. Six bold answers not only to meet current needs, but also the challenges of history.”

These measures will support the Greek economy with 6.8 billion euros. ‘The National Self-Confidence Plan’ protects and boosts employment,” the PM said.

“The pandemic is not only hitting public health, but the national economy as well, and the Government responded last spring with a package of measures that are being constantly enriched, depending on arising needs. These new 12 initiatives aim to protect employment and productive activity as long as the pandemic crisis remains, supporting the income of the weaker. These are 12 steps of confidence, creating a road map for the coming months and 2021, so that the economy remains standing tall as a precondition for growth. Four of these initiative support labour, three liquidity for enterprises and investments and another five incomes of the weak and of the middle class which have suffered for several years. I will say it again they are the backbone of Greek society”.

Premier also referred to a reform plan for the next 12 months. “The crisis cannot be an alibi to suspend big changes,” he noted and presented these changes:

– Modernising the labour market based on recommendations made by the International Labour Office, introducing new rights safeguarding the future of labour and encouraging new job positions.

– Reforming supplementary insurance with the introduction of a capital-based system.

– Introducing new rules for debt settlement to the State and banks, offering a real second chance to businessmen, professionals and mortgage borrowers.

– Speeding-up justice with the digitisation of procedures.

– Greece will have a Professional Education System, evaluation of school units, their work and the work of teachers.

– Strengthening the national health system by reorganising healthcare and hiring 4,000 personnel (mostly with those who served during the pandemic).

– Submitting a draft bill on multi-level governance for local authorities.

“Today, the leading role is Self-Confidence of Greeks. These two programmes for Defence and the Economy, two bridges that will lead the country and Greeks out from uncertainty, into certainty; from turmoil to the calm waters of progress and hope,” the PM said. 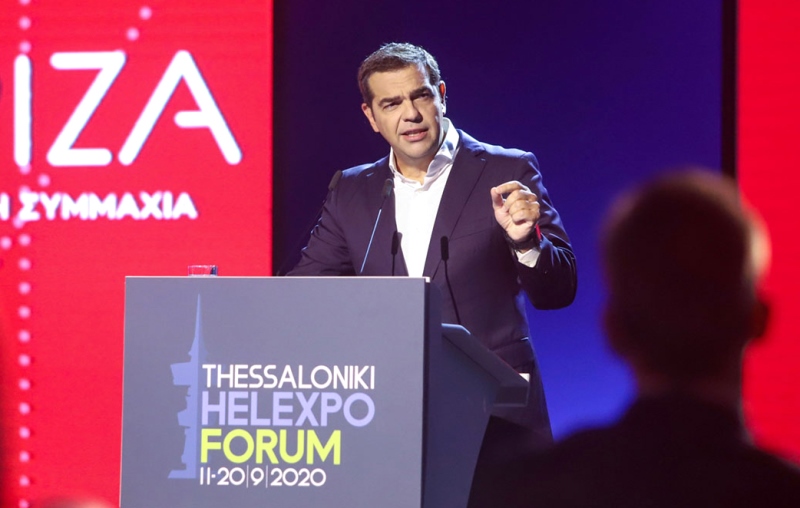 Addressing the people of Thessaloniki and Macedonia, SYRIZA-Progressive Alliance leader Alexis Tsipras said that Syriza as Government “resolved a long-standing issue with our northern neighbours, as Greece’s interests dictated.” Despite his acknowledging a “change of heart in Mitsotakis to serve national interests, he still owes an apology” to the Greek people “for deceiving them”, Tsipras insisted.

The current Prime Minister “also deceived the Greek people in terms of the economy,” he added, saying that he promised more jobs and a robust economy and “brought the country to recession in the fourth quarter of 2019 and the first of 2020 even before the pandemic.”

Asked why the ex-government had not introduced some of the measures he had presented at the same venue, Tsipras said that Syriza came to power under very different circumstances than the current ones and had to deal with empty coffers while being pressured to provide high primary surpluses.

“Today, the Government has at its disposal 37 billion euros in reserves of public funds that we left behind, and access to cheap borrowing,” he stressed, adding that the permanent measures Syriza proposes total 3 billion euros and “are required, absolutely realistic and doable, based on fiscal ability.” He charged that “if the Government is not implementing them, it’s because it doesn’t want to, not because it cannot.”

He detailed what he called the multiple crises Greece is facing – in health, the economy, democratic processes, ethics, society and national – and claimed “the Government is not telling the Greek people the truth.”

Stressing that the pandemic brought an end to the “omnipotency of the market”, he proposed a new Social Agreement and the introduction of 11 emergency measures to help employees, businesses and the market.