MED 7 countries deliver an unambiguous message of solidarity to Greece and Cyprus; a coordinated European effort is deemed necessary within the Mediterranean territory, calling upon Ankara to abstain from further provocative and unilateral actions in the Mediterranean. 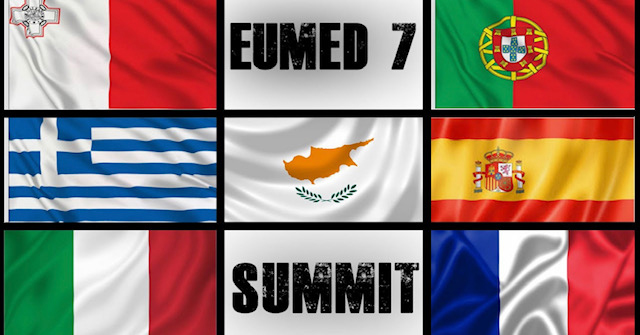 The EU Med Group, widely known as MED7, met in Ajaccio, Corsica, on September 10th. The alliance consists of seven Mediterranean countries which are Member States of the European Union, namely Cyprus, France, Greece, Italy, Malta, Portugal and Spain. The most critical issues the top of the meeting’s agenda were the current developments in the Mediterranean, predominantly the Migrant Crisis and unilateral Turkish actions against Greece and Cyprus.

French President Emmanuel Macron, the official host of the meeting, opened the joint press conference of the seven country leaders. President Macron initially talked about the worrying issue of the uncontrolled migrant flows from Libya stating that the problem should be immediately dealt with.

The French President grabbed the opportunity and attacked Turkey, stressing that Ankara should adhere to the 2016 Turkey-EU deal over the refugee crisis and stop acting unilaterally. He also emphasised the important need for absolute respect towards the arms embargo on Libya, commenting that there have been some discrepancies from Europe so far, indirectly criticising the stance of Germany.

Regarding the tensions in the Eastern Mediterranean, President Macron used clear and decisive language, delivering an unambiguous message of solidarity to Greece and Cyprus and talked about illegal drilling and unilateral provocations from the Turkish side. He stated that Europe is seeking a bona fide dialogue, but the Turkish reactions so far, are making this initiative rather difficult. Under any circumstances, Paragraph 6* of the MED7 Joint Declaration would be strictly applied, and this is something that the French President has emphasised, even though the context of Paragraph 6 with regards to the EU response towards Turkey still remains somehow generic. The French President concluded that a coordinated European effort is deemed necessary on other critical issues within the Mediterranean territory, like Lebanon and Syria.

The Greek Premier said that European support for Greece and Cyprus should not be just an act of solidarity, but a self-conscious action to protect the strategic interests of the European Union.

Greek Prime Minister Kyriakos Mitsotakis followed President Emmanuel Macron. The Premier opened his speech with the recent events in the Moria camp in the Greek island of Lesbos. He thanked the other European countries for their essential support on this developing crisis and underlined that the immigration challenges, are correctly treated as a common European problem.

Prime Minister Mitsotakis also condemned the constant violation of Greek-Cypriot rights from Turkey and referred to the illegal occupation of the northern part of Cyprus since 1974. He called upon Ankara to abstain from further provocative and unilateral actions in the Mediterranean and he recalled that President Macron has characterised the region as Mare Nostrum, Our Sea, implicating that the European South should be the key player in this region of vital importance. He further said that European support for Greece and Cyprus should not be just an act of solidarity, but a self-conscious action to protect the strategic interests of the EU.

In the joint press conference of the ‘7’, Prime Minister Mitsotakis spoke about a very “clear message in Turkey”. “The conclusions of the Summit in paragraph 6 send a very clear message. They show the way for Turkey. If it really wants an honest dialogue with Greece, Cyprus and the EU, it must prove it in practice; to stop unilateral actions, to give convincing signs that it strictly respects international rules and not selectively.” “End of challenges, beginning of discussions,” he stressed initially, clarifying that “the Mediterranean is a vital area for European security as a whole and is not assigned to third parties”. “In the run-up to the European Council (September 24th-25th), we will prevent Turkey from attempting to divide Europe. Support for Greece and Cyprus is not an expression of solidarity, it is a recognition that strategic interests for Europe are at stake,” he added, noting that Turkey has time to take a step back. “To abstain from maritime and research activities in undelineated maritime zones, to return to the table of exploratory talks, from where it left in 2016, and if we do not agree, there is always the solution of the Hague Tribunal,” he said.

“This is the first time I have participated in the Euro-Mediterranean Conference and I can say that since its inception it has never had to face so many and complex challenges. Our sympathy has never been so strong. I wish next year, when the meeting will be hosted in Crete, that all things will be much more optimistic,” the Greek Prime Minister concluded in his statements.

Cypriot President Nicos Anastasiades mentioned that the weight of the immigration crisis is disproportionate for Cyprus, which is a front-line country. He harshly criticised Turkey for using the asylum seekers as a tool of geopolitical pressure and said that a new EU asylum deal to control the migrant flows is deemed necessary. President Anastasiades talked about reckless Turkish actions that pose a risk for the wider area and complained about Ankara’s continuous war rhetoric. He also called the other countries to assist in ending the Turkish illegal exploration and drilling operations in Greek and Cypriot maritime zones. The violation of International Law and of the sovereign rights of two EU Member States are not only threatening the reliability of the European Union, but also the integrity and security of the continent as a whole he said. The Cypriot President aligned with the comments of the Greek Prime Minister, and reaffirmed that if the dialogue with Ankara is not fruitful, the Hague should definitely be an option, but also harsh sanctions against Turkey should always be on the table.

Italian Prime Minister, Giuseppe Conte, praised the importance of the southern countries of Europe in dealing with EU challenges. Talking about the immigration challenges, he confirmed that the South should stop simply dealing with the results and start acting proactively. Coordination with third countries, countries of origin and transit countries, is deemed necessary to reduce the flows in European territory, while the elimination of the migrant smugglers should always be on the top of the agenda. Regarding the Greek-Turkish dispute, the Italian Prime Minister expressed his absolute solidarity toward Greece and Cyprus, condemning unilateral actions by Turkey and noted that he fully trusts the German Presidency of the EU Council and the actions of the European Council, which could lead to a swift de-escalation.

The Prime Minister of Malta, Robert Abela, clarified that cooperation between neighbouring and friendly countries is of critical importance, expressing his full solidarity to Greece. Even though the neutral status of Malta is clearly defined in the country’s Constitution, Premier Abela stressed that International Law and sovereign rights must not be challenged under any circumstances. The Maltese Prime Minister emphasised the importance of peace and stability in the Eastern Mediterranean, saying that he is really optimistic over the results that the MED7 coordination could bring. Finally he referred to the refugee crisis, which is directly affecting his country, stating that the emergency could only be managed through the establishment of peace in Libya and the prompt reconstruction of a viable economy for the country.

The Prime Minister of Portugal, António Costa, initially discussed the Covid-19 European and global geopolitical challenges. He expressed his solidarity to Cyprus and Greece and made a special reference to the important role of the EU High Representative for Foreign Affairs, Joseph Borel, and the President of the European Council, Charles Michel. Premier Costa repeatedly stated that a solution should be sought through negotiations and multilateral dialogue.

The Spanish Prime Minister, Pedro Sánchez, focused on the immigration crisis, expressing his solidarity for the Moria incident and calling for responsible actions from the EU, adequate border control, and a dual approach that could ensure the security and well-being of the European people, always with respect for human rights and humanitarian values. In the Eastern Mediterranean front, Premier Sánchez highlighted that dialogue should be the only way forward and de-escalation has to be the top priority for Europe, through a process dictated by the European interests and led by the European institutions.

(Photos: D.Papamitsos/Office to the Prime Minister.)

Previous The national exhibition organiser continues to plan for the future
Next www.staellinika.com platform for teaching and learning Greek language and culture