‘Staying at Home, Traveling through Literature’

Message from the Secretary-General for Public Diplomacy,
Religious and Consular Affairs
Konstantinos Alexandris

The General Secretariat for Public Diplomacy of the Ministry of Foreign Affairs actively participates, within its competence, in the efforts to tackle COVID-19 pandemic. With the aim of raising public awareness and transmitting the message that in this fight we all stand together, we also join forces in promoting the public campaign #menoumespiti (#stayathome).

The “Staying at Home, Traveling through Literature” project invites us all to re-visit Greek poetry, make our time at home more creative and eventually overcome the physical barriers through the power of spirit.

This project could not be realized without the support of the foreign ambassadors (accredited to Greece) who accepted our invitation with great enthusiasm, thus spreading a message of international solidarity in these times of hardship. Therefore, I would like to cordially thank and congratulate them for their cooperation.

As our Nobel laureate in literature, Odysseus Elytis, said, “poetry begins where death is robbed of the last word.” So, please come on board and let yourself take most of courage and inspiration from the Greek literature.

ATHENS – In a charming video, part of the Staying at Home effort, Menoume Spiti, diplomats from around the world, including Austria, France, Sweden, Mexico, China, Slovenia, Israel, the Netherlands, and the UK, recite from some of the most well-known authors of Greek literature. Some of the diplomats chose to recite in their own language while others chose English or Greek.

An initiative of the ministry’s General Secretariat for Public Diplomacy, Religious and Consular Affairs, the first of a two-part video titled ‘We #stayhome and travel through literature’, shows some of the ambassadors reciting Greek text, while others recite in their native language and a few recite in English. All excerpts are the ambassadors’ personal selections.

“Through the universality and timelessness of Greek literature, from Homer to the present day, they are sending their own message of international solidarity against the pandemic,” the General Secretariat said in a statement.

The texts included works by Homer, Constantine Cavafy, Odysseas Elytis, and Titos Patrikios and is apparently the first of a series. 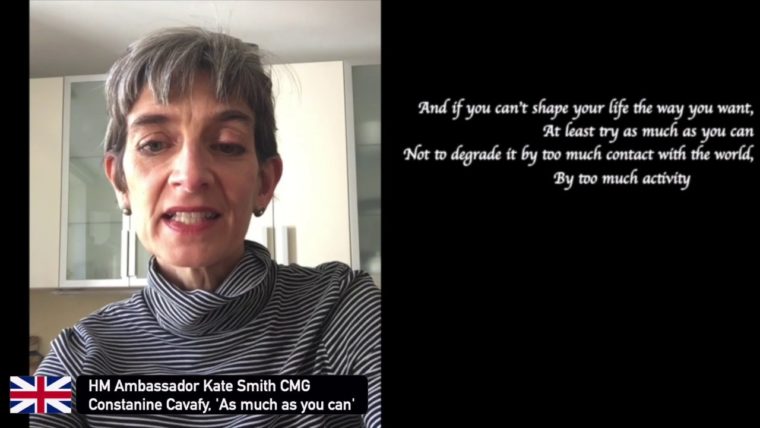