In support of the friendly Spanish people, who have been hit hard by the pandemic, the Spanish flag was raised in a symbolic ceremony on April 10th at the central building of the Ministry of Foreign Affairs, with the President of the Hellenic Parliament, Konstantinos Tasoulas, Alternate Minister of Foreign Affairs Miltiadis Varvitsiotis and Spanish Ambassador Enrique Viguera in attendance.

The Greek Parliament, following a decision by Parliament Speaker Konstantinos Tassoulas and as a sign of support for the Spanish people due to the Covid 19 pandemic, illuminated the Hellenic Parliament for three nights in the colours of the national flag of Spain.

During the symbolic ceremony, Parliament Speaker Konstantinos Tassoulas, accompanied the Ambassador of Spain to Athens, Enrique Viguera, Foreign Minister Nikos Dendias and Deputy Minister of Foreign Affairs Miltiadis Varvitsiotis, paid tribute to the national flags as they were hoisted above the Hellenic Parliament.

The initiative to raise the Spanish flag on the Greek Parliament came after a proposal by Foreign Minister Dendias to the Speaker of Parliament. Prior to this event, the Greek and Spanish flags were also raised at the Greek Ministry of Foreign Affairs. 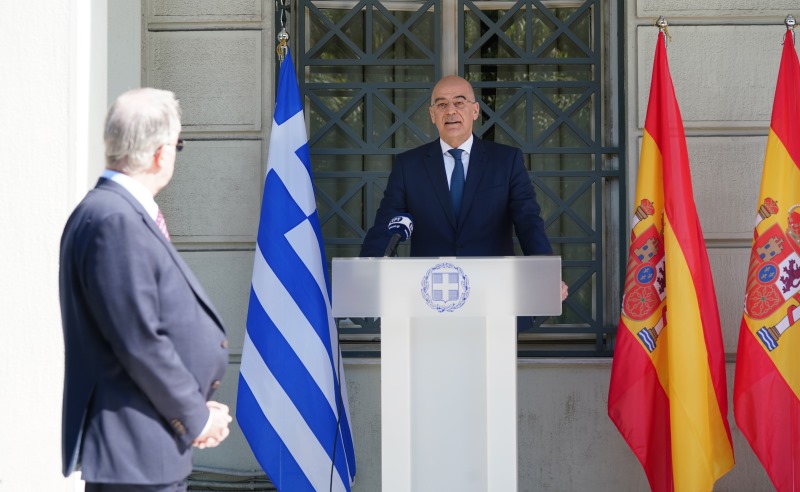 (Our Spanish Friends, today, we see the flags of Greece and Spain flying united to the sound of our National Anthems, in the presence of my dear friend the Spanish Ambassador, Enrique Viguera, in a symbolic gesture of solidarity with the friendly Spanish people.)

(Dear Spanish Friends, in these difficult moments, you are not alone. The thoughts of all Greeks are with you in this struggle that we will win together.)

The crisis we are facing is, by common admission, the biggest crisis European generations have faced since World War II. But let us remember that it was from the ashes of the war that the ambitious experiment of the European Union – our common family – rose; the most ambitious experiment between states and peoples that the world has ever seen.

It is time to do what is necessary to ensure that, when the crisis has abated, the Union will have risen to the unique circumstances so that we can emerge united and stronger from the crisis. This means leaving no one behind. No state, no citizen, no victim. It means having strengthened the foundations of our common European home – built with such wonderful materials, of which solidarity has always been the most vital.

Allow me to exclaim: Viva España! 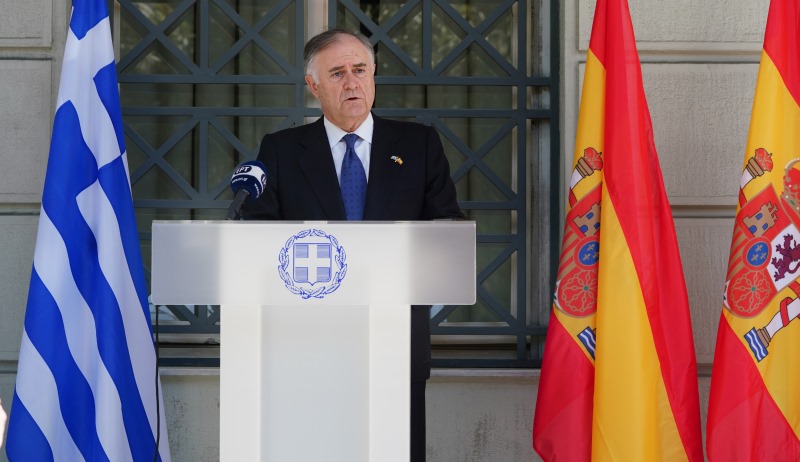 As Ambassador of Spain to the Hellenic Republic, I would like to express my sincere gratitude to you, the Minister of Foreign Affairs, the Ministry of Foreign Affairs, the Parliament, for organising this moving ceremony, as a way to show Greece’s solidarity with my country, who is suffering as you know a tremendous human tragedy as a result of the Covid-19 pandemia. Our sorrow is deep as more than 15,000 of my compatriots have lost their lives, as a consequence of this virus, particularly old people.

But Spain does not lose hope. Also more than 15,000 people have already recovered from the disease, the highest number in the world after China. And recent data indicate we may be entering a new phase where the number of infections or fatalities is stabilising or even decreasing, whereas the number of the healed continues to rise.

My recognition to Greece is even more sincere, knowing that the Greek people are also enduring a lockdown and other tough measures decided upon by the Government to fight the pandemic. As a Southern European country, accustomed as we are, like you, to enjoying most of our living outside, in the open air, under the beautiful Mediterranean sun that we share, we know only too well how difficult confinement can be. Allow me also as a resident of Athens to praise the Greek Government for its wise management of the situation, thanks to which the sanitary consequences here in Greece are not as dramatic as in most European countries.

Dear friends, showing your solidarity to Spain through this ceremony today is a good reminder for us to realise who our real friends really are. Let me assure that this gesture will not be unnoticed in Spain.

Finally, let me also thank the many women and men of this country, including the President of the Republic, who have found the time to share with us, in such difficult circumstances, their messages of grief and solidarity.

In the name of representation of Spain and the Spanish people, I say to you all, thank you very much. 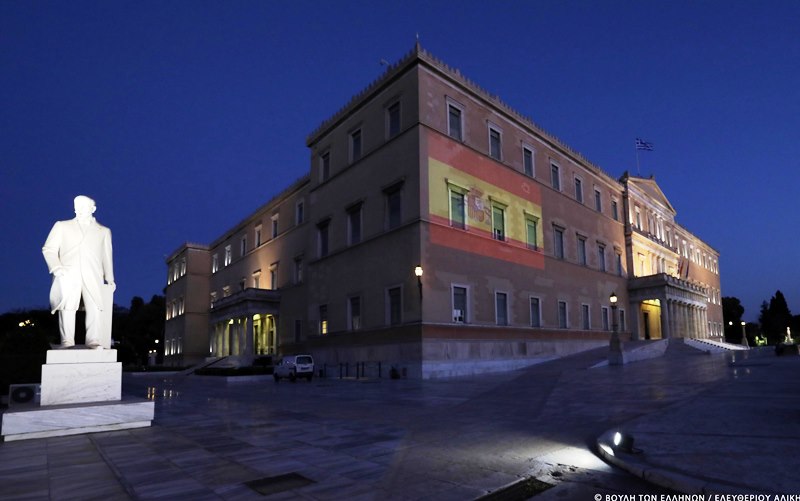