Minister of Foreign Affairs of Greece, Nikos Dendias, and his Russian counterpart, Foreign Minister Sergey Lavrov sign the joint Greece-Russia Consultations Programme 2020-2022, which foresees regularly held meetings at both political and in-house levels; the two delegations in conference in Moscow.

Relations are defined by a centuries-long history and friendship

The meeting of Foreign Affairs Minister Nikos Dendias with his Russian counterpart Sergey Lavrov in Moscow on November 6th was held in a very cordial atmosphere and turned a new page in Greek-Russian relations, on the basis of a sincere dialogue, Minister Dendias said during joint statements to reporters with Minister Lavrov after their meeting.

“Our bilateral relations are founded on timeless ties of friendship, mutual respect and understanding,” he noted, underlining the significance of the joint Greece-Russia Consultations Programme 2020-2022, which the two Ministers signed and which foresees regularly held meetings at both political and in-house levels. 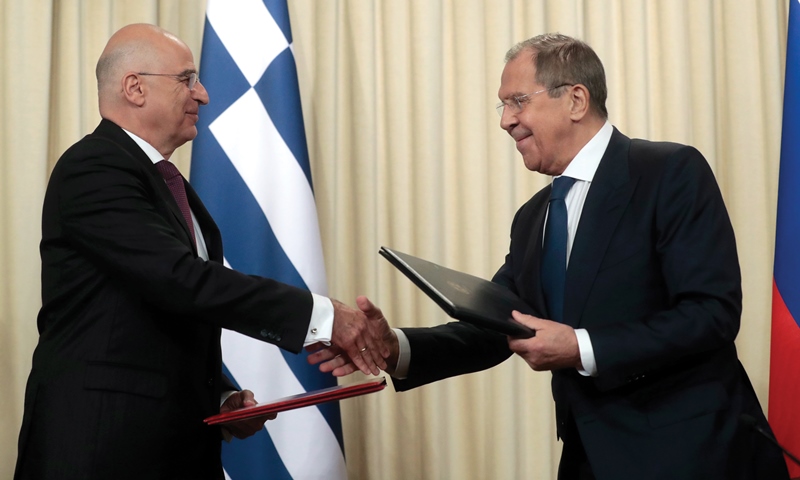 Minister Dendias pointed out that as Greece is emerging from the financial crisis it is returning to international fora and it intends to take advantage of its geographical position as a NATO member and a member of the European Union, and even the Council of Europe, whose presidency it will assume next year. “Given Greece’s position as a veteran EU and NATO member-state, we seek to contribute positively to the dialogue with Russia. We want to further develop our relations in view of maintaining regional stability and enhancing security, especially at this sensitive conjuncture,” he elaborated.

Minister Dendias expanded on the diplomatic outlook and said that “given the consistent stance of Greek foreign policy that Russia is part of the European security framework, Greece can prove particularly useful to Russia, if the latter wishes so, in building the necessary understanding, resolving existing differences, comprehending the measures needed toward a normalisation where necessary, and in overcoming unpleasant realities by eliminating their causes,” he emphasised.

The Greek Foreign Minister invited Russian companies to invest in Greece and cited his Government’s latest development bill, which reduces bureaucratic procedures quite considerably, as an attractive incentive for investors. “We underlined the fact that several synergies have so far grown between Greek and Russian companies, primarily in the natural gas sector, but we are also interested in boosting cooperation in renewable energy sources too,” he noted.

The migration crisis, its challenges and inherent dangers were also discussed, on which Minister Dendias said that “Greece underlines that it is unacceptable when the protection of thousands of people becomes a tool of political influence.” He then referred to the Cyprus issue, with Greece “supporting the efforts of UN Secretary General Antonio Guterres to solve the issue based on the UN Security Council’s Resolutions.” On the latter, he added that “changing this anachronistic system of security guarantees to a system actively participated by the Security Council, is a timely change.”

On his part, Minister Lavrov said that “our relations are defined by a centuries-long history and characterised by mutual affection.” “2021 will mark the bicentenary of the Greek War of Independence, which gave rise to the independent Greek State, an event to which our country contributed in every possible way,” added Minister Lavrov and revealed that with his Greek counterpart “we discussed possible joint events within the context of this anniversary.” Minister Dendias noted that Greece will soon send an invitation to Russian President Vladimir Putin to participate in these commemorative events.

Minister Lavrov also conveyed the Russian President Vladimir Putin’s invitation to Prime Minister Kyriakos Mitsotakis to attend the commemoration of the 75th Anniversary since the end of World War II that will be held in Russia in 2020.

The Russian Minister said that they constructively discussed pressing issues of the regional and global agenda and agreed to maintain and deepen dialogue in the UN, OSCE, Council of Europe, as well as the Black Sea Economic Cooperation, where Greece is now the Chairman. Of course, the development of our interaction will be facilitated by the implementation of the just-signed plan of consultations between the foreign affairs agencies for 2020-2022.

Minister Lavrov said that they exchanged views on the current state and prospects of relations between Russia and the European Union, the situation within the Russia-NATO Council and on a number of issues that relate to security in the Eastern Mediterranean and the situation in the Middle East and North Africa, including the situation in the Syrian settlement. 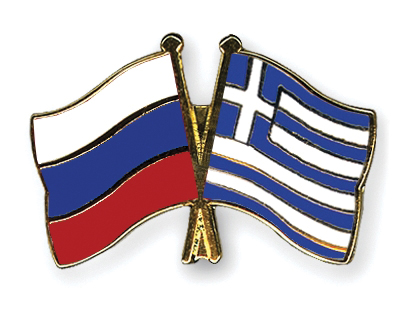 As for the problems associated with the exploration of resources on the shelf, including on the shelf of Cyprus, Minister Lavrov said that Russia invariably urges all interested countries, including Turkey, Cyprus, Greece, Israel, Egypt, to resolve these issues through the negotiation process, through the achievement of mutually acceptable agreements within the framework of the norms established by the 1982 UN Convention on the Law of the Sea.

Regarding the situation around the Cyprus settlement, the Russian Head of Diplomacy noted that the assessments of the Greek side was very useful and reminded that Russia fundamentally supports the implementation of all relevant UNSC Resolutions on the need to reach an agreement between the Cypriot parties on the creation of a two-communal, two-zone federation. “We have heard that the UN Secretary-General is preparing a trilateral meeting with an invitation from the leaders of the Cypriot communities Anastasiadis and Akinci. We welcome such contact. We believe that progress in the implementation of UN decisions on a Cyprus settlement would be facilitated by a more active involvement of UN Security Council permanent members in the negotiation process, since they are the co-authors of all resolutions on ways to overcome the current crisis. We consider it correct to aim to replace the current archaic guarantee system with guarantees from the UN Security Council, primarily its five permanent members, within the framework of the external aspects of the settlement. It is clear that, in accordance with the existing resolutions, any settlement must be approved by the UN Security Council,” he noted.

Another issue discussed was the recognition of the independence of Ukraine’s Orthodox Church, on which both Ministers agreed it isn’t an issue that affects or might affect Greek-Russian relations, while both stressed the independence of state and church. In addition, Minister Lavrov said the issue arose through the influence of the US, which he said tried to drive a wedge in the Orthodox world. As for the impact of this situation in the church world on intergovernmental and interstate relations between Moscow and Athens, we have no desire to artificially create problems, obstacles to the development of our cooperation in all areas on a mutually beneficial basis. But, of course, we can expect a reduction in the flow of pilgrims to those dioceses of the Greek Orthodox Church with which the Russian Orthodox Church has ceased Eucharistic Communion.

On the trial of financial criminal Aleksandr Vinnik (known as ‘Mr. Bitcoin’), who is currently being detained in Greece with pending extradition orders to Russia, the US and France, Minister Dendias said that “we all understand that this is a matter that rests in the hands of the Greek judicial system.” Sergey Lavrov also referred to the extradition issue of Aleksandr Vinnik and expressed his assessment that the Russian request comes before the others. He added that based on changes to the Greek penal code, the charges against Vinnik are no longer an offense and expressed hope that a fair outcome would be achieved.