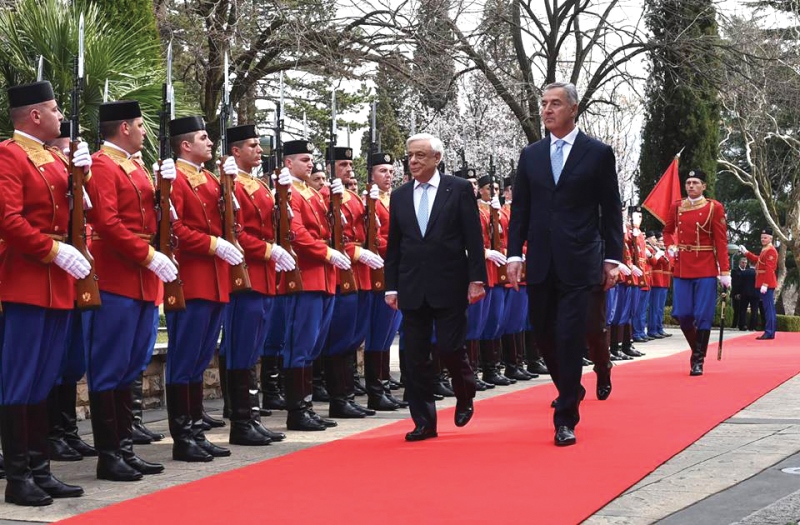 “Excellent political relations should be enhanced with stronger cooperation in the field of the economy.”

President of the Hellenic Republic, Prokopis Pavlopoulos, paid a two-day State Visit to Montenegro on March 7th-8th at the invitation of the President of Montenegro, Milo Đukanović. President Pavlopoulos’ programme included a meeting with the Parliament President Ivan Brajović and a working dinner held by Prime Minister Duško Marković. He also visited the Law School of the University of Montenegro where he addressed a lecture on the ‘Rule of Law and European Unification’. 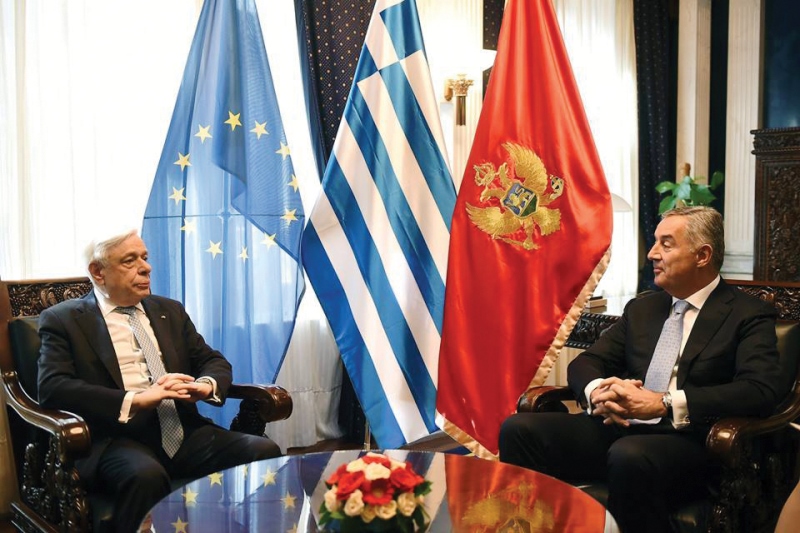 President Pavlopoulos sent a clear message from Podgorica that if neighbouring countries want to have a European future they should fully respect the European acquis and International Law and have resolved their differences with the other EU countries in the region. In his statement during his meeting with President Đukanović he said that “the European prospect of our neighbours contains two self-evident conditions, which we must point out in all sincerity. If they want to have European prospects, they must respect the European acquis and International Law.”

Referring to North Macedonia, he noted that Greece favours its accession to the EU, clarifying however that this prospect requires, in addition, full respect of the Prespes Agreement signed with Greece. The Agreement, he said, “must be interpreted and implemented in a way that will not allow any trace of irredentism. Any other tactic would obviously hinder the progress of the Republic of North Macedonia in its European accession course.”

On Greek-Turkish relations, the Greek Head of State reiterated that “Greece seeks relations of friendship and good neighbourhood and supports Turkey’s European accession prospect,” adding that “the Treaties of Lausanne and Paris, which are totally clear and comprehensive, leave no room for doubt and should be totally respected by all.” He added that regarding the Economic Exclusive Zone, Turkey must respect the Law of the Sea.

On Albania and its European prospect, “which Greece does not oppose” he said that “behaviours as those against the Greek minority constitute an insurmountable obstacle for Albania’s smooth accession to the European Union.” Another obstacle, he said, is “any claim of entirely unwarranted so-called rights of the Albanian Cams, ruthless associates of the Nazis, as it has been historically proven.”

President Pavlopoulos also referred to the Cyprus issue, noting that it is an international and mostly European issue, adding that it must be resolved as soon as possible in a fair and sustainable way.

Finally, President Pavlopoulos pointed out that the participation of all the Balkan countries in the EU is undeniably a guarantee for the peaceful co-existence and common creative course of countries and peoples of the region. Greece, he said, sincerely and practically supports Montenegro’s access to the European Union and is ready to contribute and support towards this direction. He also expressed the hope that this is the first visit of a Greek President to Montenegro after its independence and the establishment of diplomatic ties with Greece and will essentially contribute in the further strengthening of the already very good relations between the two countries. Montenegro is a country of European values and has made the most progress on the road to the EU compared to other Western Balkan countries, the President of the Hellenic Republic said during a working dinner with Prime Minister Duško Marković.

President Pavlopoulos said that Montenegro can count on Greece and all its help in further continuation of the integration process. He estimated that on this path, Europe must remain attractive with a strong European perspective for the Western Balkans region. 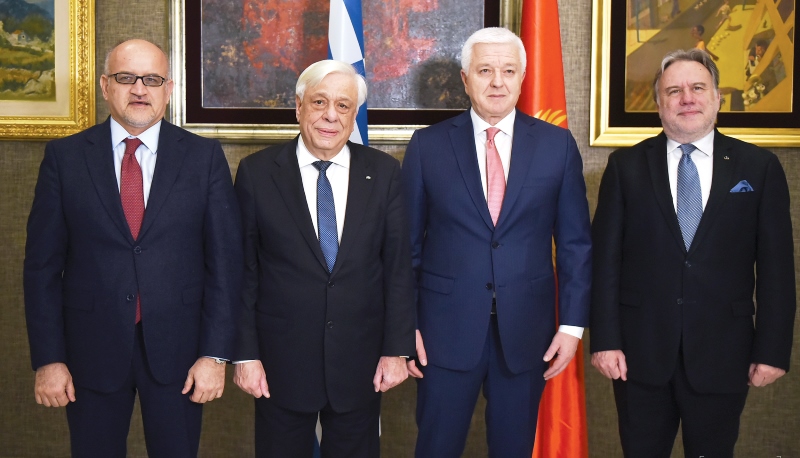 Prime Minister Marković expressed gratitude for the partnership, friendship and support to Montenegro in achieving its development vision and pointed to the good results achieved in economic policy in the past two years. He highlighted the success in implementing financial consolidation and stabilising public finances, reducing unemployment and pointed to economic growth at a rate of over 4.5%. “The plan is to attain a budget surplus by 2020 and to reduce the level of public debt,” the Prime Minister emphasised.

Both sides agreed that there is plenty of space for strengthening economic relations, especially in the areas of tourism and energy, in which Montenegro has exceptional development potentials. The role of Parliaments, as the strongest basis and pillar of the EU Member States, is enormous, because the Union is based on the representative democracy and the Rule of Law – it was concluded, among other things, at the meeting of the President of the Parliament of Montenegro Ivan Brajović with President Pavlopoulos. 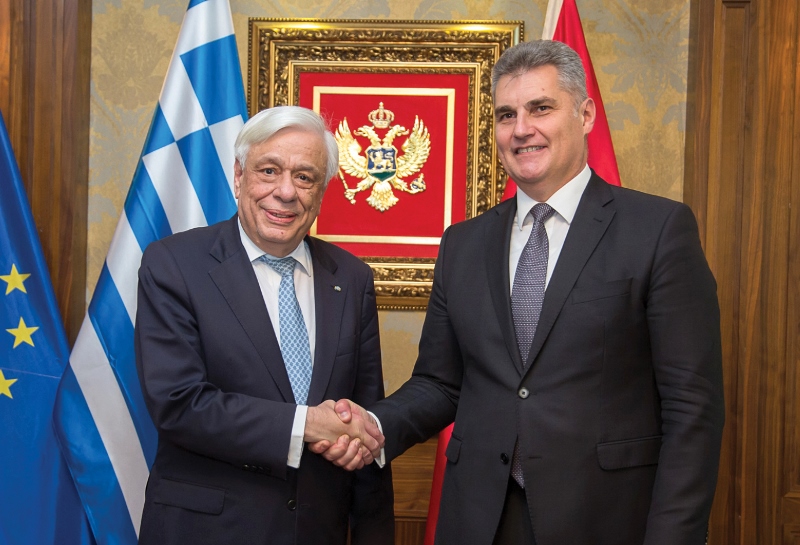 Parliament President Brajović pointed out that the Parliamentary dimension of strengthening stability and cooperation among countries in the region would be especially covered at the upcoming 16th Conference of Speakers of Parliaments of the Adriatic-Ionian Initiative which will be held in Budva, where Deputy Speaker of the Hellenic Parliament, Georgios Varemenos, will also participate.

The Greek Head of State emphasised that the international role of Montenegro was measured by the degree of its Europeanism and in line with consistent implementation of principles it shared with the community of European nations. The Parliament of Montenegro could significantly contribute to this, by cooperating with European Parliaments and by adopting European legislation.

Parliament President Brajović thanked Greece for its support so far on Montenegro’s Euro-Atlantic and European path and pointed out that excellent political relations should be enhanced with stronger cooperation in the field of economy.

Pictured above: President of the Hellenic Republic, Prokopis Pavlopoulos is welcomed to Podgorica by his Montenegrin counterpart, Milo Đukanović; with Prime Minister Duško Marković and the two Ministers of Foreign Affairs Srdjan Darmanović and George Katrougalos; with President of Montenegro’s Parliament Ivan Brajović.

Previous 84th TIF: a business platform for upgrading relations between India & Greece
Next Japan as a significant partner of the EU & Greece