State Visit of the President of Germany to Greece 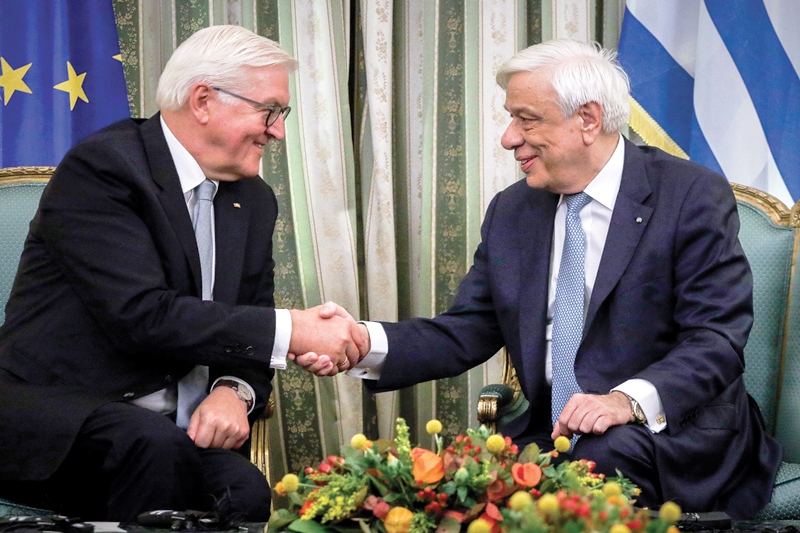 Federal President of Germany Frank-Walter Steinmeier and Mrs. Elke Büdenbender paid a State Visit to the Hellenic Republic from 10th-12th October 2018, during which time the German President praised the efforts of the Greek people to master the country’s financial crisis through tough austerity measures. “I have great respect for the Greeks,” he said.

President Pavlopoulos thanked President Steinmeier for his support in these difficult times. “You have done it not just to help Greece. You also did it for all of Europe,” the Greek Head of State said. He also said that he and President Steinmeier were in agreement that the democratic parties in Europe must, with European elections set for May 2019, make efforts “so that no entity emerges that wants bad things for Europe.”

At the start of his State Visit President Steinmeier visited the former German concentration camp of Chaidari, outside Athens, to remember the victims of German crimes in Greece during WWII. During the German occupation, upwards of 25,000 people were interned in the camp. He then laid a wreath at the Tomb of the Unknown Soldier before being welcomed with military honours by President Prokopis Pavlopoulos. Thereafter he had political talks inter alia with Prime Minister Alexis Tsipras and met with young people including some who are active in the cultural sphere. President Steinmeier gave a speech at a ceremony where he received an Honorary Doctorate from the Law Faculty of the University of Athens. 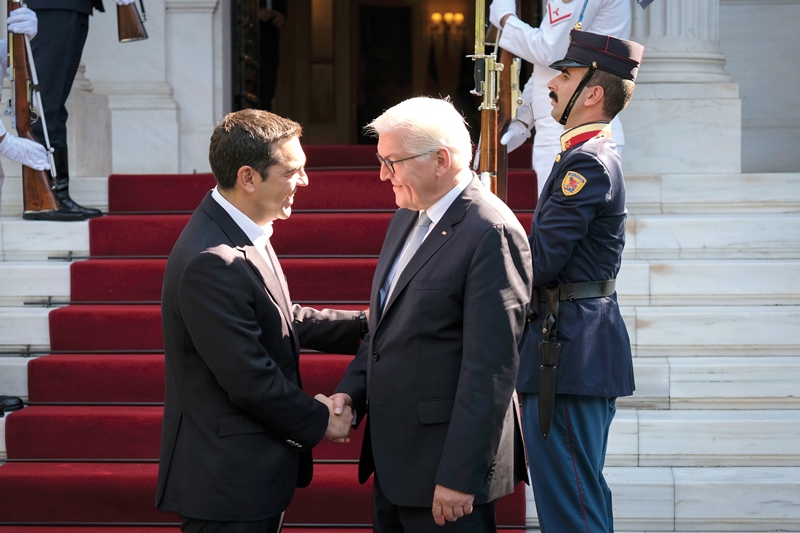 On the second day of the State Visit, the two Presidents then travelled to the city of Kalamata to mark the 74th Anniversary of the Liberation of Athens from German occupation, widely considered as the end of the Nazi occupation of Greece. There he visited the excavation site of Ancient Messini and met young start-up entrepreneurs for talks. Accompanying visiting President Frank-Walter Steinmeier on a trip to the archaeological site in the Peloponnese, President Pavlopoulos noted that it was a place where the three pillars of European culture – ancient Greece, ancient Rome and Christianity – coexisted side by side. “It is this culture, this Europe, that the two of us and our people are determined to defend in these especially critical times,” he said. Responding, President Steinmeier said he was impressed by the excavation taking place on the site and the theatre that had been discovered. 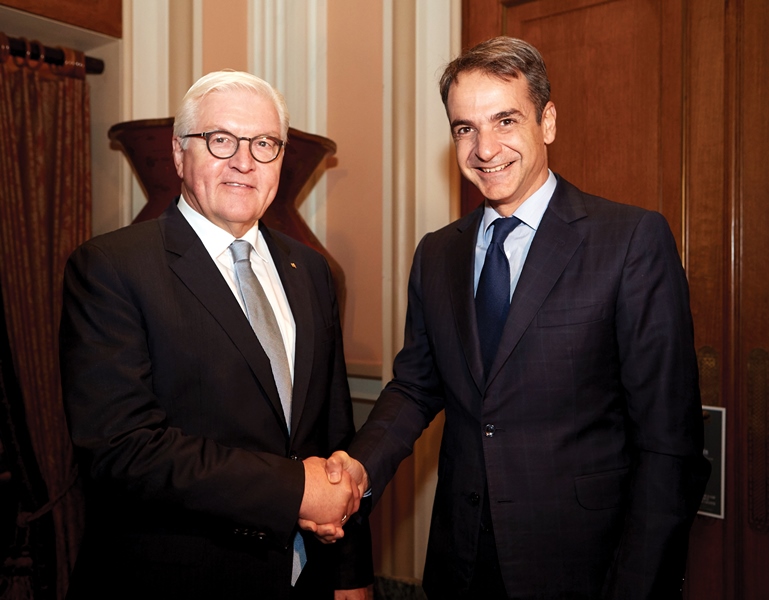 President Pavlopoulos in his meeting with his German counterpart underlined that both countries share the same vision for Europe. The Greek President referred to the major European priorities, the first of which is the refugee issue. He praised Berlin’s attitude to the matter, unlike that of some other EU partners. The second priority, he said, is defending the European social state. The third priority, according to President Pavlopoulos, is Greece’s national issues, which are simultaneously European issues. President Pavlopoulos referred to the Cyprus issue, the Greek-Turkish issue and relations with FYROM. He also reiterated that the completion of a revision of the Constitution by the neighbouring country is sine qua non before the issue can proceed. European countries will not compromise on its requirements in order for some countries to join the EU.

In his address, President Frank Walter Steinmeier expressed his condolences for the victims of the summer fires that wreaked havoc in the country. He then spoke of the common European interest in resolving the migration issue. Referring to the European elections, he said that only a few months remained before doubts and scepticism about a united Europe are eliminated. 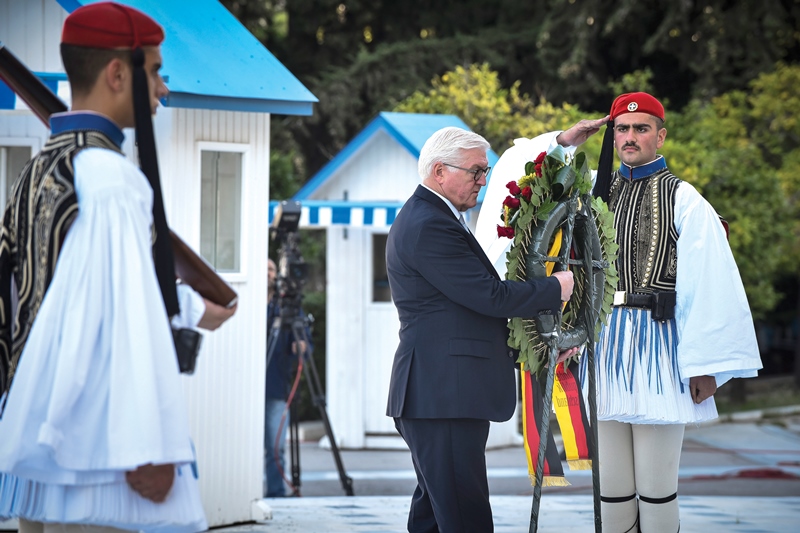 The Government and President Pavlopoulos also revisited the issue of German reparation and the return of the forced German occupation “loan” exacted by the Nazis, during German President Frank-Walter Steinmeier’s visit to Greece. The Greek President broached the issue directly. “Within the framework of resistance against those who, as you know, want to return to a nightmarish past [the extreme right], Greece incorporates its demands regarding the occupation loan and occupation-era reparations, which we have steadfastly viewed as legally in effect and judicially pursuable. We are not pursuing these claims unilaterally or arbitrarily. On the contrary, we view them within the framework of our common international and European legal culture. Hence, based on the rules of that culture, and of course in a competent judicial forum, each side can defend its positions,” he said, in a thinly veiled call for the two countries to agree to take the issue to the International Court of Justice in The Hague. At the same time, he said that the two EU partners should not ignore any differences arising from the distant past, which should “be resolved on the basis of International Law, which we all respect,” and work hard to limit extremist and populist voices in a shared European home. 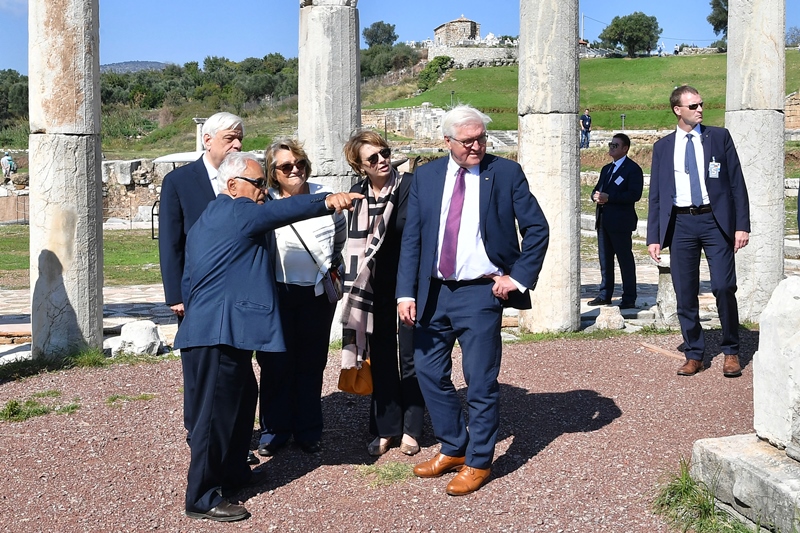 The visit of the German President was an opportunity for a new start in Greek-German relations, Prime Minister Alexis Tsipras said during their meeting at the Maximos Mansion. Premier Tsipras stressed the need to move on past the eight years of bailout memoranda and stereotypes on both sides which have poisoned the relations between Greece and Germany and look to a future of equal cooperation.

The course of the Greek economy, the refugee problem, the FYROM name issue, general geopolitical developments and the issue of pensions were among the issues discussed in a meeting between New Democracy leader Kyriakos Mitsotakis and President Frank Walter Steinmeier.

President Steinmeier given Honorary Doctorate by University of Athens 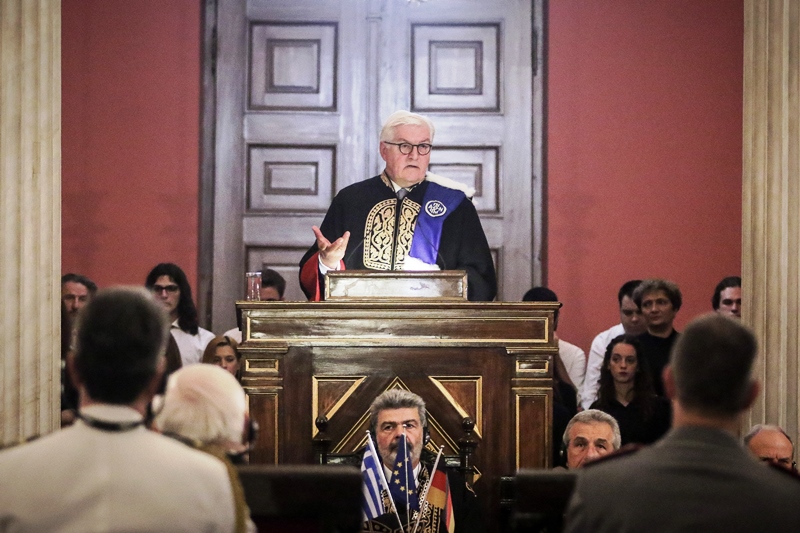 “The roots of academic education and the search for knowledge and truth were born here in Athens where the Academy was founded by Plato,” German President Frank-Walter Steinmeier said during a ceremony in which he was awarded an Honorary Doctorate by the National and Kapodistrian University of Athens.

“Our relations have not been easy in recent years. The crisis distorted the image of the Germans for Greece and the Greeks for Germany. In the meantime, this image has improved. We have come closer… All the Germans who are interested in politics and culture in Greece, and who have Europe in their heart, have followed the path of reforms with great interest,” he said. “We can only express our respect for the determination you show. This is a great achievement. It is an achievement primarily for your own country, but also for Europe as a whole. This should also be clearly recognised by Europe,” the German President said. In addition, he said that Germans do not forget their guilt for the things done by their ancestors. “We do not forget the special responsibility we have today and will have tomorrow from our history.”

Pictured above from left: Scene during the State Dinner held by President Prokopis Pavlopoulos in honour of his visiting German counterpart, Frank Walter Steinmeier; the two Heads of State in conference; President Steinmeier pictured with Prime Minister Alexis Tsipras; with New Democracy party President Kyriakos Mitsotakis; a solemn moment as President Steinmeier lays a wreath at the Tomb of the Unknown Solider in Constitution Square; German President Frank-Walter Steinmeier tours the archaeological site of Ancient Messini in the Peloponnese accompanied by President Prokopis Pavlopoulos; the German Head of State receives an Honorary Doctorate at the National and Kapodistrian University of Athens.