Her Excellency the President of Estonia, Kersti Kaljulaid, paid a State Visit to Greece from 16th-18th May and met with the President of the Hellenic Republic Prokopis Pavlopoulos, the Greek Prime Minister Alexis Tsipras, the Speaker of the Hellenic Parliament Nikos Voutsis and main opposition leader Kyriakos Mitsotakis. In addition, the Estonian Head of State visited the Border and Coast Guard Agency (Frontex) headquarters in the port of Piraeus and participated in the opening of an exhibition of cupolas of various churches of the Estonian Apostolic Orthodox Church at the Byzantine 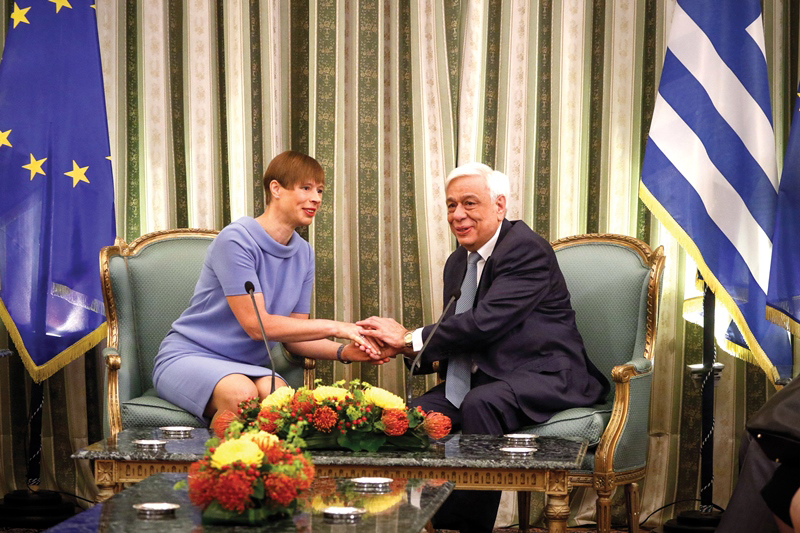 and Christian Museum in Athens.

This State Visit was the first by an Estonian President in almost 20 years. At her meeting with President Pavlopoulos, President Kaljulaid said that Estonia recognises and supports Greece’s efforts towards solving the European migrant crisis. She noted that Greece and Estonia share many common values and positions within the European Union, expressing her support for strengthening solidarity to address present-day challenges, both in the fiscal-financial sector and in the management of migration flows. The Estonian President further said that she supports EU enlargement, but only on terms that ensure the respect of European values by the candidate member-states.

Though Estonia and Greece are located in two different corners of Europe, as partners within the European Union, as well as NATO, both countries understand the importance of tackling issues in the realms of security, as well as migration, together, President Kaljulaid said. “Greece has been at the forefront of illegal immigration in the eastern region of the Mediterranean and Estonia has contributed by participating in the activity of the European border and coast guard, as well as by receiving individuals who need international protection,” she added. 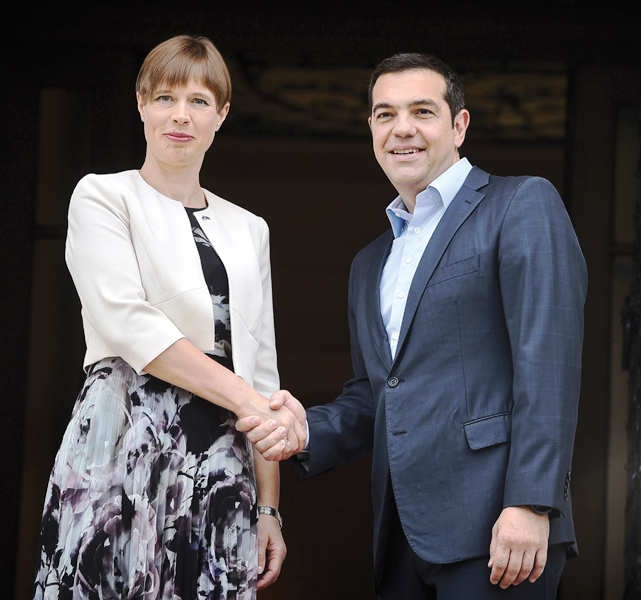 Pointing to the difficult task faced by Greece in the management of the refugee and migration crisis, President Kaljulaid said she was in favour of achieving the goals of EU asylum policy and underlined the importance of this plan because, as she said, nobody knows where the next crisis will strike.

She also referred to Estonia’s contribution to the activities of the EU border agency Frontex and expressed her country’s intention to continue cooperating with Greece in this direction, while pointing to the strong interest shown by many Estonians for investments in Greece.

On his part, President Pavlopoulos sent clear messages to FYROM and Turkey, as well as calling for the resolution of the Cyprus issue, during his meeting with the visiting President of Estonia at the Presidential Mansion. Greece supports the prospect of FYROM’s accession to the European Union and NATO, but this is conditional on reaching an agreement for the resolution of the name issue with the neighbouring country that accords with history, international law and the European acquis, he said.

On relations with Turkey, President Pavlopoulos reiterated that Greece seeks relations of friendship and good neighbourhood and supports Turkey’s European perspective. “However, on Turkey’s part, this demands that it show real respect for the European acquis and international law as a whole. This means that the provisions of the Lausanne Treaty and Paris Treaty, which are crystal clear and leave no room to claim the existence of grey zones, should be fully respected by everyone. Especially, when to question them means questioning not only the borders of Greece, but also of the European Union,” he said. 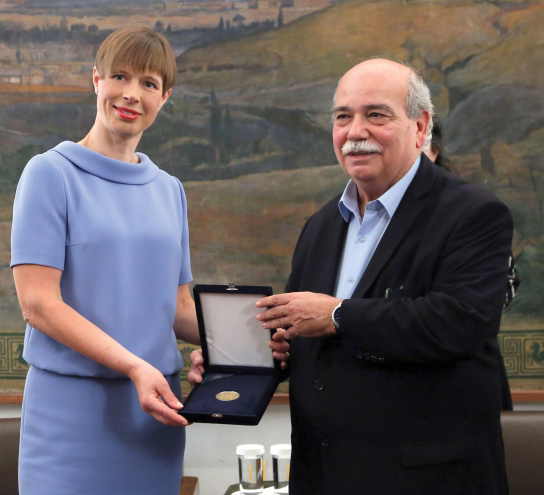 On Cyprus, he reiterated that it is a European and international matter, noting that Greece seeks a fair and viable solution as soon as possible. He clarified that it would be inconceivable for the Republic of Cyprus, which is a full member of the European Union, to agree to limitations on its sovereignty – as would result from the presence of occupation troops and anachronistic third-party guarantees. Prime Minister Alexis Tsipras praised Estonia as an example for the whole of Europe for the manner in which it has exploited digital technology, after his meeting with the visiting President of Estonia at the Maximos Mansion. The Premier further commented: “Estonia is a country that has made notable use of digital technology to develop its economy and is today an example for all of Europe.”

The foundations for closer cooperation between the Greek and Estonian Parliaments were presented at their meeting by the President of the Hellenic Parliament Nikos Voutsis and President Kaljulaid.

The House Speaker referred to Estonia’s significant steps in the field of e-government by saying that “we are following this course and there is very close cooperation between the two countries, as well as the Greek State and the Greek Parliament… This is a crucial area in which new technology gives us great potential and there is a very wide field of common interest,” Mr. Voutsis stressed. 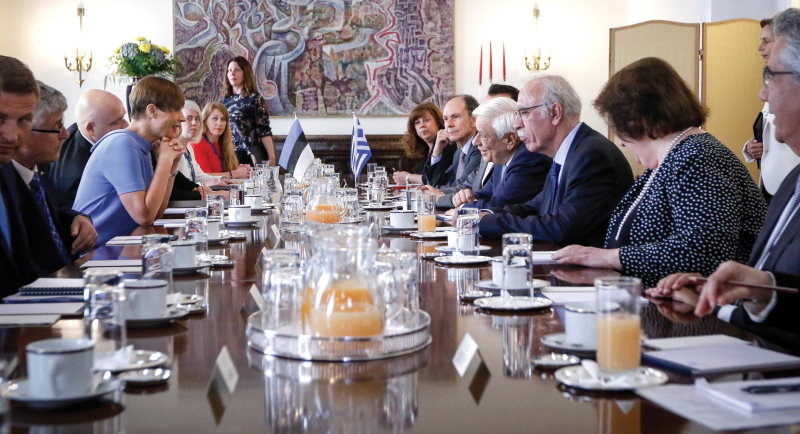 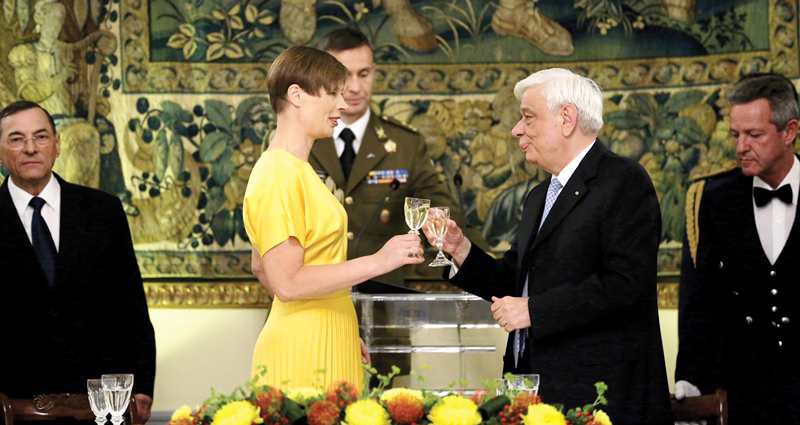 The President of the Republic of Estonia, for her part, referred to the existing cooperation between the two Parliaments, stressing that “we can exchange views so that we can proceed with solidarity, to build the future” and pointed out that “we admire your work, with which you are trying to overcome the economic crisis, you have already overcome it and progress is being made.” President Kaljulaid expressed her country’s availability to contribute through their expertise in digital knowledge. “What is certain is that we are contributing to the export of services from your country, with

tens of thousands of Estonian tourists choosing Greece because it is their favourite destination.” 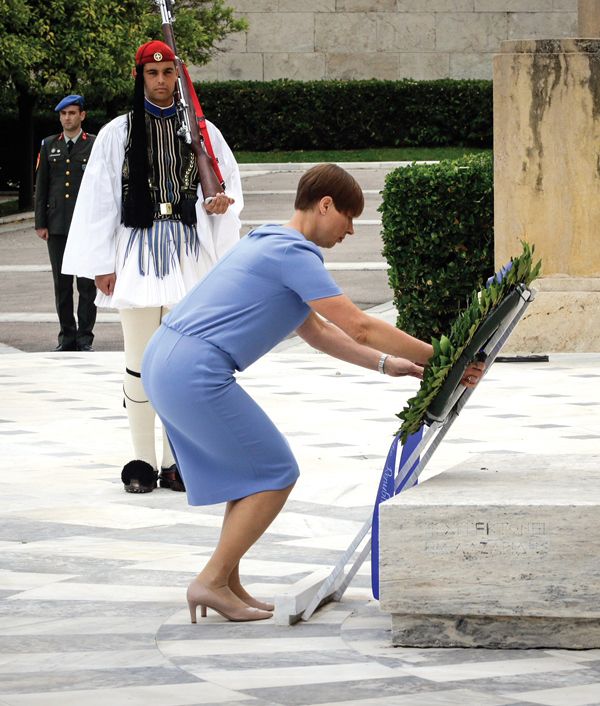 The President of the House of Representatives bestowed on President Kaljulaid the Gold Medal of the Hellenic Parliament accompanied by an honorary papyrus.

The Second Vice-President of the House of Representatives George Varemenos, the Bureau of the Parliamentary Group of Friendship of Greece-Estonia (President George Papafilippou, Vice-President Panos Skoraliakos, Secretary Hara Cefalidou) and the Member of the Parliamentary Friendship Group Dimitrios Gakis, the Secretary General of the House Kostas Athanasiou, the Diplomatic Advisor of the House Ambassador Spyros Theoharopoulos and the Ambassador of Greece to Estonia Maria Karnoutsou were also present on the Greek side. 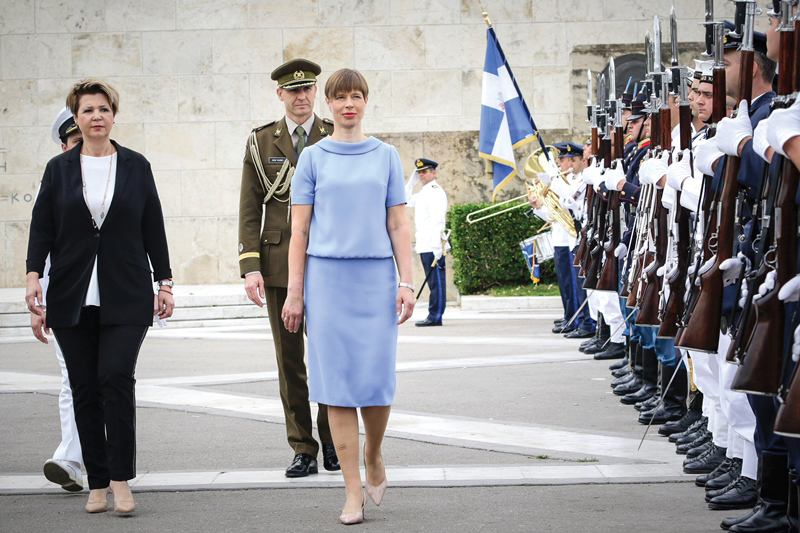 Pictured from above: President of the Hellenic Republic Prokopis Pavlopoulos welcomes his visiting Estonian counterpart Kersti Kaljulaid; the two Presidents in discussion at the Presidential Mansion; President Kaljulaid meets with Prime Minister Alexis Tsipras; is bestowed the Gold Medal of the Hellenic Parliament by its Speaker Nikos Voutsis; the two delegations in conference; the two Heads of State toast to relations between the two countries at the State Dinner; President Kersti Kaljulaid pays her respects by laying a wreath at the Tomb of the Unknown Soldier accompanied by Minister of Administration Olga Gerovasilli.

Previous Greece and the UK will continue to enhance relations and build up their great friendship
Next A joyous celebration: the Philippine Independence Day Reception