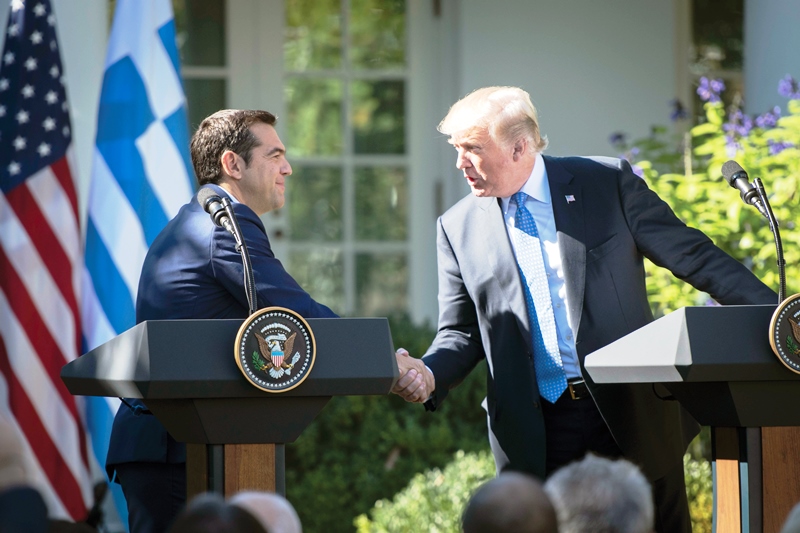 America highlights Greece’s strategic importance as a beacon of stability

During his five day visit in the United States of America, from October 14th to October 18th, Prime Minister Alexis Tsipras met in Washington with US President Donald Trump to discuss a wide range of bilateral and regional issues. The US President’s invitation confirms the upgraded role of Greece at geopolitical level, as well as the positive climate in Greece’s economy. The two leaders also discussed the sectors of economy, investment, energy, security and defence. Premier Tsipras also met with US Vice-President Mike Pence, with other top US officials, the IMF Managing Director Christine Lagarde, as well as with investors and representatives of Greek expatriate organisations. 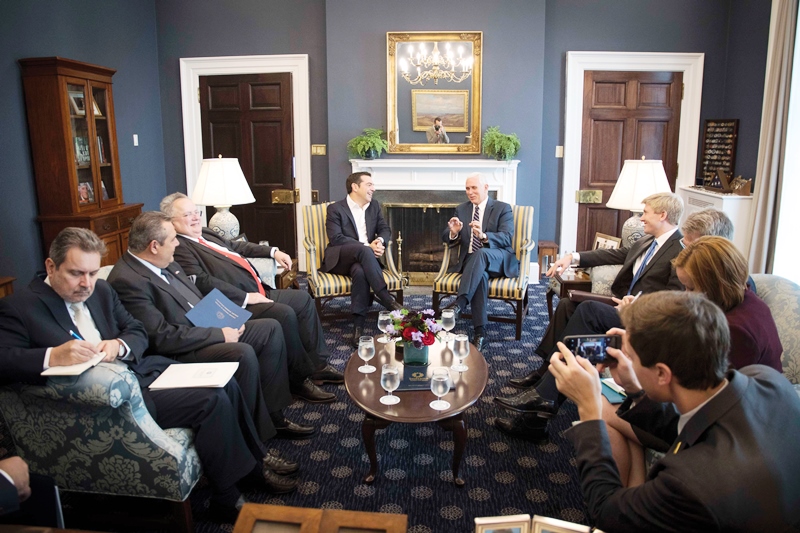 President Trump said that his country supports “responsible debt relief” for Greece to assist in its economic recovery during a joint press conference with Prime Minister Tsipras in the White House Rose Garden.

The US Head of State said that talks centred on defence, energy, commerce and trade and expressed support for reforms and investments. “We’re also making great strides in our economic cooperation. The American people stand with the Greek people as they recover from the economic crisis that has recently afflicted their nation,” he told members of the press. “I’ve encouraged the Prime Minister in his continued implementation of reforms and I have totally reaffirmed our support for a responsible debt relief plan. A strong and flourishing Greece provides immense opportunity for American trade, investment and job creation.”

The President hailed Premier Tsipras’ efforts to turn Greece around noting that Americans are standing next to Greeks as they recover from the crisis. He referred to the “long and durable” bilateral relations, adding that the US and Greece has a joint commitment to freedom.

Commenting on their bilateral talks, he said that Greece has expressed interest in upgrading its fleet of F-16 military jets. “My administration has also informed Congress of a potential sale to Greece to upgrade its F-16 aircraft. This agreement to strengthen the Hellenic Air Force is worth up to 2.4 billion dollars and will generate thousands of American jobs,” he said. 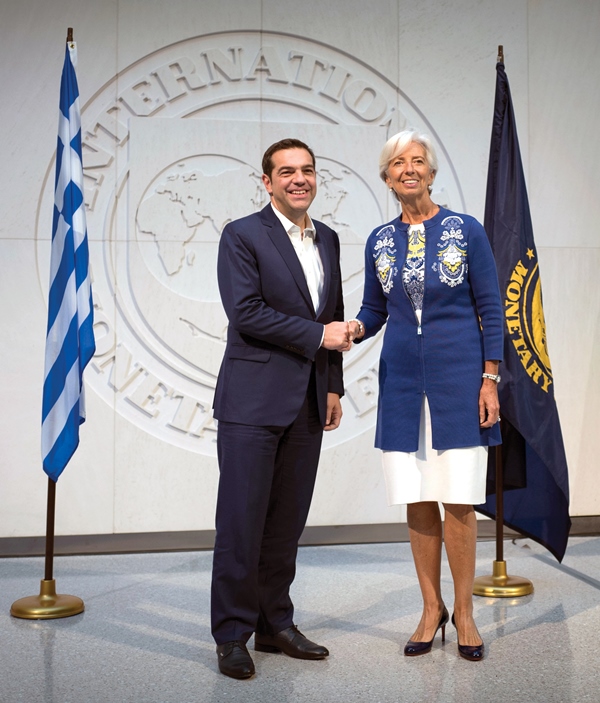 On energy, the President said he appreciates Greek contributions to European energy security through its support of the Trans-Adriatic Pipeline (TAP), the Greece-Bulgaria Inter connector (GBI) and the liquefied natural gas facilities that are capable of transporting diverse sources of energy to Europe, including potential liquefied natural gas exports from the United States. “These initiatives make both our people safer and create jobs,” he noted.

Greek-American relations are at their best, possibly since the Second World War, Prime Minister Tsipras said in turn at the joint press conference, noting that they are based on mutual respect and are fuelled by US support in helping Greece exit the crisis.  He said bilateral cooperation is today more important than ever and Athens is looking forward to attracting significant US investments. “I want to assure you that the meeting was very productive, I never felt intimidated. On the contrary I felt there is a fruitful perspective in order to overcome any differences that may exist and to see the common ground that is very important for the relations of our two peoples that are traditional and historical and for our common goals,” he said, responding to a journalist’s question. 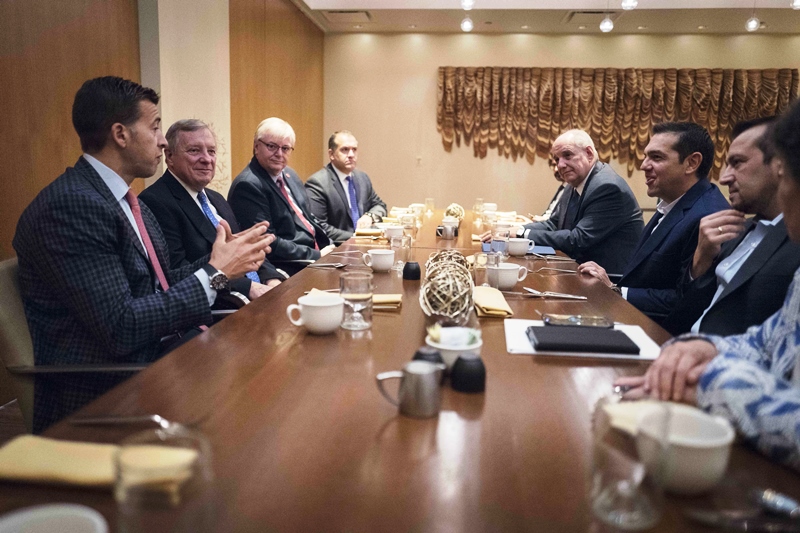 Commenting on Greece’s foreign relations, Premier Tsipras urged Turkey to stop its provocations in the Aegean adding that the country supports a just and sustainable solution for Cyprus. He said the US can help relieve Greece of its national concerns. Asked about whether he believed Turkey should remain in NATO, he reiterated Greece’s position that it supports both Turkey’s NATO membership and its EU course, noting however that the neighbouring country must respect International Law and treaties. “Greece is following a new dogma of a multi-dimensional foreign policy, with its main objective to upgrade Greece’s role as a country that is a pillar of stability and security in an unstable region,” he said. 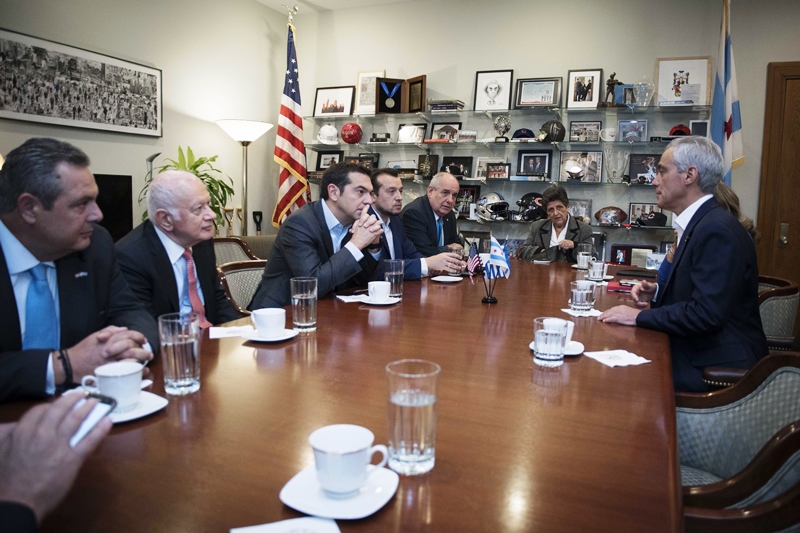 Prime Minister Tsipras first visited Chicago where he met with Greek-American and American business representatives, investors, Greek expatriate associations and American officials. “We are strengthening our geostrategic position as a pillar of stability, security and cooperation in our region”, he said. Premier Tsipras sent an optimistic message that the Greek economy is turning a corner at a meeting with Greek American business leaders. “The Greek comeback is upon us,” he said during the two-hour meeting.

The Greek Premier said that the country is leaving behind not only the economic crisis, but also the development model that led Greece into debt and bailouts. He further underlined some factors that have adversely affected investments in the past, citing gigantic bureaucracy and the confusing and often contradictory laws.

Premier Tsipras assured his audience of his own and his Government’s absolute commitment to foreign investors and added that changes in the legal framework would make investment easier. He also underlined that US support was crucial for Greece, as it helped the latter to cope with the crisis and is still needed to overcome the crisis once and for all.

According to reports, most of the Greek-American business representatives expressed their readiness to strengthen their relations with Greece. They asked that communication and exchange of information between the Government in Athens and the US business community should be improved. 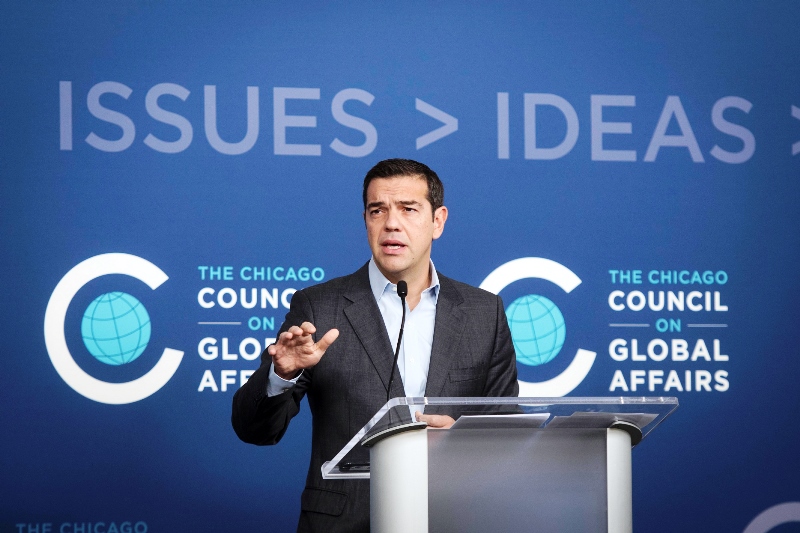 During his meetings with Greek expatriates, Premier Tsipras said that he was proud to be the first Greek Prime Minister to visit Chicago and stressed that the support from Greeks abroad is crucial for attracting investments in Greece. Whilst in Chicago, he addressed the Council on Global Affairs, visited 1871 – a centre for technology and entrepreneurship based in Chicago, and met with the Mayor of Chicago, Rahm Emmanuel, and Senator Dick Durbin.

Pictured above: President Donald Trump and Prime Minister Alexis Tsipras hold a joint press conference in the White House Rose Garden; the Greek delegation, comprised of top Members of the Cabinet, pictured in conference with US Vice President Mike Pence; and President Donald Trump; Premier Tsipras meets with the IMF Managing Director, Christine Lagarde, in which she stated: “The IMF recently approved in principle a new arrangement to support Greece’s policy programme. Resolute implementation of this programme, together with an agreement with Greece’s European partners on debt relief, are essential to support Greece’s return to sustainable growth and a successful exit from official financing next year.”; Left: Greek Prime Minister Alexis Tsipras and his delegation meets with Senator Dick Durbin; and with Chicago Mayor Rahm Emanuel.

(Photographs by A.Bonetti/Office to the Prime Minister.)