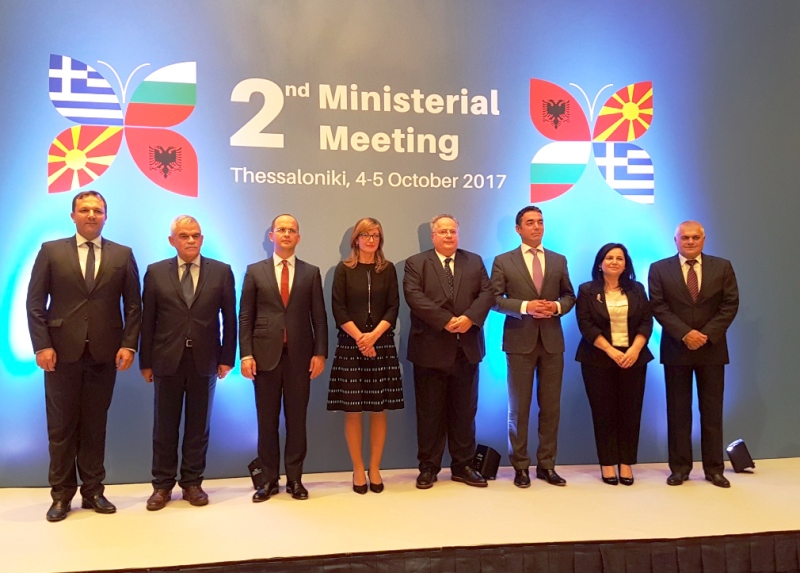 The Second Ministerial Meeting between Greece, Albania, Bulgaria and the former Yugoslav Republic of Macedonia took place in Thessaloniki on October 4th-5th, with the participation of the Ministers of Foreign Affairs and Interior of the four states, as well as officials from the countries’ Energy Ministries. The meeting was part of a broader strategy of Greek diplomacy for strengthening regional stability and cross-border cooperation with the bordering states of the southern Balkans and it is a follow-up to the quadrilateral Ministerial Meeting of 2016. 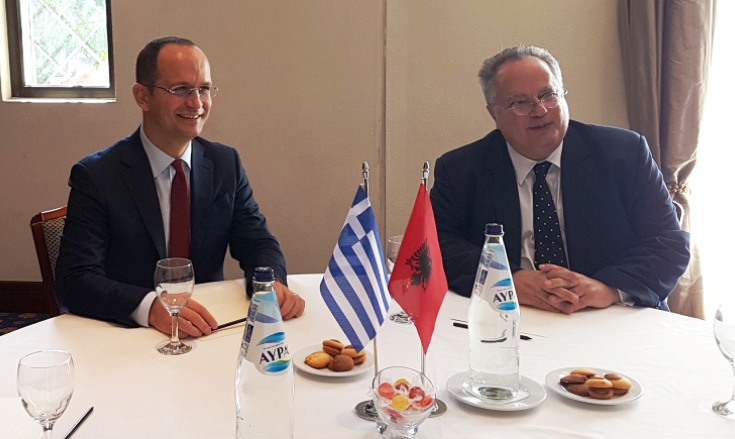 The Greek side was represented by Minister of Foreign Affairs Nikos Kotzias, who chaired the proceedings, Alternate Civil Protection Minister Nikos Toskas, and, from the Environment and Energy Ministry, Secretary General Michalis Verriopoulos.

At the initiative of Foreign Minister Nikos Kotzias, Greece’s aim is to promote sincere and open dialogue among the South Balkan countries. Within this framework, the agenda of talks was expanded to enhance cross-border cooperation on a range of issues, such as security and energy. 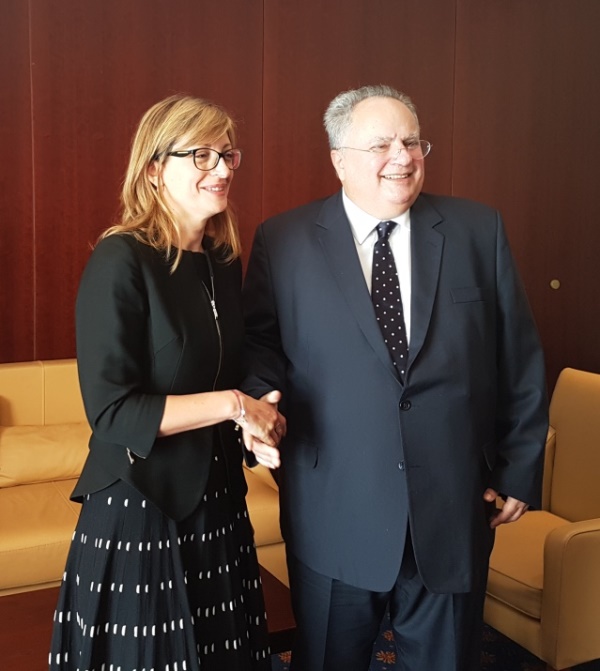 This initiative of Greek diplomacy is part of a wider strategy to strengthen regional stability in the Balkans and, by extension, in the greater Southeast Mediterranean, and part of a series of similar regional cooperation initiatives promoted by the Greek side over the last years that have brought about significant results.

“This formalised collaboration between the four countries of Southeastern Europe, of the South, as I like to call them, is one of 15 international collaborations that Greek diplomacy has undertaken during the last three years. This is a meeting which aims to contribute to the stability and development of the region. In our region it is one of the two collaborations of this kind: one comprises the four member-states of the EU: Greece, Croatia, Romania and Bulgaria, and the second is the one we’ve had over the last two days,” Minister Kotzias noted at the press conference.

The meeting’s agenda was to establish institutionalised cooperation between the states of the region on challenging issues of strategic importance, such as the tackling of extremism, terrorism, and radicalisation, fighting organised crime and the consequences of the migration crisis, which are still actively affecting all Balkan states to a greater or lesser degree.

Participants also examined the options of further cooperation on issues such as fire-fighting, including inter-country assistance, and of promoting collaboration in the energy sector, particularly in strengthening energy security and interconnectivity energy networks.

They agreed that the next meeting’s main topic will be upon issues concerning the cohesion funds, which are, of course, connected to the new EU budget, which, in turn, is related to Brexit. It is through this mechanism that the redistribution of funds amongst member-states of the EU and candidate countries will happen. And it is the common interest not to see a limitation of funds for South Europe.

They also have agreed that the future of the European Union would stay high on the agenda and how small or medium size countries, such as the participant ones, envision this future.

What the four states chiefly wanted to achieve through these meetings was to agree, to identify and to evaluate what brings them together and the future of the region. And mainly, what Greek Foreign Policy is today aiming for, that is, the resolution of problems and the promotion of a positive agenda. Ways to develop common synergies further, both in the economic and cultural sector, but also in the fields of education and research and on energy and internal security. They agreed upon a range of measures during the most productive plenary meetings and bilateral meetings.

Bilaterally, they discussed how to deepen their collaboration and adopt measures that would benefit society.

The Ministers of the Interior did the same. They agreed to arrange a meeting of the Heads of the Police Authorities of the four countries in Thessaloniki. Also, a meeting of the Heads of the four Fire Services in Ptolemaida, where, following Alternate Minister Toskas’ efforts, the School of Non-Commissioned Officers of the Hellenic Fire Service was established. Situated quite close to the northern borders of Greece, it is an institution where firemen will be receiving training, since not all countries of the region have established mid or higher level Fire Service institutions. This emerged during this summer’s devastating fires.

They also agreed to an exchange of operational information that can help combat organised crime, particularly drug trafficking and other forms of organised crime and illegal activities. In addition, as regards citizen protection, it was agreed to hold a large scale exercise in Ptolemaida. 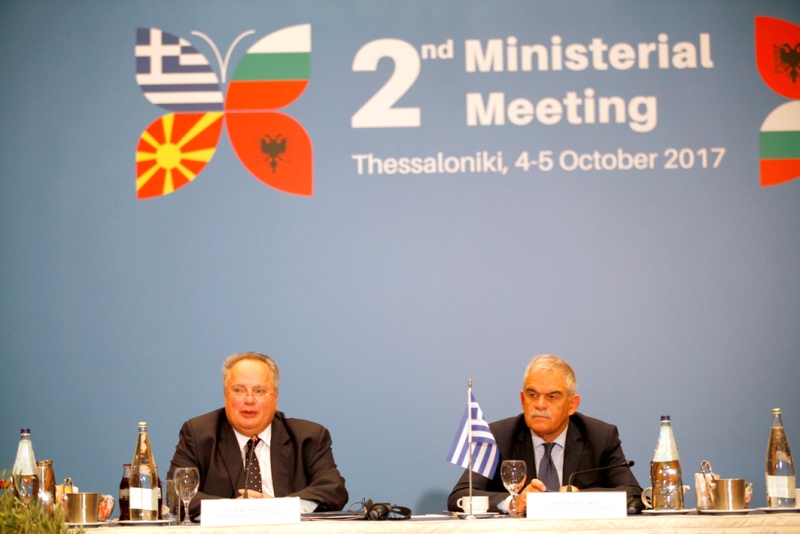 The Schengen membership for Bulgaria and Romania was also mentioned. The Greek Foreign Minister answered a question by the media saying that not only do we stand in solidarity and are supportive to these countries, but also, because the expansion of the area of internal EU security will, at the same time, facilitate our own security.

There was also a very interesting debate on issues of collaboration on energy. The new energy pipelines, either for natural gas or electricity or oil, go through southeastern Europe. Greece provides for the connection of the Balkan countries to the LNG pipelines and of other forms of energy that will be crossing Greece.

The need to exploit renewable energy resources and other forms of energy, particularly wind power, solar power, was extensively covered during their talks. In this field, Greece, compared to the other three, holds a comparative advantage, particularly as regards the know-how of transforming these natural phenomena into energy. They also discussed the necessary reforms that have to be undertaken so as to transport this energy in the most effective and economic way.

“The Ministerial Meeting of Greece, Albania, Bulgaria and FYROM is beneficial for all of us because we can discuss our thoughts about the future with great openness, as well as the issues we must resolve, while it is also an element of Greece’s general policy for building important collaborations across the region,” Foreign Minister Nikos Kotzias said. 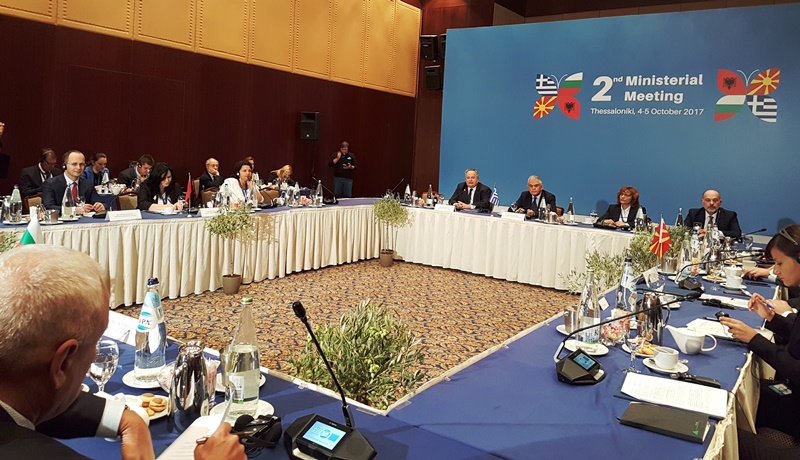