State Visit of the President of Bulgaria to Greece 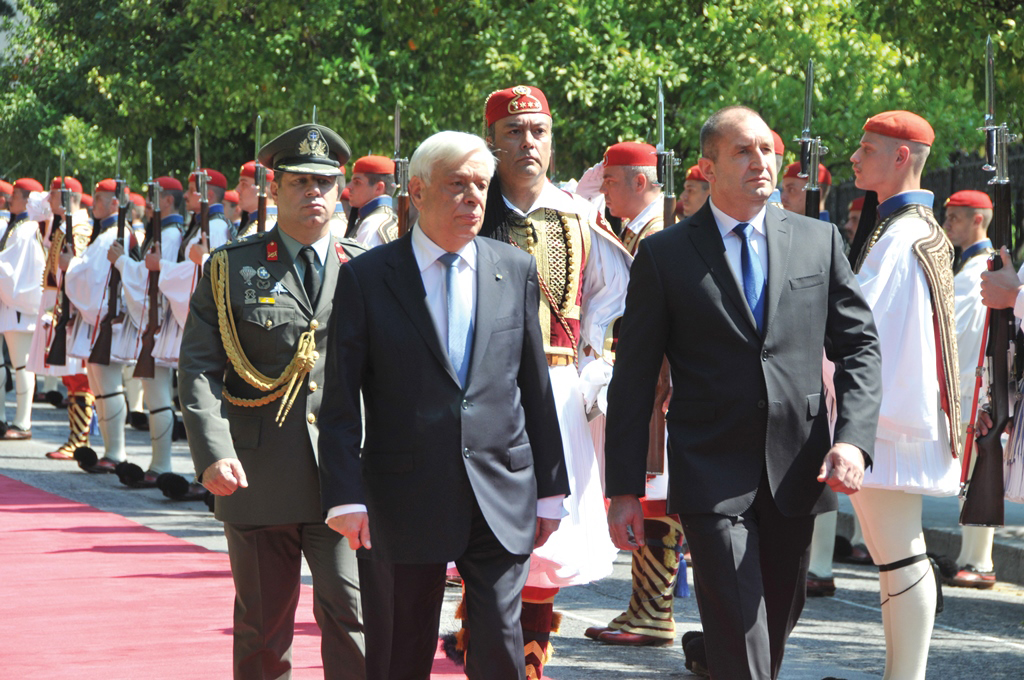 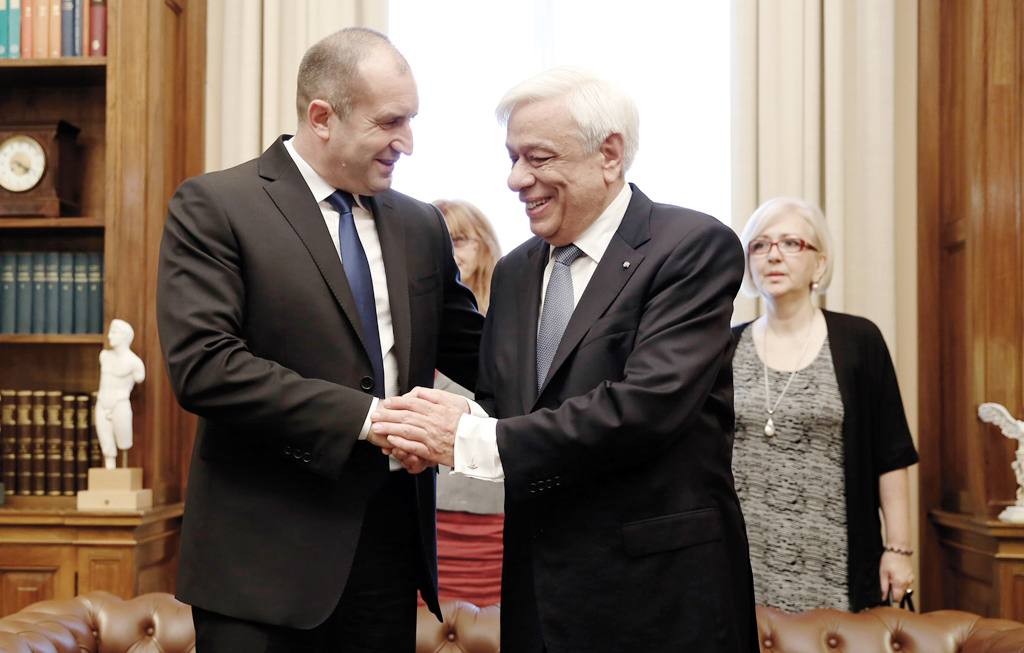 “Bulgaria and Greece are connected by a strategic partnership, both in terms of bilateral relations and within the EU and NATO. The two countries are an example of good-neighbourly relations in the Balkans, based on common European values.” This is what the President of the Republic of Bulgaria, Rumen Radev, said whilst he was on a State Visit in the Hellenic Republic at the invitation of his Greek counterpart, Prokopis Pavlopoulos.

“Greece’s support to Bulgaria’s accession to Schengen is also of prime importance, as this is the only way to guarantee the effectiveness of our fight against human trafficking and terrorism. And it is time for the rest of the EU member states to understand it,” President Radev added.

On his part, President Pavlopoulos underlined that Bulgaria has fulfilled all its obligations and met the criteria and therefore, according to Athens’ point of view, it would be better for the EU to conclude this accession process.

Bilateral trade between Bulgaria and Greece reached 3 billion euros in 2016 and the two countries will continue to encourage contacts between the business circles President Radev emphasised. The development of the energy and transport connections is of considerable importance for boosting trade and tourism the Bulgarian Head of State further said, calling for finishing the construction of the infrastructure of the current border check-points and building new ones. 1,100,000 Greek citizens visited Bulgaria in 2016 and 1,200,000 Bulgarians chose to spend their holidays in Greece.

“These are real indicators of the good relations between the two countries. Millions of the two countries citizens travel freely, rest, work and study in the territories of their neighbour,” President Radev emphasised.

During his visit in Athens, the Bulgarian Head of State voiced his position that the construction of a gas inter-connector, connecting the gas transmission networks of Greece and Bulgaria, is of paramount importance, not only for Bulgaria, but also for the region. He called for implementing this project on schedule, which will allow Central and East-European countries to diversify the gas supply sources and routes.

President Pavlopoulos highlighted the importance of the fact that the Bulgarian Head of State’s first visit abroad is namely to Greece.

During their talks, both Presidents also highlighted the two countries’ efforts to cope with illegal migration, to fight terrorism and to strengthen cooperation between the two countries armed forces as a key factor guaranteeing stability in the region.

The two Presidents were unanimous in their opinion that Bulgaria and Greece will continue to work together to serve the interest of a stronger and more stable European Union, because this is the future of Europe. The two shared the opinion that the two countries will continue to support the European integration process of their Western Balkan neighbours. Referring to the European perspective of the Balkan countries, the Greek President stressed: “We are in favour of the integration of our neighbours in NATO and the EU. We are in favour of the European perspective of our neighbours in the Balkans, but this prospect has certain prerequisites that nobody can ignore.”

In particular, he said: Firstly, to respect International Law. Secondly, respect to the European acquis. And fully respect the history and European culture. “As for the Balkan countries’ European prospects, we share the same opinion; they must meet the membership criteria and what is considerably important for the Balkans – good-neighbourly relations and mutual respect for history – should be an obligatory condition for starting the membership negotiations,” President Radev added. 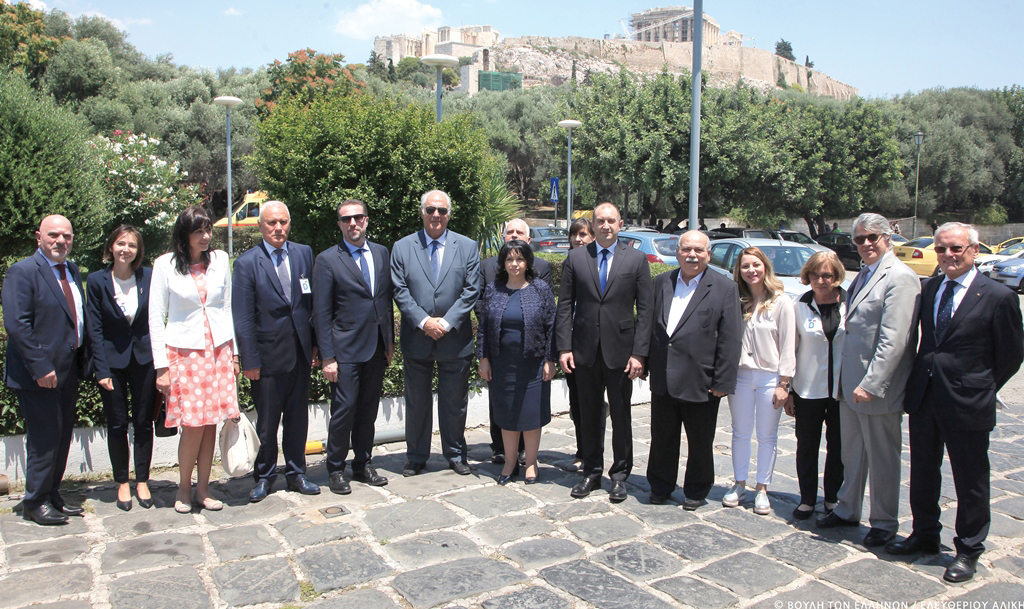 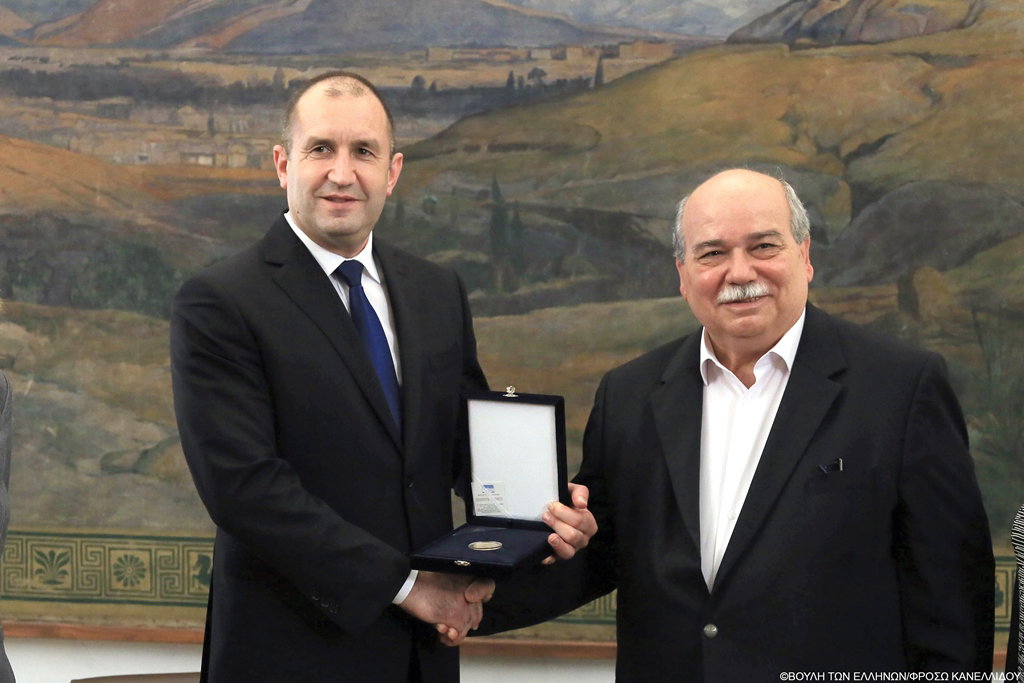 President Radev also met with main opposition New Democracy leader Kyriakos Mitsotakis, Hellenic Parliament Speaker Nikos Voutsis, as well as with Athens Mayor George Kaminis. The Bulgarian President upon his arrival laid a wreath at the Tomb of the Unknown Soldier at Syntagma Square, before inspecting a Guard of Honour at a welcome ceremony outside the Presidential Palace. Accompanied by his entourage, he later attended an official dinner hosted by President Pavlopoulos and visited the Acropolis Hill. 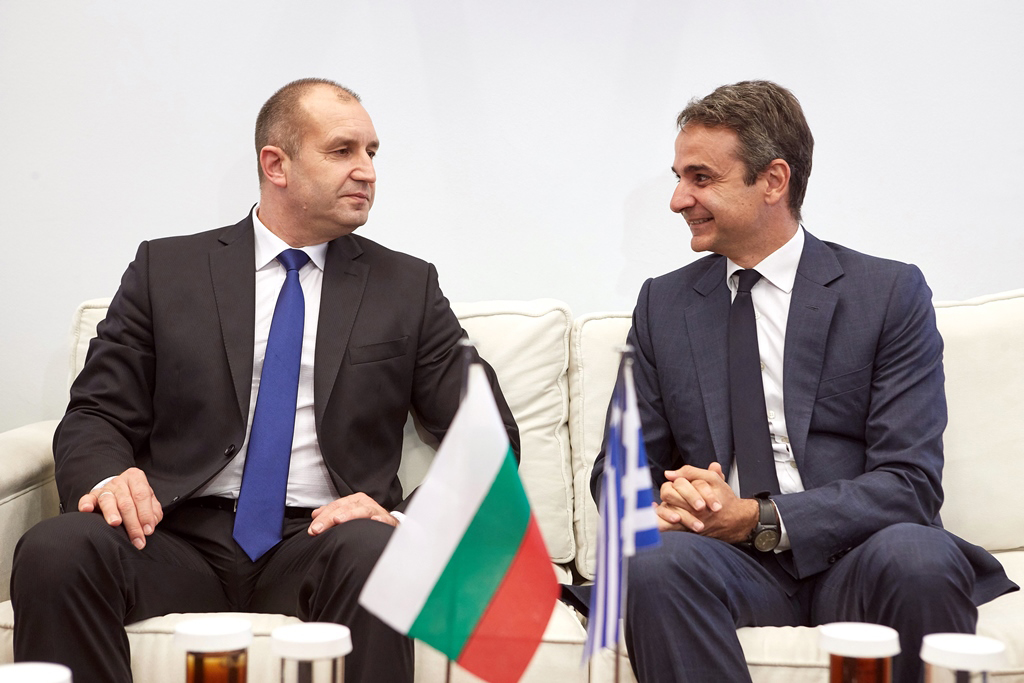 New Democracy leader Kyriakos Mitsotakis underlined the importance of the very good relations between Greece and Bulgaria during his meeting with the visiting Head of State. “Greece and Bulgaria are two countries that traditionally have very good relations. It would not be an exaggeration to say that the axis of the two countries relations constitute a factor of stability in a troubled region”. The main opposition leader also noted that “Despite the crisis, Greece remains the third highest investor in Bulgaria” adding that “there is ground for further improvement”.

The important role of Balkan stability and security in the region and the need to jointly address serious challenges was confirmed during the meeting that the Speaker of the Hellenic Parliament Nikos Voutsis had with President Radev. In the toast, during the luncheon which was hosted in honor of the Bulgarian Head of State, the Greek Speaker praised the level of relations between the two countries and peoples, stressing that Greece and Bulgaria can play a leading role both in the Balkans and in the EU, whilst reiterating the need to cooperate for stability, peace and development in very critical area, in which the two countries are located. The Speaker also presented President Radev the Gold Medal of the Hellenic Parliament bearing the embossed figure of the bust of Pericles. 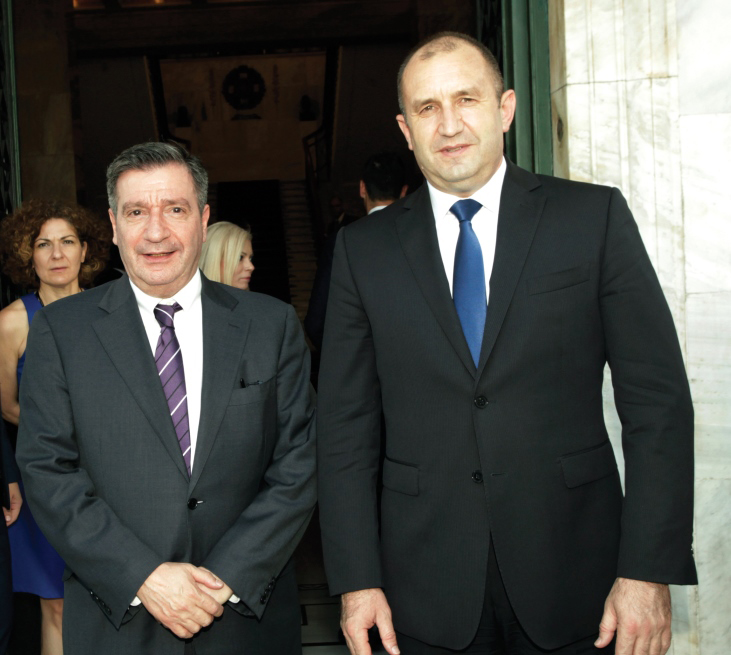 On his part, the President of the Republic of Bulgaria stressed that Greek-Bulgarian relations are developed in such a direction to provide the opportunity to the citizens of both countries to live and create in peace and harmony despite the conditions which exist, such as tensions in the region. He was accompanied by Energy Minister of Bulgaria Mrs. Temenuzhka Petkova, Deputy Foreign Minister Emilia Kraleva and a 20-member delegation.

During his visit to the City Hall of Athens, the Bulgarian Head of State was greeted by Mayor George Kaminis before they discussed major issues of the region, the refugee crisis and cooperation between the cities against the current challenges. President Radev expressed interest in the role played by the municipality of Athens in the management of major issues and agreed upon the need for cooperation and exchange of expertise and experiences between the Greek capital and Sofia. The Mayor then presented President Radev with the Medal of the City of Athens. 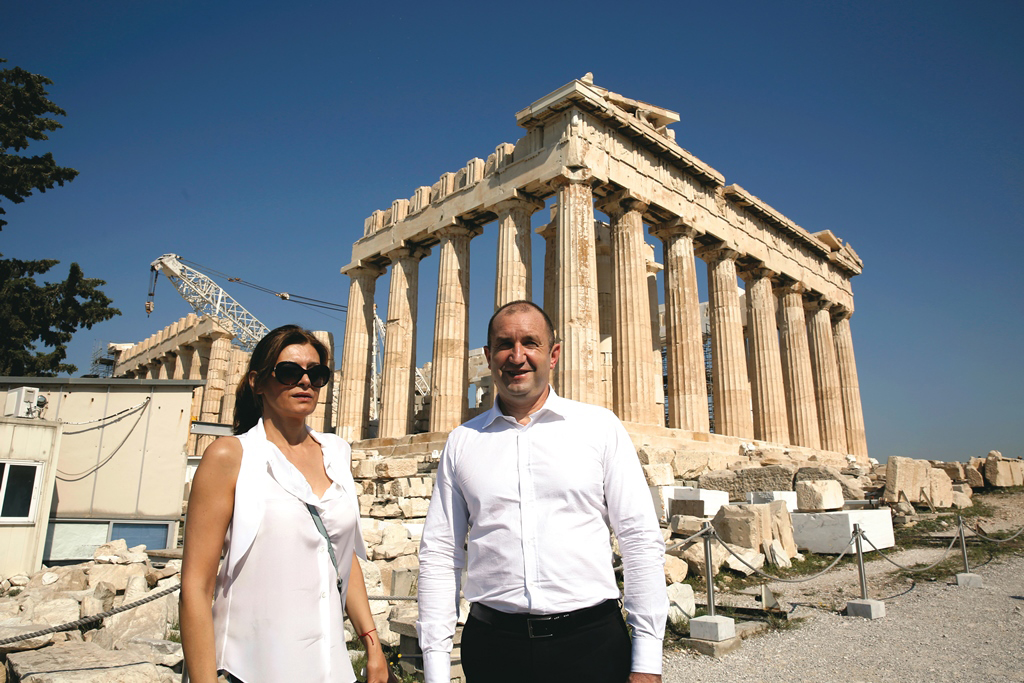 Previous Interview with H.E. the Ambassador of the Republic of Kazakhstan, Alexei Volkov
Next Jellyfish surge in Mediterranean threatens environment – and tourists