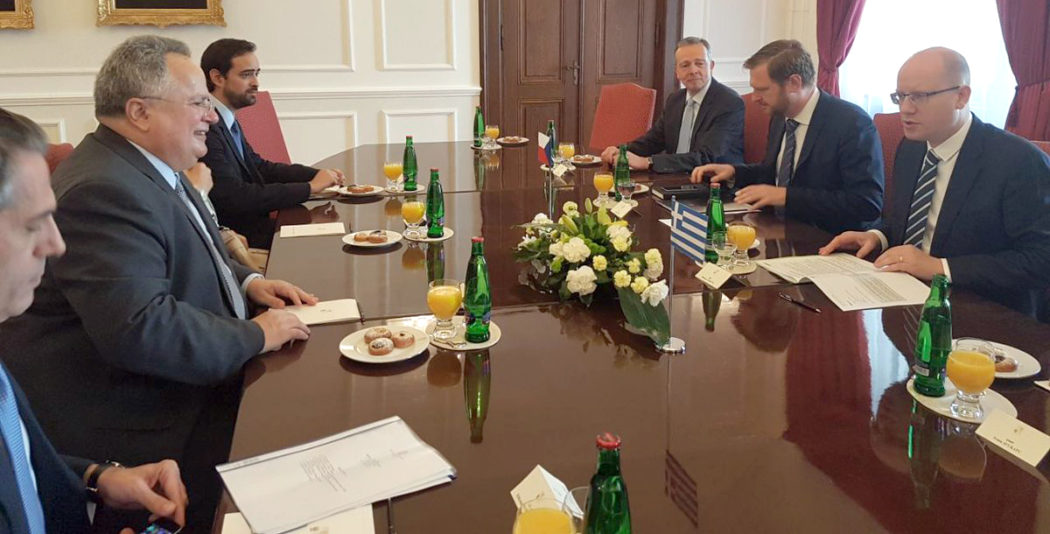 We must prevent Europe’s fragmentation; render it, once again, attractive to its citizens

Greek Foreign Minister’s Nikos Kotzias’ visit to Prague, on May 16th, took place at a special juncture for Europe where relations between Greece and the Czech Republic have prospects for improvement. The aim of the visit was to give new momentum to the development of bilateral cooperation. The talks with the Czech side also focused on issues of regional and European interest, including migration, the situation in the Western Balkans and post-Brexit developments in the EU. 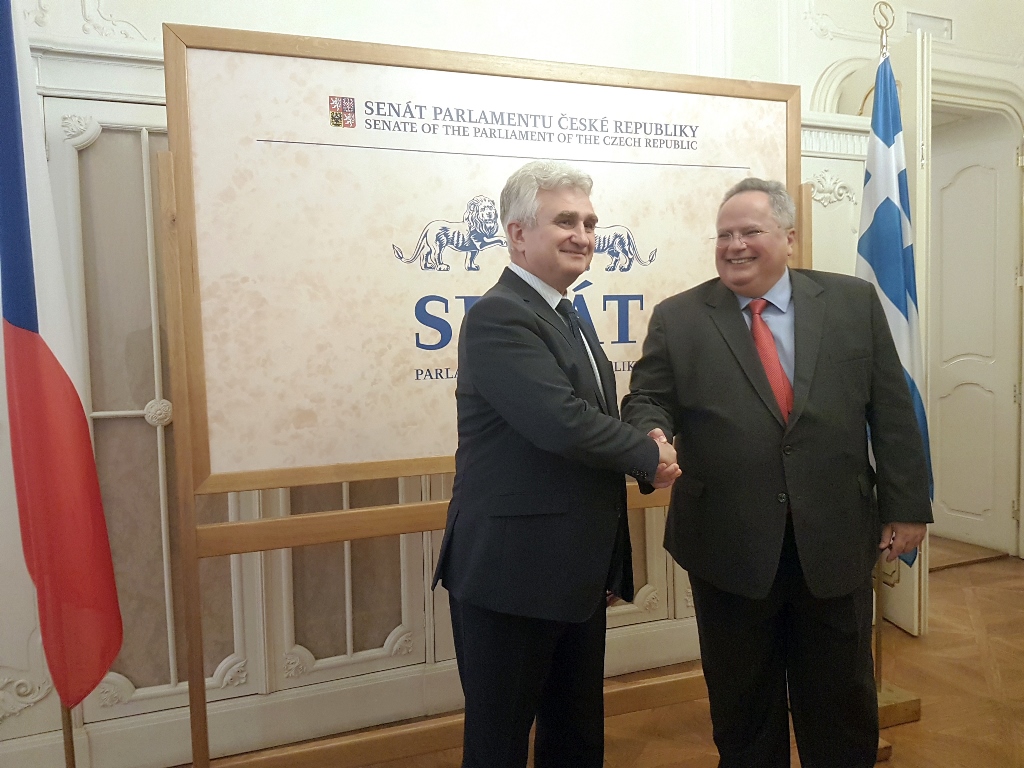 Minister Kotzias met with Czech Prime Minister Buhoslav Sobotka (1), Senate President Milan Stets (2) and Foreign Minister Lubomir Zaoralek (3). On a bilateral level, both sides are looking to strengthen political dialogue with each other through more frequent consultations both on a political and service level, as well as through seeking ways to increase trade and economic transactions between them.

The two Ministers expressed their mutual volition to further enhance the Greek and Czech relations, not only at bilateral cooperation level, but also towards the establishment of a better future in Europe in their joint statements after their meeting in Prague. Minister Kotzias said that the future of the EU is a matter that concerns both countries very much and that they must contribute to a substantial discussion among the partners, the societies and the institutions on the future of Europe, he noted. 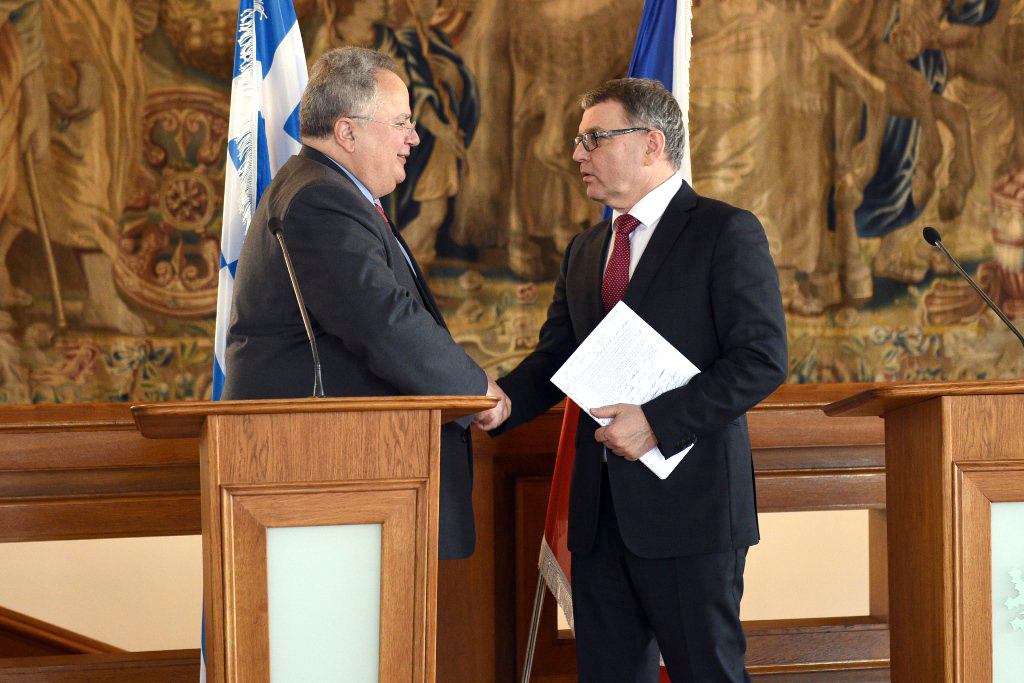 “The future of the European Union is something that concerns us very much because we are countries that have approximately the same population,” said Minister Zaorálek.

“We must agree on our vision, principles and values that will be supported in order to promote a social Europe and render it, once again, attractive to its citizens and to the new generation… We must prevent Europe’s fragmentation,” added the Greek Foreign Minister. “We are facing two huge and difficult geostrategic and geo-economic problems. The Brexit and the stabilisation of our relations with Turkey,” he said. Regarding the second item, he underlined that “the Turkish side must decide if they want to work and promote the necessary reforms in order to be included in the EU”.

On the western Balkans, both Ministers agreed that their course to the European Union and Euro Atlantic structures should be further supported, but to also contribute to the development of the political culture of consensus and compromise.

Replying to a question on the condition of the Greek economy, Minister Kotzias said: “We have many difficulties, but we have a plan on how we will face the crisis and return to high growth rates. All indications show that this year will be a record year in the foreign trade between Greece and the Czech Republic. Last year we had a reduction in the tourist flow, but this year it will be over 400,000 arrivals to half a million. The development of our relations with the Czech Republic is another fact that contributes to the stabilisation and growth of our economy,” he said. According to diplomatic sources, the two Ministers also referred to the policy of the Visegrad countries, while during the working lunch, the two delegations agreed that the two Ministers will meet once a year and hold political deliberations between the two Ministries on several issues.

On the situation in the Middle East, they referred to Syria where the Czech Republic is the only European country that continues to have an Embassy. The two countries agreed to closely cooperate on the issue provided that Greece will send, in the near future, a special delegate to Beirut who will monitor Syria’s issues. They also discussed relations with Turkey, the stance of both countries in Egypt and the migration issue.

Minister Zaorálek invited Greece to participate in the European Conference on Security which will be held in Prague on June 9th and expressed his country’s will to open an Honorary Consulate on Corfu. Finally, they examined the possibilities for economic cooperation on several sectors such as tourism.

After his meetings in the Foreign Ministry, the Greek Minister met with the President of the Senate Milan Štěch. Their talks focused on the migration issue, with Minister Kotzias expressing Greek positions and reminding him that Greece had warned in advance of the outburst of migration while stressing the need for the EU-Turkey agreement to be respected by both sides.

The Foreign Minister also referred to the Greek position on the Cyprus issue, which is an issue of invasion and occupation and the clear position that there can’t be a solution if Turkey maintains its intervention rights or the fulfillment of irrational demands such as the four freedoms.

Before his departure for Athens, Minister Kotzias met with Prime Minister Buhoslav Sobotka who expressed his pleasure over the success of Kotzias’ visit to Prague. The two officials discussed the course of the Greek economy and the strengthening of Greek-Czech relations, as well as the implementation of the EU-Turkey agreement on the refugees, EU-Turkey relations and the future of Europe and its institutional function. Both expressed their skepticism on ideas and proposals expressed for a two-speed Europe and also expressed their pleasure over the new chapter of a closer bilateral cooperation between the two countries.

Previous Interview with H.E. the Ambassador of the Republic of Malta, Joseph Cuschieri
Next Foreign Minister meets with leadership in Algiers