Foreign Minister meets with the leadership of the Republic of Cyprus 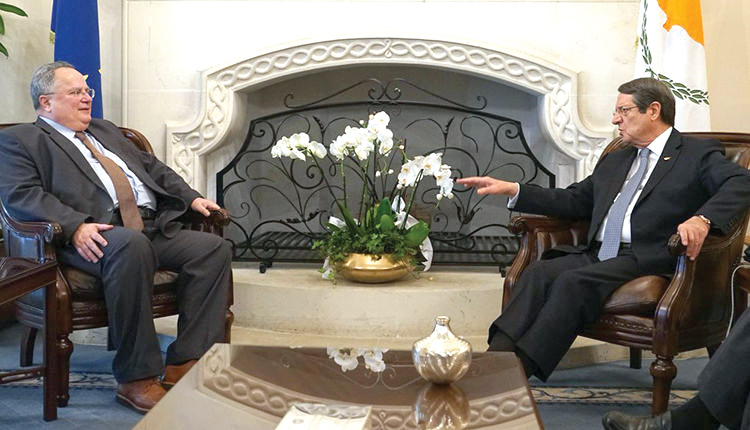 Foreign Minister Nikos Kotzias visited Cyprus at the end of last month to represent the Greek Government at the annual student parade to mark the Greek Independence Day on Saturday March 25th. Whilst in Nicosia, Minister Kotzias met with President Nikos Anastasiades, Foreign Minister Ioannis Kasoulides and later with House President, Demetris Syllouris, followed by contacts with political party leaders. On the last day of his Official Visit, the Greek Minister addressed an event of the Makarios III Foundation following an invitation by Archbishop Chrysostomos II. 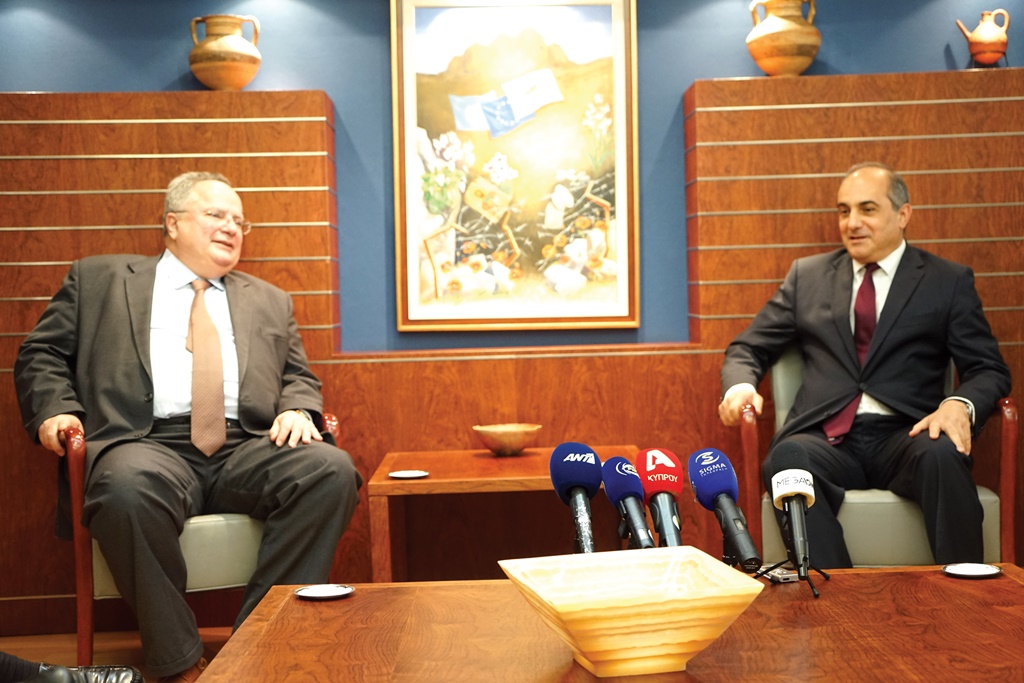 Kotzias discussed the recent developments on the Cyprus issue. Minister Kotzias said that they discussed the resumption of the negotiations and the stance that both countries will keep. “We talked about the international climate, the latest changes and my recent meetings in the US,” he underlined. We share common views on the next steps regarding the Cyprus issue, President Anastasiades posted on Twitter after the meeting with the visiting Greek Foreign Minister.

In his address on the occasion of the celebration of 25th March, Greek Independence Day, in Nicosia, he said that many people thanked him for his stance on the Cyprus problem and that he wants to reiterate that “our position towards Cyprus is our duty”, adding that he was moved when he earlier watched the students’ parade in Nicosia. “We must consistently pursue what is right and just, not only for us, but for the others as well,” he said, noting that the Greek Revolution of 1821 was successful because it was linked to an international solidarity movement “something which dictates to us as Foreign Ministers that we must do our best to be understood.” The Greek Foreign Minister further noted that “we also feel that we have a duty towards Cyprus because we were not able to prevent (the Greek) Junta”, adding that “we always feel the need to say that we are sorry for the crimes which some people committed.” 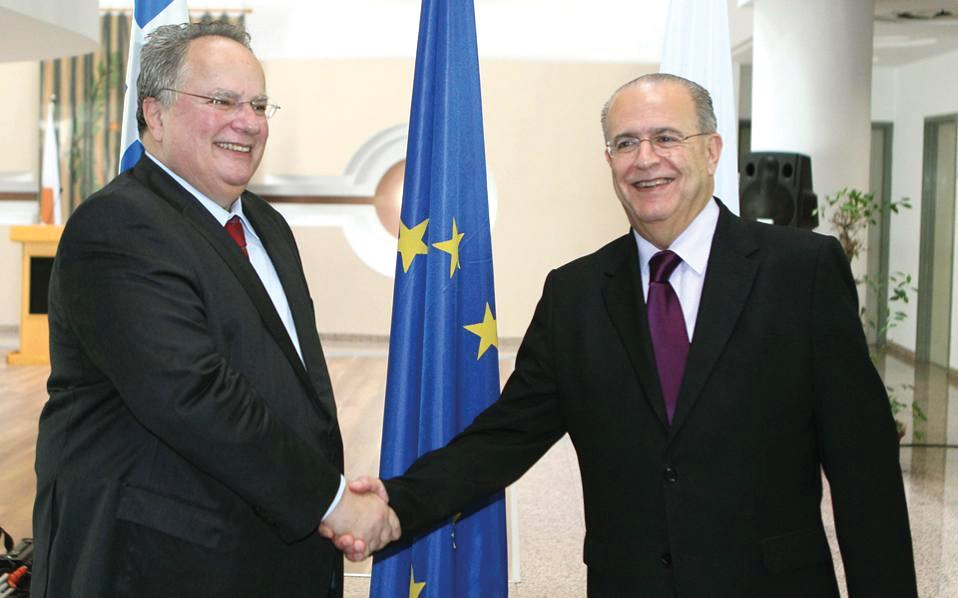 In his address, Foreign Minister Kasoulides said that the 25th of March gives Cyprus the strength to continue its struggle, having the support of Greece, adding that today’s Anniversary is an ideal which highlights the values and ideas which Greece and the Greeks have defended. The Cypriot Foreign Minister expressed on behalf of all Cypriots Cyprus’ support to the immense effort which the Greek Government and people have undertaken to deal with the financial crisis and move towards sustainable development and not based just on its lenders’ orders. Referring to the trilateral cooperation which the two countries have developed with countries of the region, he noted that it aims at the political, social and financial development of the region and already has concrete results.

The Cypriot Foreign Minister said after their meeting at the Foreign Ministry that Greece was making “diligent and tireless efforts to find a viable and European solution to the Cyprus problem, without anachronistic military guarantee systems”. 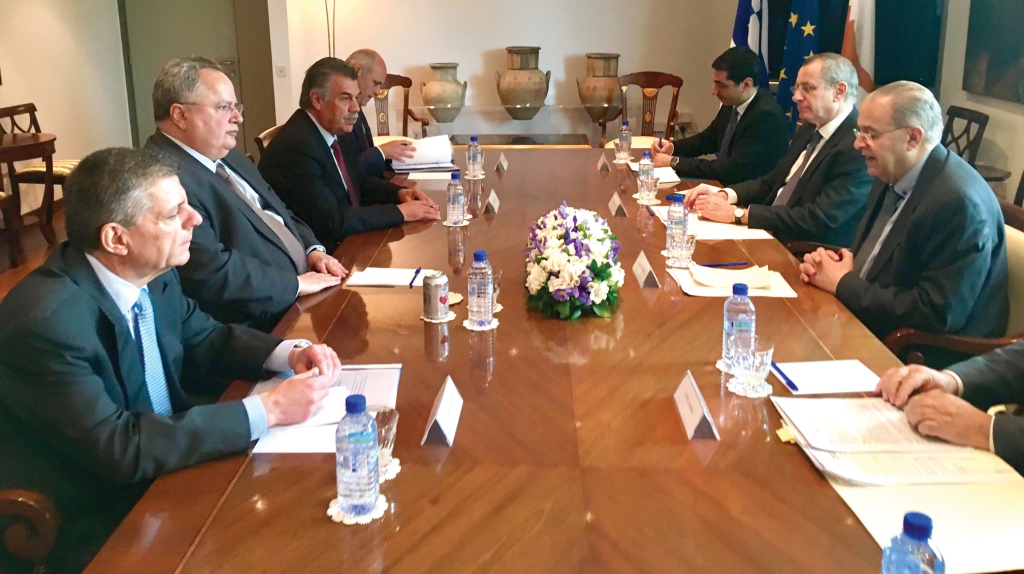 Minister Kotzias, commenting on the Cyprus issue, said the problem had two aspects, both internal and external. Greece, he said, had never meddled or expressed an opinion on the internal aspects, because Athens “fully and completely supports the policy of the Republic of Cyprus”. On the external aspect, the Greek Minister said the feeling he got from the talks in Geneva earlier this year was that Turkey was not ready to deal on the issue of guarantees. “It may not even want to discuss the issue as it does not want to relinquish its non-existent illegal right to intervene,” he said. At the same time, he said Greece wanted to maintain the channels of communication with Turkey though Ankara appeared to prefer “abandoning discussions and making noise”. 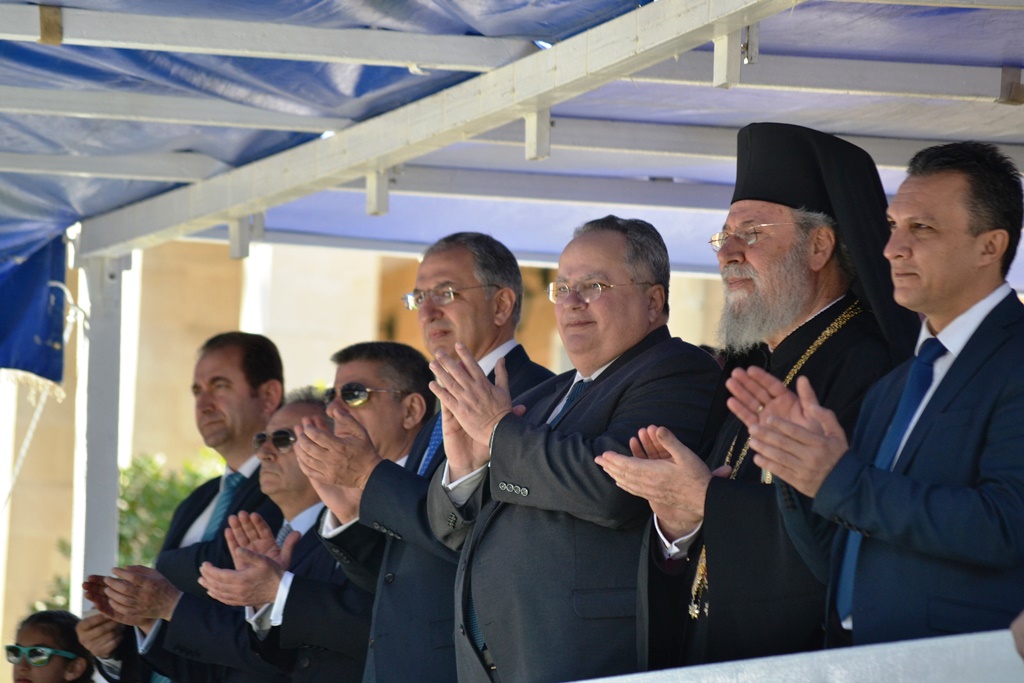 Athens’ position on Cyprus is a duty Greece has to fulfil, Minister Kotzias said on the 25th of March, adding that “we strive consistently so that all Greek Cypriots feel safe to the greatest possible extent in their homeland and that Turkish Cypriots and the three smaller communities in Cyprus enjoy their rights to the maximum possible degree.”

Addressing a reception in Nicosia, at the Greek Ambassador’s Residence on the occasion of the Greek Independence Day, Foreign Minister Kotzias said that Cyprus needs a viable and effectively functioning settlement and this has always been a priority for Greece. 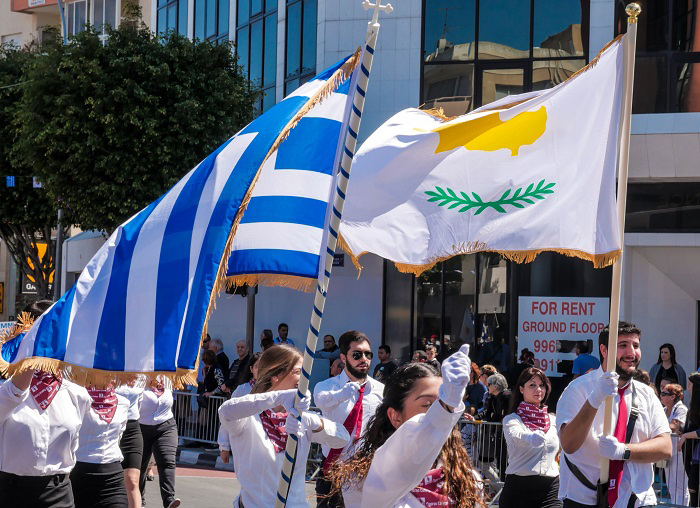 On his part, his Cypriot counterpart thanked the Greek Government for its support and its constructive efforts for a viable and functional settlement of the Cyprus issue. He assured that “on our part we will continue to support Greece with all our strength, both at the bilateral level and within the EU, to address the challenges it faces.” Such a challenge, as he noted, is the big influx of migrants who arrive in Greece. Cooperation between the two countries, he said, is probably more productive now than ever before on a bilateral, regional and multilateral level.

The reception was attended by Archbishop Chrysostomos, members of the political leadership, foreign ambassadors, other officials and many people who congratulated Minister Kotzias, Greek Ambassador Elias Photopoulos and Embassy staff. 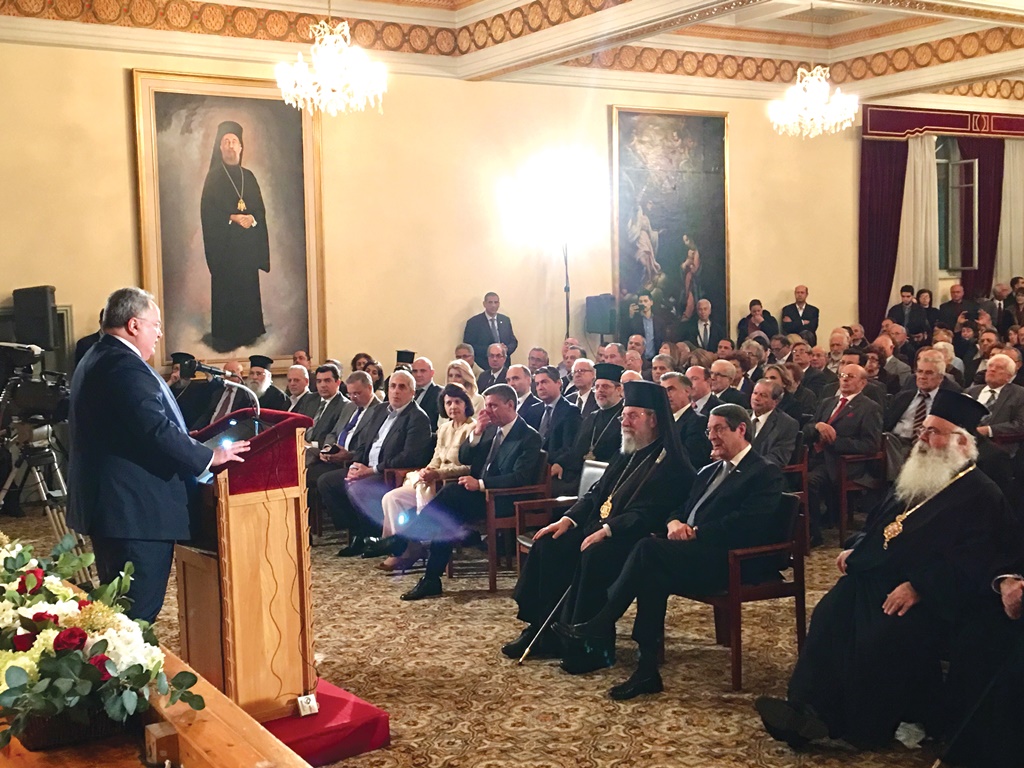 The Greek Foreign Minister criticised harshly the handling of the Cyprus issue by different actors during a speech at an event at the ‘Archbishop Makarios III Foundation’ in Nicosia, which marked the Anniversaries of the start of the Greek Revolution on March 25th 1821 and the start of Eoka’s struggle against the British on April 1st 1955. Concerning the international aspect of the Cyprus problem, the Greek Head of Diplomacy reiterated it is made up of three interrelated problems: the guarantee scheme, the supposed intervention rights of third parties in Cyprus and the presence of foreign troops on the island. He reiterated the position expressed by Greece since 2015 to abolish this scheme, without reservations, as illegal under contemporary International Law and all UN Resolutions and focused on the efforts made by several sides not to include the issue in the agenda of the talks.

“This was seen in Geneva,” he said and referred to the hasty departure of Turkish Foreign Minister Mevlüt Çavuşoğlu from the Swiss capital, saying the Turks left because they did not want or could not discuss this issue. “It was obvious that (…) they were seeking a pretext to break the negotiations on other issues. They now know very well that they cannot convince anyone in the world that they are entitled to have a military presence and the right to intervention in Cyprus. So they chose a win-win option: to raise new, unrelated issues in order to cover the inability or unwillingness to discuss the main issue, or at best to win the ability to control the island with civilian means, so they could compromise on other issues. So this is how we ended up with the demand for the right of ‘four freedoms’ for the Turks,” he said.

Minister Kotzias said he wasn’t surprised by Ankara’s position after Geneva. What did surprise him more, he said, was “the behaviour of an international mediator who confessed to not having read the decisions of the organisation he’s working for in the two years of his handling of the Cyprus issue. What was this mediator doing? Instead of mediating between the two communities, did he declare himself a mediator between Turkey and the EU? Does he have such an authorisation and by whom?”

“If Turkey has a request to make to the EU it should go itself and negotiate, but others have no business believing that, on the occasion of the Cyprus issue, they should help meet Turkey’s requirements in its relations with the EU,” the Minister said.

Photos: Greek Foreign Minister Nikos Kotzias said that the effort to reach a solution to the decades-old division of Cyprus will require Greeks to unite during his meetings in Nicosia with President Nicos Anastasiades; President of the House of Representatives Demetris Syllouris; and his counterpart, Foreign Minister Ioannis Kasoulides. Addressing the event of the Makarios III Foundation following an invitation by Archbishop Chrysostomos II; Greek Foreign Minister Nikos Kotzias joins the leadership of the Republic of Cyprus to witness the annual student’s parade on the occasion of the Greek National Day, March 25th.