Prime Minister of the Commonwealth of Dominica visits Greece 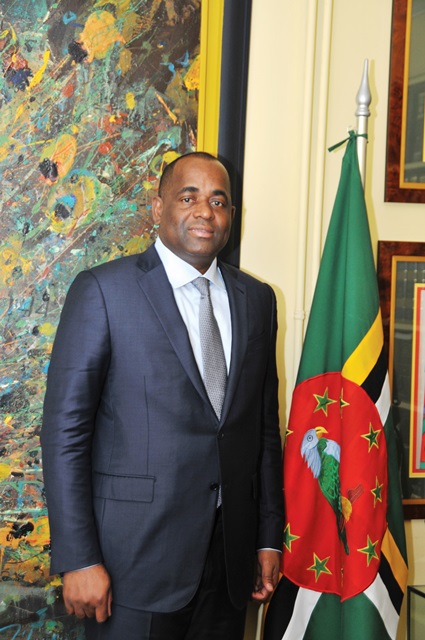 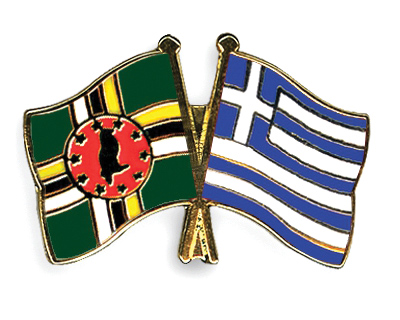 The Honourable Roosevelt Skerrit, Prime Minister of the Commonwealth of Dominica was on a working visit to Greece from January 26th-30th, during which time he met individually with Prime Minister Alexis Tsipras, Minister of Maritime Affairs and Insular Policy Panagiotis Kouroumblis and Alternate Foreign Minister George Katrougalos.

Prime Minister Skerrit gave great importance to the fruitful meeting with the Minister of Maritime Affairs and Insular Policy, Panagiotis Kouroumblis. The purpose of the meeting was to explore possibilities of cooperation between the two countries on issues of mutual maritime and commercial interests, both bilaterally and internationally. 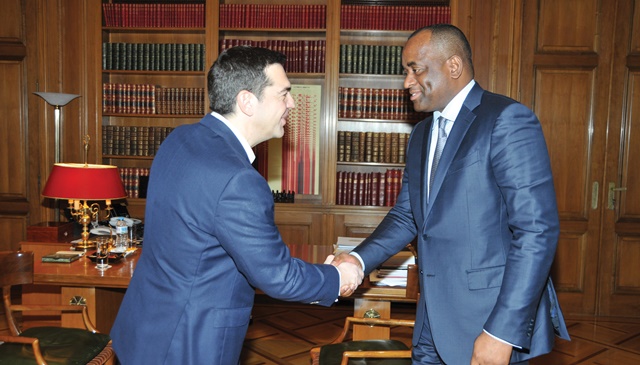 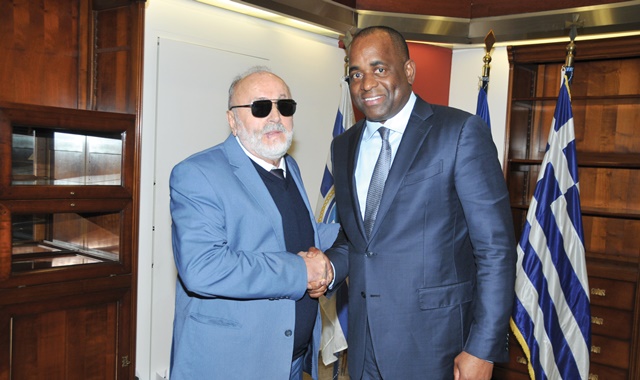 The Honourable Roosevelt Skerrit noted the priority that Dominica attaches to the enhancing of maritime relations with Greece, beginning with the signing of bilateral contractual agreements that will contribute to this. In addition, Prime Minister Skerrit referred to the active participation of Dominica in the Caribbean Community (CARICOM) and the key points of interest in the maritime transport sector of the abovementioned regional formation.

Minister Kouroumblis referred to the leading role of Greece in the global shipping industry, highlighting the keen interest of Greece to enhance maritime ties with Dominica. 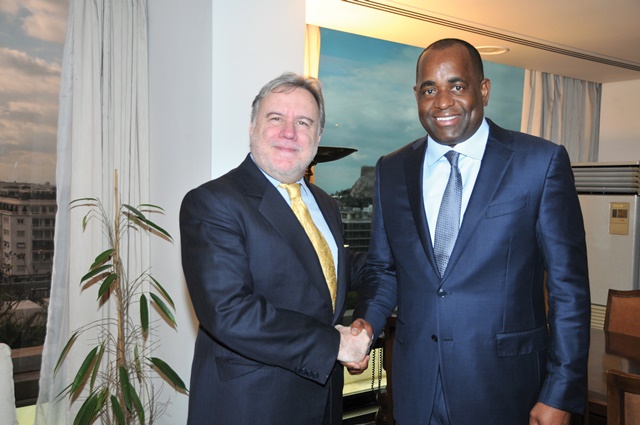 Finally, he referred to the possibility of strengthening the two countries’ cooperation ties within the International Maritime Organisation (IMO), of which both countries are members.

The meeting ended in an excellent climate, with the two sides agreeing to strengthen their bilateral cooperation on issues of mutual maritime and economic interests.

The visiting Prime Minister of the Commonwealth of Dominica received an especially warm welcome during his meeting with Alternate Minister of Foreign Affairs George Katrougalos. The Alternate Minister reaffirmed the intention to strengthen the EU’s relations with CARICOM, of which Dominica is a member, while also noting the Greek side’s interest in expanding bilateral relations. 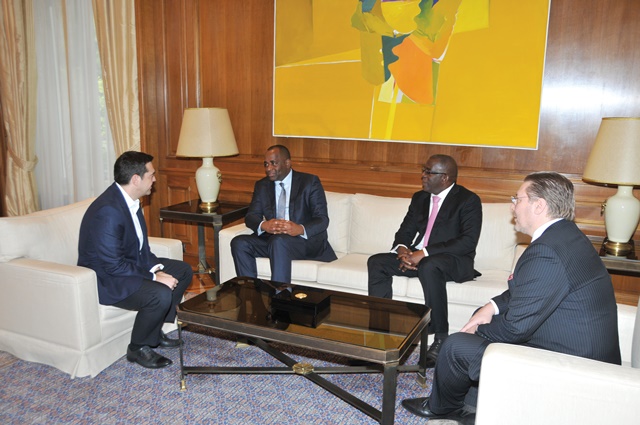 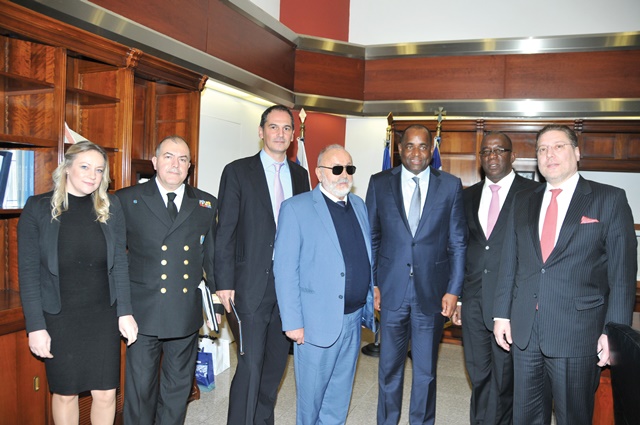 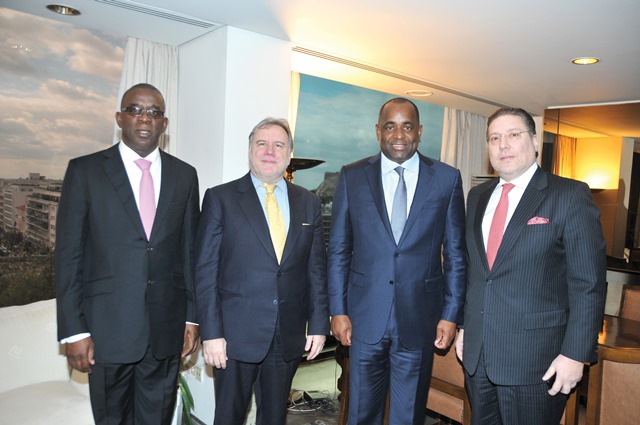 The visiting Prime Minister thanked Minister Katrougalos for Greece’s positive stance within the EU, particularly on the issue of waiving Schengen visas for citizens of Dominica, and also noted his country’s interest in the future signing of a bilateral agreement in the shipping sector.

Greece established diplomatic relations with Dominica on 15th November 2005. Greece is represented in Dominica via parallel accreditation of its Embassy in Caracas. Dominica has appointed an Ambassador accredited to Greece, based in Roseau, Dominica.

The Nature Isle of the Caribbean

Dominica, officially the Commonwealth of Dominica, is a sovereign island country in the Lesser Antilles archipelago in the Caribbean Sea. The capital, Roseau, is located on the leeward side of the island. The island, originally inhabited by the Kalinago and later colonised by the Europeans, today boasts a population of approximately 72,000.

Dominica has been nicknamed the ‘Nature Isle of the Caribbean’ for its unspoiled natural beauty. It is the youngest island in the Lesser Antilles, still being formed by geothermal-volcanic activity, as evidenced by the world’s second-largest hot spring, Boiling Lake. The island has lush mountainous rainforests and is the home to many rare plants, animals and bird species. The Sisserou parrot, also known as the imperial amazon and found only on Dominica, is the island’s national bird and featured on the national flag. Dominica’s economy depends on agriculture and tourism and it has a thriving university of medicine which is attended by many international students. 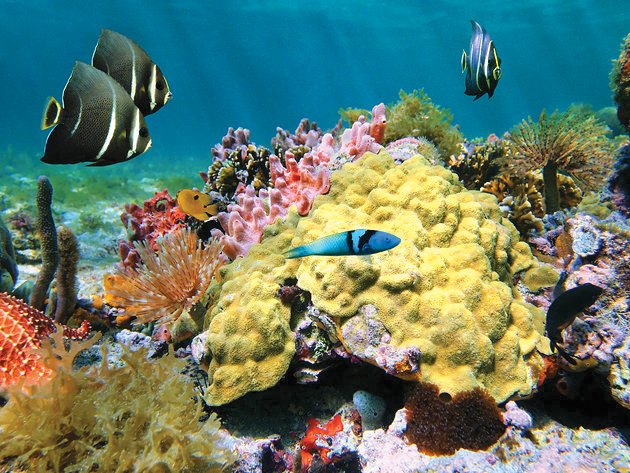 International trade
Dominica is a beneficiary of the Caribbean Basin Initiative (CBI) that grants duty-free entry into the United States for many goods. Dominica also belongs to the predominantly English-speaking Caribbean Community (CARICOM), the CARICOM Single Market and Economy (CSME) and the Organisation of Eastern Caribbean States (OECS).

Tourism
Known as ‘The Nature Island’, Dominica’s tropical rainforests cover two thirds of the island and are home to 1,200 plant species. Rivers, lakes, streams and waterfalls abound, fed by the island’s high annual rainfall, giving the island a primordial beauty housing many stunning natural wonders. The Morne Trois Pitons National Park was the first UNESCO World Heritage Site in the eastern Caribbean, whereas the 115-mile long Waitukubuli National Trail, is the greatest hiking destination in the Caribbean. 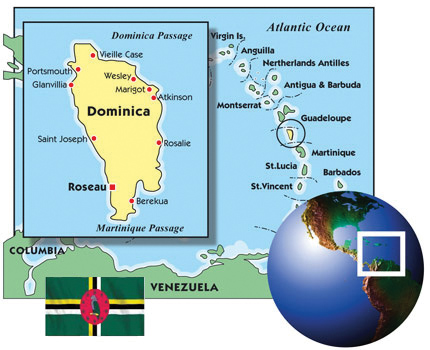 Its volcanic physique points to extensive geothermal activity – even underwater. With its beautiful marine life, untouched habitats and populated marine reserves, diving in Dominica certainly deserves to be considered the world’s best.

Simply put, this is the most naturally beautiful island in the Caribbean.