Greece always supports the need for peace in Ukraine 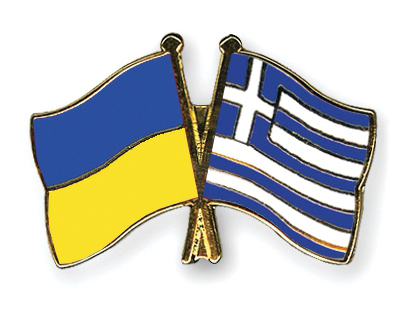 Prime Minister Alexis Tsipras paid a visit to Ukraine on February 8th-9th in order to hold talks with the political leadership, as well as with representatives of the Greek community. He was accompanied by Foreign Minister Nikos Kotzias, Deputy Foreign Minister for Greeks Abroad Terrence Quick and the head of the Foreign Ministry’s International Economic Relations General Secretariat, George Tsipras.

On the first day, Premier Tsipras met with his Ukrainian counterpart Volodymyr Groysman, whilst on the second he was received by President Petro Poroshenko. 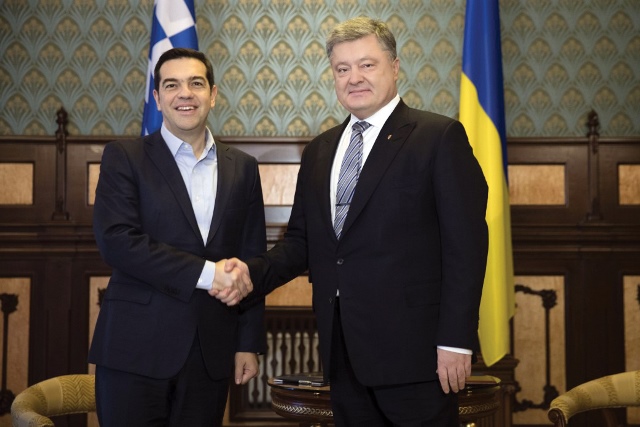 The two delegations were said to have held broad talks before joint statements were made to the press, followed by separate working dinners between the two Premiers and the President and their delegations.

The Greek delegation also visited the museum and Cathedral of St. Sophia in Kiev, while in the afternoon they met with representatives of the Greek Community in Ukraine.

Prime Minister Tsipras’ visit to Ukraine took place in a very dangerous period of time due to renewed hostilities, however, there are a number of reasons for this visit, diplomatic sources said to the Athens-Macedonian News Agency (ANA).

First of all, the fact that Athens adheres to the doctrine of the multidimensional foreign policy. The developments in Ukraine determine to a large extent the Euro-Russian relations and this is considered rather important for the government. Moreover, US-Russian relations have entered a new phase, following the election of the new US President, Donald Trump. 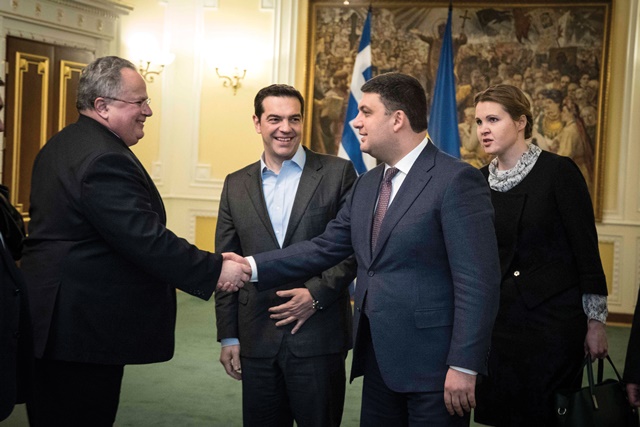 In addition, the Greek government has a great interest in security in the region, part of which is certainly the Black Sea “neighbourhood.” More particularly because many thousands of Greek origin Ukrainians live in Ukraine, some of them in very dangerous areas.

Prime Minister Tsipras called for the implementation of the Minsk Agreement in Ukraine during a joint press conference with Ukrainian counterpart Volodymyr Groysman in Kiev.

The two leaders discussed at a private meeting earlier bilateral relations and international developments, as well as economic cooperation. “I want to note that Greece has a particular interest in the wider Black Sea area, with which it is connected through ties. More than 100,000 Ukrainian citizens of Greek origin live in Ukraine and speak the Greek language,” he said.

As regards economic cooperation, the Greek Prime Minister stated that “we decided to hold an inter-ministerial meeting in the near future,” stressing that there are significant opportunities ahead. He also referred to the Greek Ukrainian Economic Forum taking place in Kiev. Finally Alexis Tsipras called the meeting with his Ukrainian counterpart very important.

In a joint statement with Ukrainian President Petro Poroshenko following their meeting in Kiev, Premier Tsipras said that they discussed the recent developments in the crisis in Ukraine and efforts to find a solution to a crisis recently rekindled.

“The Greek people have close historic and cultural relations with the wider region,” said the Greek Head of Government adding that a large Greek community resides in the area of the conflict. “We discussed the possibilities of cooperation in the infrastructure, energy and tourism sectors and the strengthening of political bonds,” he said, adding that there must be a clear roadmap to overcome the crisis.

“Greece respects the sovereignty and territorial integrity of Ukraine and with President Poroshenko we talked about the safety of the Ukrainian citizens of Greek descent.”

“Greece will not fragment European unity in the case of tougher sanctions against Russia,” Premier Tsipras said replying to questions during a joint press conference with Ukraine’s President. “Greece is a member-state of the European Union and, despite the fact that it has a particular economic interest in an immediate resolution to the crisis and the lifting of sanctions that have had an extremely painful effect on the Greek economy, nevertheless we will not fragment European unity,” he said. 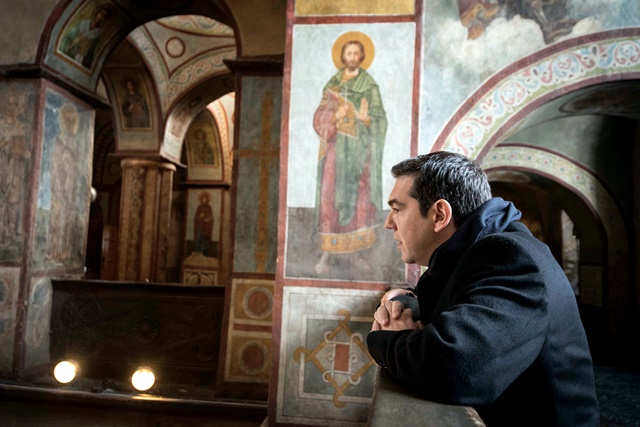 At the same time, Premier Tsipras noted that the other side must have incentives to take steps and that channels of communication, dialogue and diplomacy must be kept open.

While a hard stance might be necessary, by itself it would not be effective, he suggested, pointing to examples from the international experience where such tactics did not bring results. “In this sense, the Greek stance could be more useful than that of the other EU member-states,” he added.

The Greek Prime Minister said his talks with President Poroshenko were also an opportunity to brief the Ukrainian Head of State on developments concerning the Cyprus issue, since Ukraine holds the chair of the UN Security Council during this month, and relay a message from the European Commission reporting progress on the issue of visas for Ukrainian citizens.

Earlier in the press conference, the Greek Prime Minister said that Greece’s position called for respect of International Law and support for the new prospects in relations between the West with Russia.

“We agreed on the need to observe the truce and chiefly on the implementation of the Minsk Agreement,” he said, noting that this was a position steadily adopted by Greek diplomacy. He also noted Greece’s support for all mediation efforts to end the crisis.

Asked about relations between the EU and Russia, Prime Minister Tsipras said the crisis in the Ukraine had affected these “as a whole” and stressed the need to mobilise the processes for a clear roadmap to overcome the crisis.

Pictured above: The President of Ukraine, Petro Poroshenko, receives the visiting Prime Minister of Greece, Alexis Tsipras; Ukrainian Prime Minister, Volodymyr Groysman, greets Greek Foreign Minister Nikos Kotzias in the presence of Premier Tsipras; a moment of thought for Prime Minister Tsipras as he visits the Cathedral of Saint Sofia in Kiev, a world famous historical and architectural monument of the first half of the 11th Century – the name of which comes from the Greek word ‘sofia’, which means ‘wisdom’.