Desire to intensify its relationship with the European Union 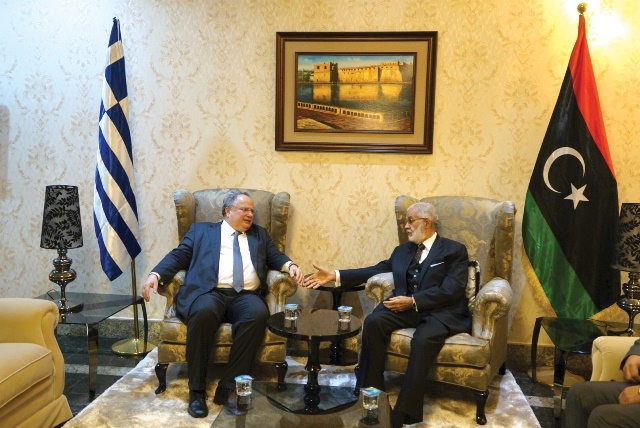 Foreign Minister Nikos Kotzias recently carried out a visit to Tripoli for talks with the Chairman of the Presidential Council of Libya and Prime Minister of the Government of National Accord Fayez Mustafa al-Sarraj, and Foreign Minister Mohamed Taha Siala, noting that he was very thankful for this invitation and the opportunity that he was given to visit Libya.

After their talks, the two Heads of Diplomacy gave joint statements to the press, during which time the Greek Minister spoke about the people of Libya and Greece, who as he pointed out, have a very long, common history, many common elements in their culture and in their civilization. He said that during his talks with the Prime Minister and the Foreign Minister of Libya, the will to strengthen their cooperation in many sectors was reaffirmed. They spoke about cooperation on economic goals they have set together, the training of the coastguard of Libya and potentially the Presidential Guard as well, the creation of networks with universities, research centres, etc. 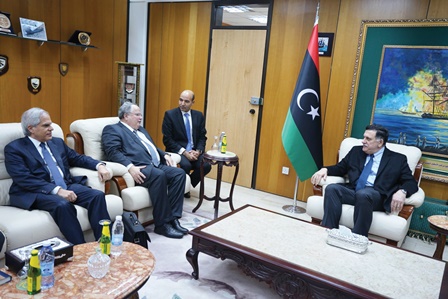 “We picked up the thread of foreign policy over the last two-to-three years overall. We came to re-strengthen our relations with Libya and to talk with my colleague about matters of political, economic, cultural and educational cooperation. We looked at ways in which we can help Libya to improve its communication and intensify its relationship with the European Union. We talked about and agreed on forms of cooperation at all levels, as concerns the two Foreign Ministries, and we discussed the prospects we will have for cooperation between the two States, Greece and Libya, in tourism and in the management of the major migration problem. It is well known that Libya doesn’t ‘send’ migrants. In fact the migration flows pass through this country and, as such, right now there are over a million people from Central Africa on Libyan territory,” Minister Kotzias said.

At the core of the discussions was also the cooperation between the two Ministries, specifically in areas that concern European integration. “Greece has invited groups of people from the Ministry of Foreign Affairs of Libya to visit Greece, to use our knowledge and expertise on issues concerning the European Union. We discussed the situation in our region and our common interests in security and stability in the Mediterranean,” Minister Kotzias said, further inviting his colleague to visit Athens.

On the question what controls Libya can implement with regard to the migration problem, the Greek Chief of Diplomacy mentioned the programme that Libya had put together two years ago; a programme that needed a large investment of over €600 million – today, perhaps €1 billion – for electronic monitoring and control of its southern borders. Minister Kotzias pointed out, that the European Union has yet to find the money or the willingness, but it needs to do so for this programme to be implemented in collaboration with Libya. 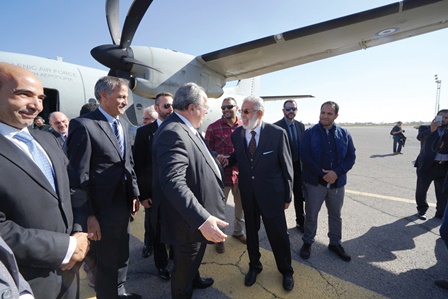 On the other major issue, with regard to the strengthening of Libya’s territorial integrity and unity, the Greek Minister stressed the need for there to be cooperation between forces that are against terrorism, and, in fact, he said that Greece is always at the disposal of Libya and other states in the region for mediation. “As you know, our country very often facilitates talks between third countries, without publicity, and I think that we once again we have strengthened the ties of friendship we have had with this region and its people since antiquity,” he added.

Finally, Minister Kotzias noted that Greece is anxious to reopen its Embassy in the capital, which closed in the summer of 2014 along with most other Western missions and then relocated to Tunis. He said that the reopening of the Greek Embassy in Tripoli would take place at the beginning of next year and Athens will proceed to the appointment of an Ambassador to Libya.

Foreign Minister Nikos Kotzias pictured in discussion with his Libyan counterpart, Foreign Minister Mohamed Taha Siala; with the Chairman of the Presidential Council of Libya and Prime Minister of the Government of National Accord of Libya Fayez Mustafa al-Sarraj; and being welcomed at the airport.