Foreign Minister of the Federal Republic of Germany visits Greece 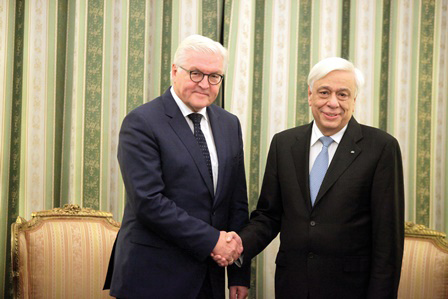 German Foreign Minister Frank-Walter Steinmeier, who is also running as Social Democratic Party of Germany (SPD) candidate for German President, paid a two-day Official Visit to Greece on December 4th-5th, stating that although Greek-German relations had suffered from misunderstandings in the past, they should return to the traditionally good level.

The timing of the visit, which comes soon after Turkish President Recep Tayyip Erdogan made statements seeming to question the 1923 Lausanne Treaty establishing the Greek and Turkish borders in the Aegean, as well as the implementation EU-Turkey agreement on migration and developments in the Cyprus talks, is seen as particularly important. In an interview with the Greek newspaper ‘Kathimerini’, Minister Steinmeier made clear that the Lausanne Treaty was “indisputable” and that “the issue is clear from the point of view of International Law and no one can dispute this.” He also expressed conviction that “it is in Turkey’s interest to continue implementing the agreement on the refugee crisis.” 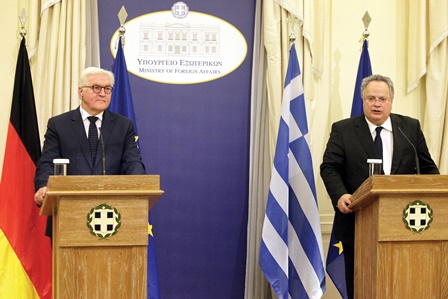 The German Foreign Minister said Greece’s European partners have made it clear that Greece “is not being abandoned to its fate” and urged all sides in the Cyprus issue to demonstrate a “constructive attitude” so that the Cypriots can see their country reunited, as Germany was in the past. 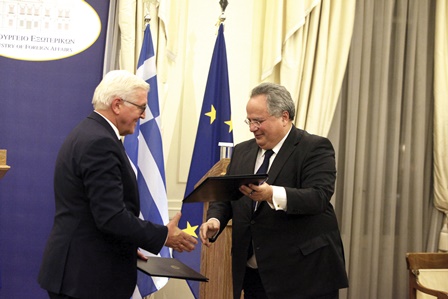 Foreign Minister Kotzias underlined that in order for Turkey to have a European orientation, it needs to keep a low profile and implement International Law, which also means to apply and respect the Treaty of Lausanne. Because some of its provisions, such as the autonomous administrative status of Imvros and Tenedos islands, are not respected, he said, adding: “We want a European democratic Turkey to join the EU, we want a neighbour country that will comply with the International and European Law.”

Both officials expressed their optimism over the Cyprus issue, stressing that a solution to the problem would have a positive impact on the future of the region and the EU. “Of course a solution that will be based on the European and International Law without guarantees and occupation troops,” Minister Kotzias stressed. 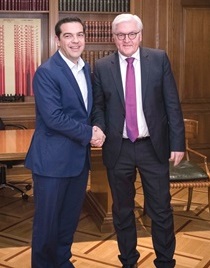 During his visit to Thessaloniki, Minister Steinmeier joined Foreign Minister Kotzias  for the official opening of the ‘Divided Memories 1940-1950’ exhibition at the Macedonian Museum of Contemporary Art, organised in collaboration with the Goethe-Institut Thessaloniki, the Jewish Museum of Thessaloniki and the Deutsches Historisches Museum in Berlin. After the exhibition opening, the two ministers returned to Athens where Minister Kotzias hosted a dinner for his German counterpart at the Acropolis Museum, before the latter was received by President of the Hellenic Republic, Prokopis Pavlopoulos.

The German Minister also met Prime Minister Alexis Tsipras and the leader of main opposition New Democracy Kyriakos Mitsotakis. The Premier’s meeting focused directly on the ongoing refugee crisis plaguing Greece and the rest of Europe, the economic crisis, as well as bilateral relations. On his part, the German Minister referred to the need to strengthen bilateral relations, particularly in the terms of exports and trade. In terms of the refugee issue, Minister Steinmeier said refugee flows affect all of Europe, adding that he agrees that Turkey’s border protection must be increased.

The EU is best suited to help stop the war in Syria and promote peace in the Middle East, President Pavlopoulos said during his meeting, adding that Greece’s borders are Europe’s borders, however, each country is responsible for deciding how best to protect them. Minister Steinmeier said that no solutions will be found if each state lays responsibility for the refugee crisis on the other, adding that a common European policy is needed to tackle the problem. He also said that burdens must be shared more equally.

Visiting German Foreign Minister Frank-Walter Steinmeier meets with the President of the Republic, Prokopis Pavlopoulos; with Prime Minister Alexis Tsipras; giving statements to the press discussing the urgency of the on-going refugee crisis plaguing Greece and the rest of Europe, the economic crisis, as well as bilateral relations with his Greek counterpart, Nikos Kotzias; visiting the German School of Athens. (Photographs by G.Kontarinis/Eurokinissi & A.Bonetti.)