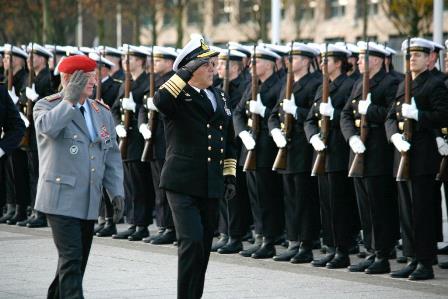 At the end of last month, the Chief of the Hellenic National Defence General Staff (HNDGS), Admiral Evangelos Apostolakis HN, paid an Official Visit to Germany, following an invitation extended to him by his counterpart, General Volker Wieker.

After the official welcoming ceremony in Berlin, the two heads of defence held bilateral talks during which time they discussed the present security environment and the existing constructive cooperation of the Armed Forces of the two countries. 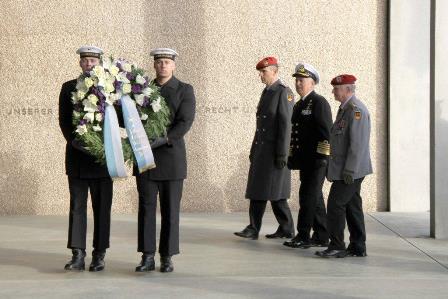 Furthermore, both CHODs referred to the refugee crisis, emphasising the need to put forward policies and practices strengthening cross-border cooperation in order to enhance border surveillance and to continue the NATO and EU operations intercepting the refugee/migration flows in the Aegean and the Mediterranean Sea.

They also brought up issues of mutual interest and the prospects for the further strengthening of the bilateral Armed Forces cooperation, especially in the education/training domain.

In addition, the HNDGS Chief visited the Embassy of Greece in Berlin, where he met with the Greek Ambassador, Theodoros Daskarolis, and he awarded commemorative badges to three German Officers who have attended the Hellenic National Defence College.

Admiral Evangelos Apostolakis’ visit culminated in visiting the Joint Forces Operations Command where he was briefed on its organisation, mission and role.

The Chief of the Hellenic National Defence General Staff (HNDGS), Admiral Evangelos Apostolakis HN pictured during the arrival ceremony on his Official Visit to Germany with his counterpart, General Volker Wieke.

Previous Egyptian Armed Forces Chief of Staff on Official Visit to Greece
Next The Future of Migration Governance – by Md. Shahidul Haque