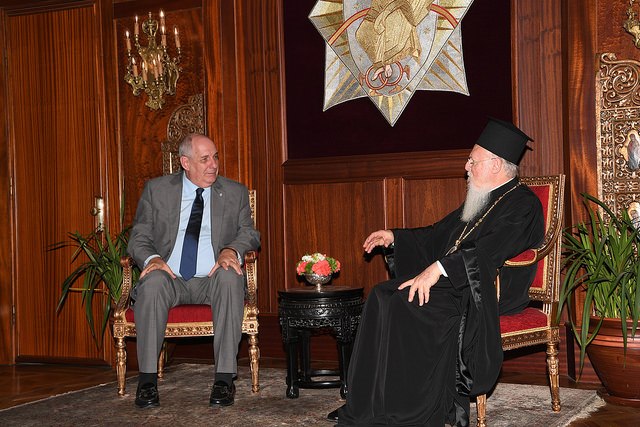 Deputy Foreign Minister, Responsible for Greeks Abroad (Diaspora Hellenes), Terence Quick carried out his first visit in his new capacity to Istanbul where he was received in by His All Holiness Ecumenical Patriarch Bartholomew and met with members of the Greek community there.

With His All Holiness, the Deputy Minister discussed issues concerning the competencies he has taken on regarding Greeks abroad. Mr. Quick also attended the celebratory evening mass held at the Holy Church of Saint Menas, in Samatya, at which the Ecumenical Patriarch officiated. Within the same framework, the Deputy Minister visited the schools of the Greek community and in particular the Zappeion and Zografeion schools and the Great School of the Nation. He completed his visit with a meeting with the Board of the Association for the Support of Greek Community Foundations (SYRKI). 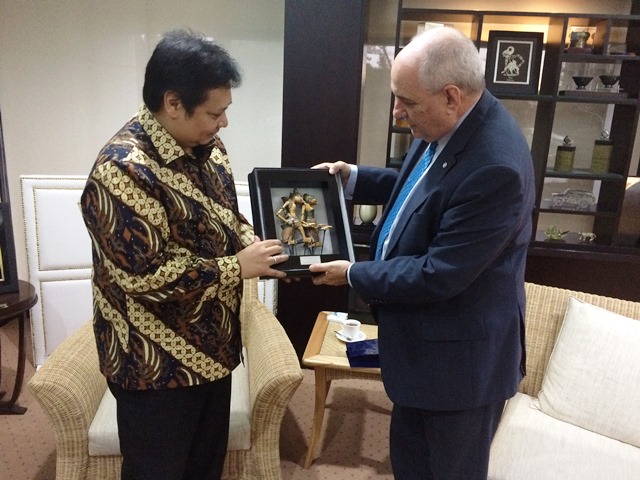 Deputy Foreign Minister Terence Quick was in Jakarta recently, heading a business mission organised by the Foreign Ministry, in collaboration with the Hellenic Federation of Enterprises (SEV) and Athens Chamber of Commerce and Industry (ACCI). It is to be noted that this was the first visit of a member of the Foreign Ministry’s political leadership to Indonesia.

The Deputy Foreign Minister also met with Transport Minister Budi Karya Sumadi, Maritime Affairs and Fishing Minister, Susi Pudjiastuti, and Minister for Industry, Airlanga Hartanto, with whom he exchanged views on the prospects for strengthening bilateral cooperation in their areas of responsibility.

In parallel, the first Greek-Indonesian business conference was held, with B2B meetings between enterprises of the two countries taking place within the framework of the conference. On the margins of the conference, a Memorandum of Cooperation was signed by the ACCI and the Indonesian Chamber of Commerce and Industry (KADIN).

Mr. Quick’s itinerary also included meetings with members of the Parliamentary Committee on Defence, Foreign Relations and Information, with members of the Greece-Indonesia Parliamentary Friendship Committee,  the Economic Coordination Minister, the Minister of Public Works and Public Housing, and, finally, with the President of the Organisation for Promotion of Investments. 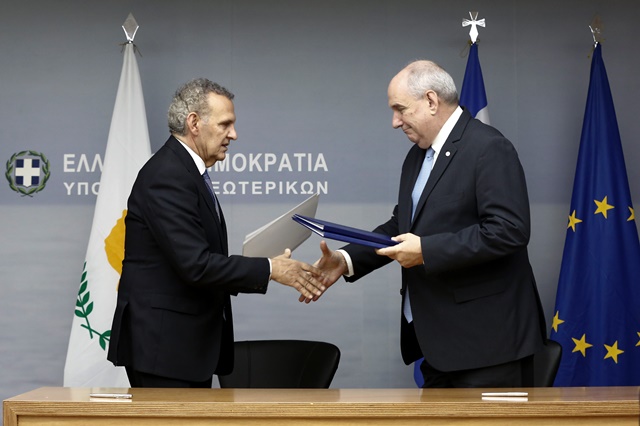 The Deputy Foreign Minister for Greeks Abroad, Terence Quick was received by the Presidential Commissioner for Humanitarian Affairs and Overseas Cypriots, Fotis Fotiou, at the Cypriot Foreign Ministry on November 22nd.

On behalf of their respective Governments, the two gentlemen signed a ‘Memorandum of Understanding on overseas community issues’, which provides for, amongst other things, cooperation in specialised sectors between Greece’s General Secretariat for Greeks Abroad and the Office of the Presidential Commissioner for Humanitarian Affairs and Overseas Cypriots. The Memorandum attaches special importance to the activation of young Hellenes overseas, promotion of cultural and intangible heritage and strengthening of learning and dissemination of the Greek language.

During their meeting, Mr. Quick and Mr. Fotiou also agreed to explore the potential for cooperation with corresponding agencies in third countries. With the singing of the Memorandum, the Greek Deputy Minister stressed: “For me it is of special significance that my first signature, in my new capacity as Deputy Foreign Minister, concerns Cyprus. It is an inter-state agreement that further strengthens the timeless ties of friendship linking the two countries, this time in the sector of our communities abroad.”

Pictured above: Deputy Foreign Minister, Responsible for Greeks Abroad (Diaspora Hellenes), Terence Quick pictured during his meetings with His All Holiness Ecumenical Patriarch Bartholomew at the Patriarchate (photo by N. Manginas); with Minister for Industry of the Republic of Indonesia, Airlanga Hartanto; exchanging the Memorandum of Understanding on overseas community issues with the Presidential Commissioner for Humanitarian Affairs and Overseas Cypriots, Fotis Fotiou, at the Cypriot Foreign Ministry.