Rhodes Conference for Security and Stability; A political vision 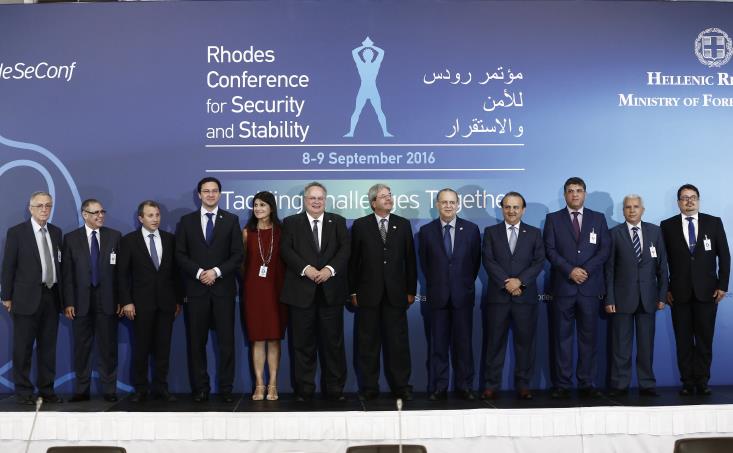 Rhodes Conference for Security and Stability

A political vision; to build stability, security, prosperity and peace

The first Conference for Security and Stability, a Greek initiative for creating an annual forum for open exchange of views, took place on 8th-9th September 2016 on the island of Rhodes, which has been a crossroads of cultures, religions, ideas and trade since ancient times. It brought together the Ministers of Foreign Affairs and high-ranking officials of Greece, Albania, Bulgaria, Croatia, Cyprus, Italy, Slovakia, Egypt, Jordan, Lebanon, Libya, Tunisia and the United Arab Emirates. They discussed a whole range of challenges to regional security in the wider Eastern Mediterranean region, including ways to meet and overcome these challenges – from the refugee/migration crisis to environmental issues and the threat of radicalisation – through political, economic and cultural synergies and initiatives that can effectively stabilise the region.

The Rhodes Conference initiative, launched by Minister of Foreign Affairs, Nikos Kotzias, paves the way for the establishment of an annual forum for dialogue, aiming to deepen cooperation among the key players in a region plagued by security challenges and destabilising forces on the premise that no single country can tackle the problems of this day and age.

This Conference stressed the need for collective action; as it is imperative to act together in order to safeguard security and stability for the entire region.

The cohesion and cooperation of regional states is vital to securing peace in the region, Minister Kotzias said on the first day of the security and stability conference. “We must do everything, our utmost, to have peace in the region,” adding that “peace requires stability.”

The Greek head of diplomacy said that the nations shared a “geographic continuum” where multiple problems and opportunities intersect. “The stability of each state in the region reflects on us all and the security of every one of us is inseparable from the security of the rest,” he stressed.

The ongoing refugee/migration crisis, extremism and radicalisation are indicators of the current critical situation in the broader region.

The Rhodes Conference is based on a political vision; to build stability and security via joint initiatives and synergies in order to avert fragmentation and bring prosperity and peace.

“We agreed to hold the conference every year and that it must be based on principles. The first principle is that we do not want intervention by third parties in the region. We can cooperate with and use help from third parties, but the region must develop its own internal relations, on the basis of trust and a positive agenda that will develop the networks and public goods in the region,” Minister Kotzias said in a press conference. 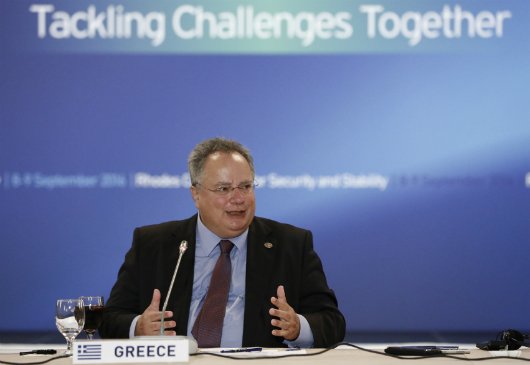 At a time of multiple and severe challenges to the security of the Eastern Mediterranean, participants recognised the need for enhanced constructive dialogue, constant cooperation and coordination among the countries of the broader region, including through the European Neighbourhood Policy (ENP) and the Union for the Mediterranean, on issues such as border security, trafficking, counter-terrorism, non-proliferation, water and food security, energy and climate, interconnectivity, infrastructure and disaster management. At the same time, the participants highlighted the importance of formats, such as the Rhodes Security and Stability Conference, in fostering dialogue, thus complementing and buttressing the aforementioned institutionalised forms of cooperation.

The field of education was acknowledged as a top priority sector. Participants agreed that enhanced cooperation, especially between universities and research centres should be sought, establishing a network of exchanging views and ideas and promoting contacts between youth and academia.

On Migration, the participants agreed that the current dramatic and unprecedented migration and refugee crisis calls for far-reaching measures. Therefore, cross-border cooperation on migration management coordination between the competent authorities, as well as implementation of joint projects and proposals will alleviate the countries and peoples in need. The participants also stressed the importance of adopting a comprehensive approach to deal with the grassroots of the migration issue and supporting the efforts to improve the living conditions in the South Mediterranean countries.

The participants have commended the courageous decisions of Lebanon, Egypt and Jordan to provide shelter to a huge number of refugees from Syria and Iraq and they reiterated their call to the international community to provide these countries with the necessary funds to enable them to cope with this disproportionate quota in comparison to their economic potential.

They also acknowledged the need to find solutions to challenges facing maritime security, including piracy, human trafficking, terrorism, weapons trafficking, overfishing, pollution and man-made and natural disasters, and to eliminate on-going threats to the region’s cultural and religious plurality, including the root causes of radicalisation and violent extremism. With regard to countering radicalisation, participants acknowledged that although security-oriented measures are necessary to prevent terrorist attacks and exert pressure on terrorist organisations, at the same time they cannot solve the problem at its root.

“Peace requires stability…
We must do everything, our utmost,
to have peace in the region.”

The participants, also acknowledging that in order to combat terrorism, focus should be given not only to security issues, but to the encountering of radicalisation, extremism and religious bigotry, agreeing to establish a committee which shall consist of representatives of the participant countries to explore and implement projects aimed at counter extremism in the Middle East North Africa and Europe, promoting peaceful coexistence tolerance, mutual understanding and cooperation among groups of different religions. This committee hereinafter is to be referred to as ‘The Rhodes Committee’ and it will encourage cooperation and joint projects promoting the values and principles of cultural and religious pluralism and mutual respect. It will pursue as its first tasks the following:

Finally, the participants, acknowledging the added value of a follow-up mechanism to the Rhodes Security and Stability Conference, agreed that the next meeting will convene in Rhodes in September 2017.