Visit of the Foreign Minister of Bosnia and Herzegovina 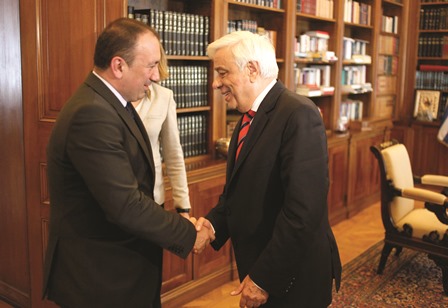 Foreign Minister of Bosnia and Herzegovina (BiH), Igor Crnadak has paid a visit to Athens during which time he held talks with Greek Foreign Minister Nikos Kotzias (pictured right), meeting also with the President of the Hellenic Republic Prokopis Pavlopoulos (pictured left) and Parliament President Nikos Voutsis (pictured centre). Talks were aimed at deeper bilateral cooperation in all areas, from political to commercial and cultural, with the two Ministers agreeing that the cooperation between BiH and Greece should be intensified in the upcoming period, with special emphasis on cooperation in the field of economy and foreign trade. 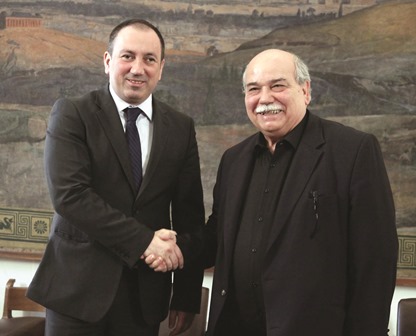 “Bosnia-Herzegovina is a positive example in our region and we must all support its path toward European structures,” he commented, joking that Bosnian structures were so complicated that they rivalled those of the European Union and that it should perhaps join for this reason alone. 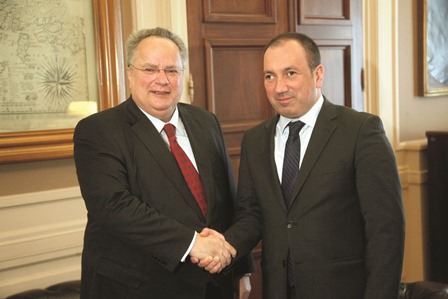 Minister Crnadak said Greece had given great support to the country’s application for EU membership, especially now that it hoped to become a candidate-country in 2017, and that efforts were continuing in the area of reforms and stabilisation, as well as to fight corruption.

Asked to comment on the policy of closing borders to refugees adopted by Balkan countries, he noted that “some countries reached the lowest level in their relations, given that some believed that they must gain something from this situation.”

The Greek Foreign Minister also announced plans for a meeting with high-ranking officials from Greece’s Balkan neighbours on the refugee crisis and renewed pressure from Austria for borders on the Balkan route into Northern Europe to remain closed. Speaking after their meeting, he said the meeting would be hosted in the northern Greek city of Thessaloniki, possibly after Easter in early May, and would include the participation of officials from Albania, Bulgaria and the Former Yugoslav Republic of Macedonia (FYROM).

Some Balkan countries that do not respect the principles of humanism and the rights of refugees cannot aspire to join the European Union or NATO, President Prokopis Pavlopoulos said as he welcomed the Foreign Minister of Bosnia and Herzegovina. “The refugee issue and managing it with humanism and respect of the rights of the people is a matter of principle for the European Union and of course Greece,” he said. “Therefore, countries in the Balkans that keep a stance which is against the principles of humanism… it is evident that, if they continue this tactic, they cannot consider a European path and NATO,” he added.

Speaking to Minister Crnadak, the Greek President said Greece seeks to have the best possible relations with all the Balkan countries and stated that it wants cooperation in all sectors. Concerning BiH’s path towards the EU, he referred to a meeting the visiting Minister had earlier with his Greek counterpart, when Minister Kotzias stated that the country is a positive example in the region and must be supported.

On his part, Minister Crnadak described the relations between the two countries as “excellent” and noted the two sides “agreed to deepen these good relations at a political, diplomatic, touristic and economic level.” He also expressed his satisfaction for Greece’s full support on political and diplomatic issues and generally on the issue of experts as his country strives towards inclusion in the European Union. Commenting on the refugee issue, he said that BiH is not part of the Balkan route, adding that “unfortunately, we have not seen a unified and strong response on this issue by Europe”.

During his meeting, Parliament President Voutsis confirmed the excellent relations between the two countries, discussing the possibilities of further enlargement in all areas.