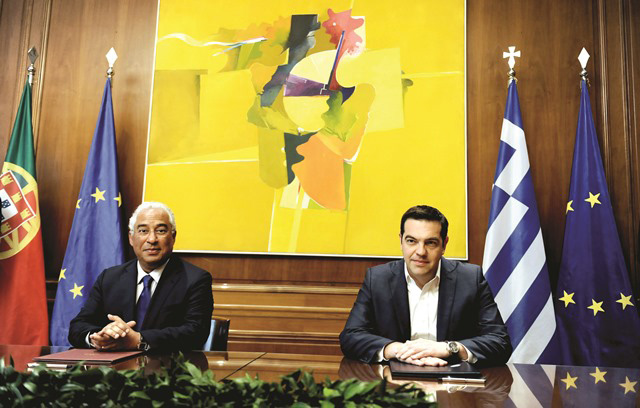 The first joint front against austerity policies and in favour of adopting alternative policies in the EU was formed by the Governments of Greece and Portugal following a joint admission by Prime Minister Alexis Tsipras and his Portuguese counterpart António Costa that the memorandums didn’t provide the solutions to the countries’ problems. The two leaders met in Athens to discuss economic, political and refugee issues, as well as the need to have more solidarity in the EU and form a wider front of progressive forces which will promote alternative policies in the region. 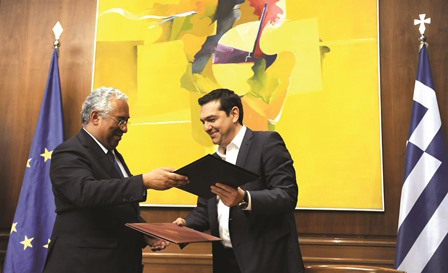 Speaking during a joint press conference after the two-and-a-half-hour meeting, Premier Tsipras asked for the July agreement on Greece’s economic programme to be implemented, warning that he will not accept conditions on starting a talk on debt relief, as the deal didn’t include any conditions. He said once talks on debt start, they will lead to some conclusion.

The Premier then continued by taking a jab at the International Monetary Fund (IMF), saying that despite admitting its mistake on the Greek programme, it insists on its mistake, but at some time “we must get serious.” He then said the Greek economy is outperforming its projected targets and insinuated that there might be some sides that do not want the first programme review to conclude, so as to avoid starting debt relief talks.

Commenting also on the economy, the Portuguese Prime Minister said the adjustment programme implemented in his country left behind serious problems, such as a jump in public debt from 97% of GDP to 130%, poverty, unemployment and social problems. 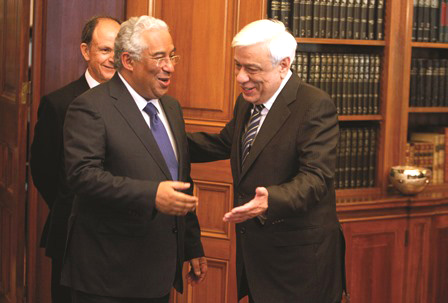 “We believe that the solution to the common concerns we face requires more Europe and not less Europe, and in that process there should be no ‘fronts’ of some countries against or in favour of others,” Premier Costa told Kathimerini daily ahead of a visit to Athens.

Answering questions on the refugee crisis, the Premier Costa said his country will welcome a significant number of refugees from Greece. Premier Tsipras publicly thanked him for the move and noted that Portugal, a country with a small population and economic problems is welcoming refugees, while other countries with better economies are refusing to take them in. Portugal has agreed to take in up to 10,000 refugees, more than double its quota of 4,500 under an EU scheme that has failed to make much progress in the bloc. Prime Minister Costa urged the EU to rise to the occasion and not allow the entire burden of the refugee crisis to fall on one country like Greece, because this is a European problem. “We do not have the refugee flow facing Greece, but every refugee who reaches Greece is a refugee that reaches Europe, and Portugal too, in our view,” he said. 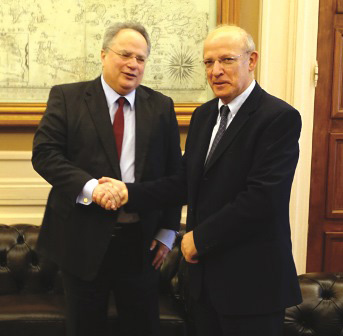 Commenting on the joint declaration signed by the two leaders, Prime Minister Tsipras emphasised the common targets highlighted for a change of policy in the EU and on the need to end austerity policies. The only divergence between the two countries, he noted, is on the issue of debt relief, with Portugal openly being against cutting it, while the Greek side believes it is unsustainable.

Asked about the incident in Idomeni when protesting refugees and migrants were pushed back by FYROM border police with teargas and rubber bullets, the Greek Prime Minister said that Idomeni is, and continues to constitute, an embarrassment for European culture, adding the cause of the situation in the makeshift camp is the unilateral actions of some countries who decided to close the borders. He then stressed that this is a situation that cannot be changed and that the Government is doing all it can to convince all these people that they have to move to organised facilities. Premier Tsipras also said that in this effort, apart from the objective difficulties, the Government has to deal with some NGOs which are doing the opposite job by trying to convince those people to remain there, regardless of the fact that this move poses enormous risks, as it appears that these NGOs are more concerned with receiving funding, rather than helping. Asked about the clashes in Idomeni, the Prime Minister said they constitute a “double provocation” because they were encouraged by some “solidarity volunteers,” representatives of NGOs, some of whom are foreign nationals and don’t live in the country. 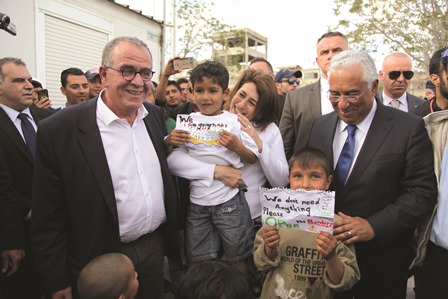 The second provocation, he said, is the stance of FYROM authorities, who responded with teargas and rubber bullets against people who were clearly unarmed, which constitutes a great shame for European civilization and for the countries who want to become part of this civilization. “I expect European authorities, international organisations and the UNCHR to say something on what happened yesterday,” he added.

During his short trip to the country, Prime Minister Costa also visited the Eleonas refugee camp in Athens. He was accompanied by Greek Alternate Minister of Migration Policy Yannis Mouzalas.