A Visit of Hope and Solidarity

Pope Francis’s joint visit to the refugees on Lesvos Island, on April 16th, with Ecumenical Patriarch Bartholomew and Archbishop of Athens and All Greece Ieronymos was a “historic meeting that sent out very strong, global messages”. 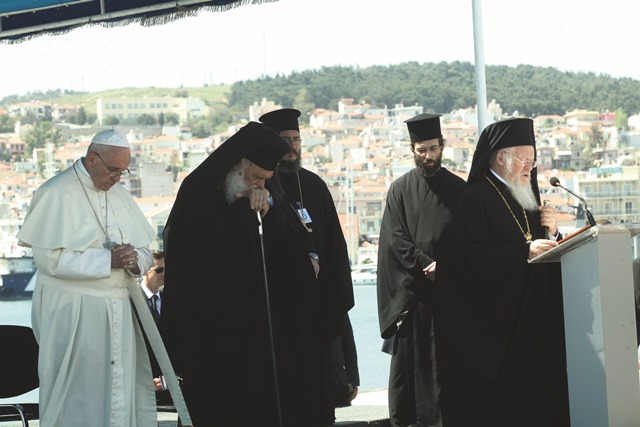 The three religious leaders greeted people staying at the Moria refugee centre in an emotional visit, during which some people broke down into tears as they spoke of their ordeals. They later sat for lunch with a small number of refugees. 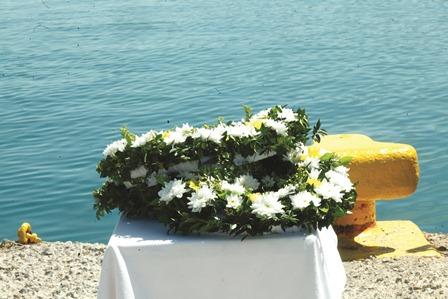 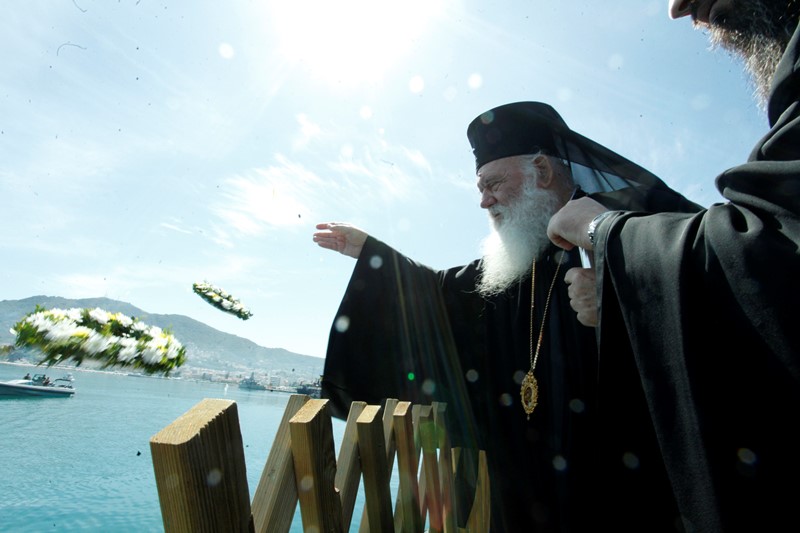 As part of the short visit, a memorial was also held to the victims of migration at the Lesvos’ Mytilene port.

Their Holinesses Francis, Bartholomew and Ieronymos all recited prayers as they threw wreaths into the water in memory of the victims who died at sea. According to figures from the UN’s refugee agency (UNHCR), so far this year 728 people have died or gone missing trying to reach Europe by sea.

Pope Francis also expressed “admiration” for dear Greek people that “who, despite their own great difficulties, have kept open their hearts and their doors. Many ordinary men and women have made available the little they have and shared it with those who have lost everything. God will repay this generosity and that of other surrounding nations, who, from the beginning, have welcomed with great openness the large numbers of people forced to migrate”. 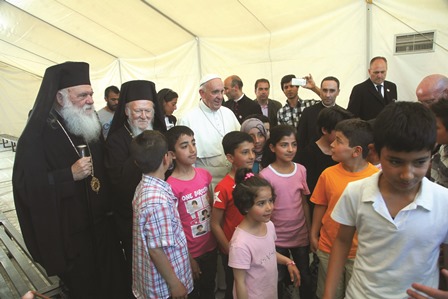 Today, the Pope said, “I renew my heartfelt plea for responsibility and solidarity in the face of this tragic situation. Many migrants who have come to this island and other places in Greece are living in trying conditions, in an atmosphere of anxiety and fear, at times even of despair, due to material hardship and uncertainty for the future”. The Pontiff continued, “The worries expressed by institutions and people, both in Greece and in other European countries, are understandable and legitimate. We must never forget, however, that migrants, rather than simply being a statistic, are first of all persons who have faces, names and individual stories. You, the residents of Lesvos, show that in these lands, the cradle of civilization, the heart of humanity continues to beat; a humanity that before all else recognises others as brothers and sisters, a humanity that wants to build bridges and recoils from the idea of putting up walls to make us feel safer. In reality, barriers create divisions instead of promoting the true progress of peoples, and divisions, sooner or later, lead to confrontations”. 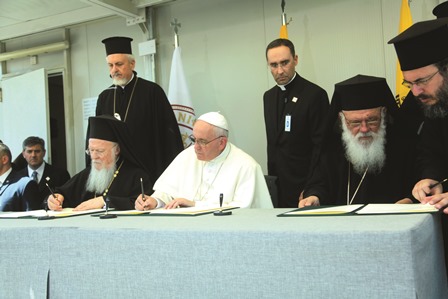 To be truly united with those forced to flee their homelands, he added, “we need to eliminate the causes of this dramatic situation: it is not enough to limit ourselves to responding to emergencies as they arise. Instead, we need to encourage political efforts that are broader in scope and multilateral. It is necessary, above all, to build peace where war has brought destruction and death and to stop this scourge from spreading. To do this, resolute efforts must be made to counter the arms trade and arms trafficking and the often hidden machinations associated with them; those who carry out acts of hatred and violence must be denied all means of support”.

All this “can be achieved only if we work together: solutions to the complex issue of refugees which are worthy of humanity can and must be sought. In this regard, the contribution of Churches and religious communities is indispensable. My presence here, along with that of Patriarch Bartholomew and Archbishop Hieronymus, is a sign of our willingness to continue to cooperate so that the challenges we face today will not lead to conflict, but rather to the growth of the civilization of love.” 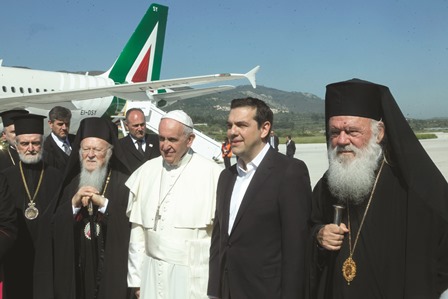 Finally, Pope Francis recalled that “Before the evil of this world, He made Himself our servant, and by His service of love, He saved the world. This is the true power that brings about peace. Only those who serve with love build peace. Service makes us go beyond ourselves and care for others. It does not stand by while people and things are destroyed, but rather it protects them; service overcomes that dense pall of indifference that clouds hearts and minds. Thank you, for you are guardians of humanity, for you care with tenderness for the body of Christ, who suffers in the least of his brothers and sisters, the hungry and the stranger, whom you have welcomed”.

The Pope’s speech mirrored a joint declaration signed with the two other religious leaders, in which they said the world could not ignore “the colossal humanitarian crisis.” “We have met on the Greek island of Lesvos to demonstrate our profound concern for the tragic situation of the numerous refugees, migrants and asylum seekers who have come to Europe fleeing from situations of conflict and, in many cases, daily threats to their survival,” it read.

Reminding his fellow Christians that they have a moral obligation to show hospitality to strangers, Ecumenical Patriarch Bartholomew said that Europeans should take inspiration from the generosity of Greeks confronted with a mass influx to their country. His All Holiness, the spiritual leader of the Eastern Orthodox Church – the second largest Christian denomination in the world – urged Europe to stop dividing economic migrants from asylum seekers. His remarks were published in an Italian newspaper a few days ahead of the trip to Lesvos where he accompanied the Head of the Roman Catholic Church. “This question (of refugees) puts me in mind of St Paul’s letter to the Hebrews in which he reminds us not to forget hospitality because those who offer it have sometimes hosted angels without knowing it,” Patriarch Bartholomew said. “Hospitality represents a concrete example of love for our neighbour and the way all Christians should live their lives.” 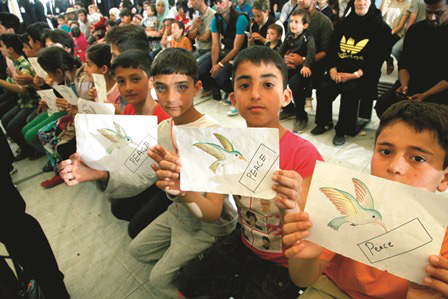 The Patriarch also said in the interview that this trip to Lesvos would “send a strong message in every direction”. “At this historic time and with the way the refugee crisis is developing, those people who can exercise influence have to work in this spirit,” the he stressed. Patriarch Bartholomew also criticised European policies that distinguish between economic and asylum-seeking refugees and migrants, saying that “The globalisation of the world economy has created a serious crisis of identity for the contemporary world, hunger and misery in many parts of our planet, and this offends God himself.”

The Vatican said that Pope Francis’ five-hour visit to Lesbos was purely humanitarian and religious in nature, not political and not meant as a criticism of the deportation programme. But the Pope’s Spokesman, Federico Lombardi, acknowledged that the Pontiff has previously told Europe it had a “moral obligation” to welcome refugees, and that it was “evident” that the humanitarian crisis in Europe only exists because political solutions to regional conflicts haven’t been found.

“Pope Francis has repeatedly referred to the ills of contemporary models of development and we share this point of view,” Ecumenical Patriarch Bartholomew said, adding, “the segregation of certain groups of people to the advantage of others does not reflect His desire and within this context we must seek new and fairer economic systems.”

Pictured from above: Their Holinesses Pope Francis, Ecumenical Patriarch Bartholomew and His Beatitude Archbishop of Athens and All Greece Ieronymos II deep in prayer as they remember the lost souls drowned in the Mediterranean Sea as they fled to find better lives for themselves and their loved ones; meeting with migrants and refugees at the Moria Refugee Centre on the island of Lesvos; children expressing their desire for peace; Premier Tsipras forms part of the welcoming delegation; the three religious leaders sign a joint declaration in which they said the world could not ignore “the colossal humanitarian crisis”.

Previous A flame is lit, a hope for peace is born
Next Prime Minister of Portugal pays Official Visit