Congratulations on the ‘historic agreement’ 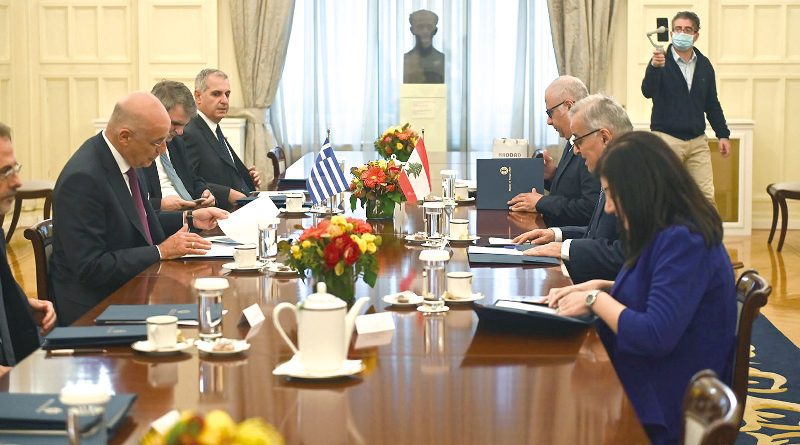 Minister Dendias in joint statements with Minister Habib said the agreement between Lebanon and Israel is an example and shows that the delimitation of maritime zones is possible in every case but with one key condition – respect for International Law. He reiterated that this agreement was an example of a peaceful settlement of differences and urged other countries to follow this example. “This development paves the way for the adaptation of the equivalent agreement between Lebanon and Cyprus, for which the deliberations have already began,” Minister Dendias underlined.

Addressing his Lebanese counterpart, the Greek Foreign Minister congratulated him for the ‘historic agreement’ on the delimitation of the maritime zones between Lebanon and Israel, which was brokered by the US, and he also pointed out that Greece was the first country to welcome this agreement as a key factor for the stabilisation of the situation in the Middle East.

Minister Dendias said that Greece is looking forward to the delimitation of the Exclusive Economic Zone with Libya when an elected government exists in that country. “This would create another triangle of stability: Greece, Egypt, Libya, in the Eastern Mediterranean. We would also wish for this example to extend to our neighbour Turkey. We hope to be in position, after the elections in Turkey, to negotiate with Turkey the only bilateral difference [between the two countries], always according to the International Law of the Sea”.

On Greek-Lebanese bilateral relations, Minister Dendias said that relations with Lebanon have always had a huge importance and he expressed the will for deeper cooperation, while he referred to the memoranda that they had just signed and offered assurances that Greece will continue to show solidarity with the people of Lebanon. He also underlined that Greece is looking forward to a trilateral meeting of the Foreign Ministers of Greece, Cyprus and Lebanon.

During their meeting, the two Ministers were also said to have discussed the challenges facing the international community in Europe, the Middle East, as well as the Russian invasion of Ukraine.

On his part, Minister Habib briefed Minister Dendias on the huge difficulties that Lebanon is facing due to the millions of displaced Syrians hosted in its territory. The two heads of diplomacy discussed in particular the need to deal with this phenomenon with the EU’s support.

The Greek Minister pledged to do whatever is possible so that the Lebanese Foreign Minister would be invited to a working breakfast with the EU Foreign Ministers, during which he will be able to clearly outline the challenges his country is facing, as well as the solutions that he proposes.

The visiting Foreign Minister spoke extensively about the refugee issue in Lebanon, with 2 million Syrian refugees in a country of 4 million and nearly 1 million Lebanese in the diaspora. His country subsidises basic goods like bread, he said, 40% of which is consumed by Syrian refugees. Living in Lebanon for the last 11 years since the war started in their country, they depend on funding from the UN’s High Commission for Refugees and from the European Union to remain in Lebanon, he said.