For centuries, the spirit of fighting for freedom has been uniting Greece and Lithuania

Minister of Foreign Affairs Nikos Dendias met with his Lithuanian counterpart Gabrielius Landsbergis in Athens on October 20th and condemned the emergence of revisionist ideologies in Europe. “We must stand opposed to any revisionist ideology that seeks to destroy everything the EU stands for,” said Minister Dendias after the meeting. Talks focused on strengthening bilateral cooperation and Greek-Lithuanian coordination in the EU and NATO.

The two Ministers also discussed the latest developments in the Eastern Mediterranean, with the Greek Foreign Minister briefing Minister Landsbergis on the “illegal” Memorandum of Understanding between the Tripoli government and Turkey. The Ministers also discussed the situation in Ukraine, with Minister Dendias sharing his experiences from his visit to Kyiv during which he was forced to shelter in a bomb refuge.

Minister Dendias also stressed that despite their geographical distance, Greece and Lithuania have much in common as both countries are on the periphery of the European Union and face many of the same challenges and problems.

Minister Landsbergis said that the international community needs to step up the efforts to deter Russia’s brutal aggression against Ukraine. “For the people of Greece, Mariupol and Kharkiv are not just the names of the cities on the map of Ukraine. It is a tragic symbol of brutality and grief – the Greek community there has suffered tragic losses and experienced barbaric atrocities, as well as all around Ukraine.

“The international community must continue to exert maximum pressure on Russia and its supporters and other authoritarian regimes, sending a clear message that the crimes of war and aggression, as well as aid to the aggressor, will receive a response,” Minister Landsbergis said after a meeting with the head of Greek diplomacy.

He also presented the initiative of Estonia, Latvia and Lithuania calling on the EU, together with international partners, to establish a Special Tribunal to prosecute the crime of aggression and so to fill in the legal loophole, thus ensuring Russia’s accountability for aggression against Ukraine and atrocities committed there. 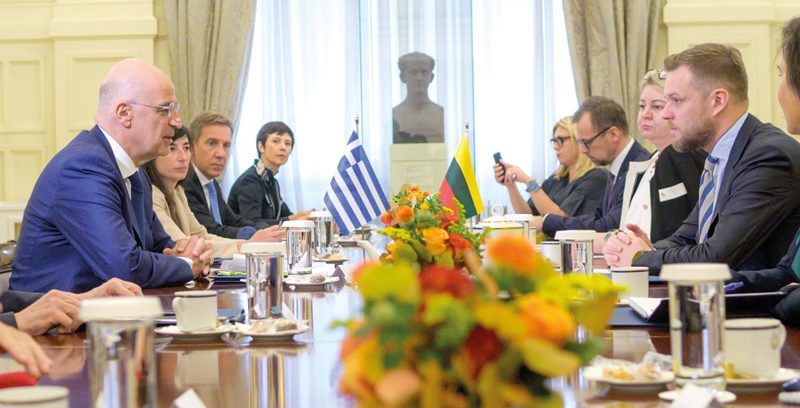 “For centuries, the spirit of fighting for freedom has been uniting Greece and Lithuania and strengthens a common European response to authoritarian regimes today. A Special Tribunal could become a pillar of the rules-based world order, as well as a deterrent to other regimes with revisionist aims,” he said.

The head of Lithuania’s diplomacy also held a meeting with the Chairman of the Standing Committee on National Defence and Foreign Affairs of the Hellenic Parliament, Konstantinos Gioulekas. They discussed closer bilateral cooperation between the Greek and Lithuanian Parliaments and agreed on joint consultations on international security issues.

Pictured above from left: visiting Foreign Minister of the Republic of Lithuania, Gabrielius Landsbergis, addresses a joint press conference in Athens with his Greek counterpart, Nikos Dendias. Below: the Greek and Lithuanian delegations in conference at the Hellenic Ministry of Foreign Affairs.