Greek Prime Minister Kyriakos Mitsotakis met with the Emir of Qatar, Sheikh Tamim bin Hamad Al-Thani, in Doha recently. Energy issues were said to have dominated talks during his first Official Visit to Qatar. The visit was indicative of the strong interest of both sides in further enhancing bilateral relations, especially during the current time of regional instability and energy crisis.

On the Greek side, Minister of the Environment and Energy Konstantinos Skrekas and a number of members of the accompanying official delegation attended the session.

During Greek Prime Minister’s meeting with the Emir of Qatar they ascertained a common intent to deepen cooperation in the energy sector, as well as in tourism, infrastructure, agriculture, culture, sports and science. 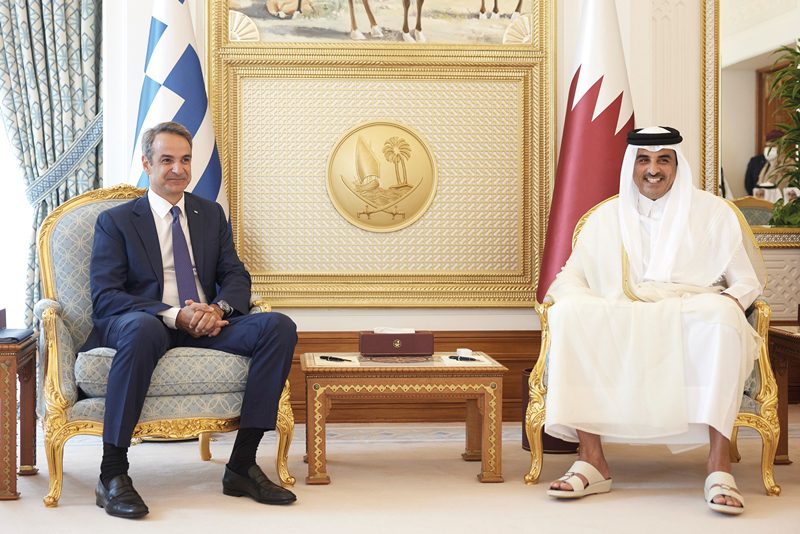 The two leaders also discussed current regional developments, with Premier Mitsotakis stressing that a climate of stability must prevail in the wider region with the avoidance of actions that undermined peace during the upheaval caused by the war in Ukraine. He also noted Qatar’s role in the Gulf region, which is crucial for Greek interests, following the adoption of the Al-Ula Declaration and Doha’s important role in managing crises, such as those in Chad, Palestine and Afghanistan.

The meeting focused particularly on energy and the potential for deeper and more systematic cooperation in the energy sector given Qatar’s leading role in the production of natural gas and the government’s strategy for the diversification of energy sources and ensuring energy security.

Premier Mitsotakis further noted that Greece, given its strategic position in the region and its infrastructure, could serve as a bridge between Qatar and Europe, as an entry point for energy to the European market, both via the Revythoussa station and via Alexandroupolis. He pointed out that Greece was a reliable partner and a pillar of stability in the region while informing the Emir that Greece officially graduated from the enhanced surveillance regime on August 20th. The Greek Premier also pointed to the many investment opportunities in the country.

Premier Mitsotakis congratulated the Emir on hosting the 2022 FIFA World Championship in Qatar in November. He wished him success and accepted an invitation to visit Qatar again during the championship competition.