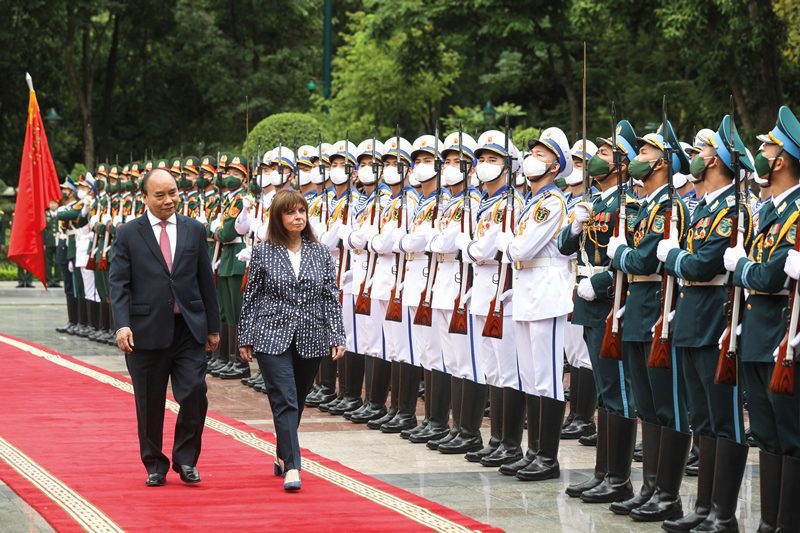 President of the Hellenic Republic, Katerina Sakellaropoulou, paid a State Visit to Vietnam from May 15th-19th at the invitation of the President the Socialist Republic of Vietnam, Nguyễn Xuân Phúc.

During the welcoming ceremony the Greek Head of State laid a wreath at the Heroes and Martyrs Monument and she also visited the Ho Chi Minh Mausoleum in Hanoi. This was followed by her visit to the Presidential Mansion, where talks were held between the two countries’ delegations.

President Sakellaropoulou said she hopes her presence in Vietnam “will give further impetus to bilateral relations and lead to more high-level talks, given that a long time has passed – nearly 14 years – since a President of the Hellenic Republic visited Vietnam.”

She also highlighted that both countries wish to expand their trading relations, especially after the EU-Vietnam Free Trade Agreement took effect in 2020.

President Phúc described his meeting with the Greek President as open, sincere and constructive and he noted that the two countries have enjoyed harmonious relations since they launched their diplomatic relations in 1975. President Sakellaropoulou’s visit signals a new phase in the friendship and collaboration of the two peoples he added. The two countries’ economic relations “are also excellent,” he added, “with trade volume in 2021 amounting to 500 mln dollars, an increase of 33% compared to 2020.”

“As an active and responsible member of the Association of Southeast Asian Nations (ASEAN), Vietnam always supports the strengthening of relations between ASEAN and the European Union and between ASEAN members and Greece,” he noted, while adding the importance of respecting the Law of the Sea (UNCLOS).

The Vietnamese President also thanked his Greek counterpart for the 250,000 coronavirus vaccines sent to the country in November 2021, an aid which President Sakellaropoulou told him was “a gesture of solidarity to the people of Vietnam.” 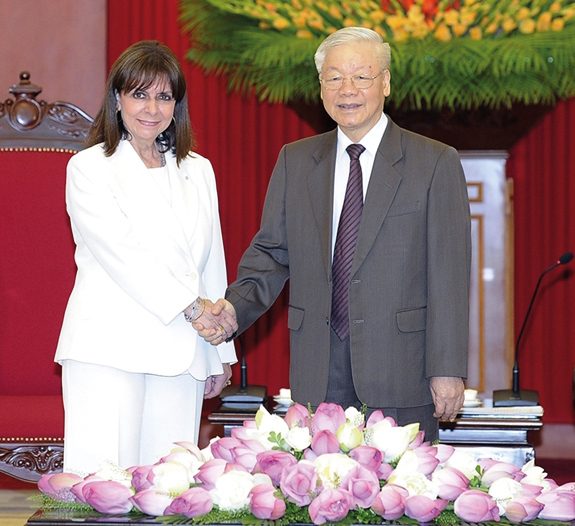 The Greek President then visited the Temple of Literature and also the headquarters of the Vietnamese Communist Party, where she met with the party’s General Secretary Nguyễn Phú Trọng. The Greek President was accompanied by Deputy Foreign Affairs Minister Andreas Katsaniotis.

Party Secretary General Trọng hosted a reception for visiting the visiting Head of State. The Vietnamese Party leader congratulated her on becoming the first female Greek President and thanked the Greek people for their valuable support for Vietnam’s struggle for independence in the past, as well as the current national construction, especially in Covid-19 prevention and control.

He highly valued the outcomes of the Greek leader’s visit, especially the results of the talks between President Sakellaropoulou and her Vietnamese counterpart Nguyễn Xuân Phúc. He expressed his belief that the visit is a milestone in the development of bilateral ties.

The party leader affirmed that Vietnam attaches much importance to its traditional friendship with Greece and is delighted at the important progress in bilateral ties. He gave a number of proposals to promote the partnership in all fields and suggested Greece continue to support the Vietnamese community in the country.

On her part, President Sakellaropoulou agreed with the Vietnamese Party leader’s proposals on orientations for the future development of bilateral ties and expressed her pleasure at the growth of cooperation between the two countries. She also underlined the potential of bilateral collaboration in all fields, including trade, shipbuilding, maritime transport and tourism. 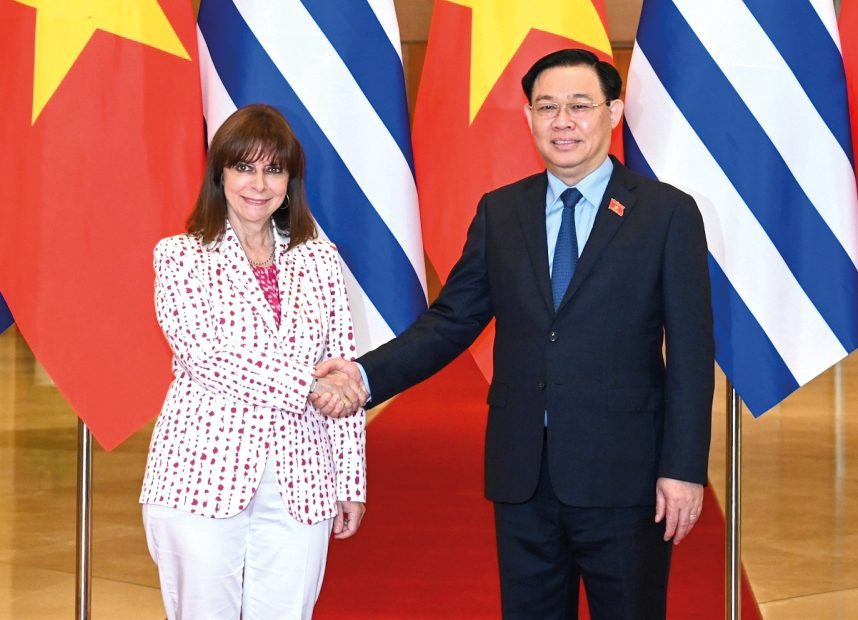 National Assembly Chairman Vương Đình Huệ also had a meeting with President Sakellaropoulou in Hanoi during which the Vietnamese top legislator expressed his delight at the growing friendship and all-round partnership between the two countries.

He proposed that the two countries continue to promote collaboration in areas of Greece’s strength and Vietnam’s demand such as maritime economy, shipbuilding, seaport and tourism, while working together to reach a double taxation avoidance agreement and another on maritime transportation to create favourable conditions for economic exchange and trade.

The National Assembly leader thanked the Hellenic Parliament for ratifying the EVFTA, suggesting that it hasten the act on the EU-Vietnam Investment Protection Agreement (EVIPA), as well as the removal of the “yellow card” on the Vietnamese fisheries sector.

The two sides should work closely together to optimise advantages from the two deals, protecting the legitimate interest of businesses of both countries during their investment and business activities in each other’s market, he said.

In turn, President Sakellaropoulou pointed to the potential for bilateral cooperation in history and culture. She agreed with the Vietnamese top legislator’s proposal to increase bilateral trade, saying her visit aims to further promote bilateral partnership and that the bilateral double taxation avoidance agreement and maritime transportation agreement will be signed soon.

Chairman Huệ expressed his hope that the Greek President supports the promotion of Parliamentary cooperation between the two countries in both bilateral frameworks and at multilateral Parliamentary forums. He thanked Greece and said he hopes that the country will continue to support the stance of ASEAN and Vietnam in the East Sea issue on the basis of respect to international law, as well as ASEAN-led mechanisms. 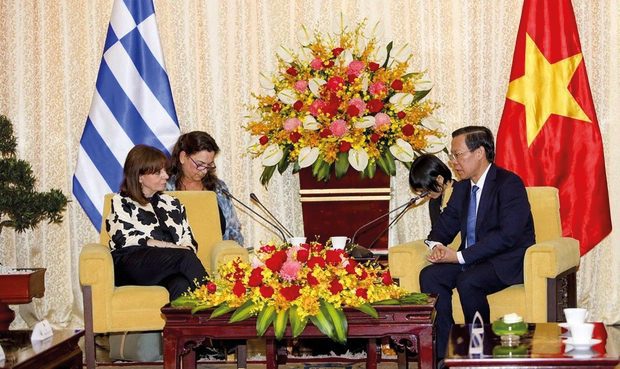 Chairman of the Ho Chi Minh City People’s Committee Phan Văn Mãi expressed the desire to further promote investment and trade between the two countries, both in general and with Ho Chi Minh City in particular. He was speaking at a reception that he hosted for the Greek Head of State and her entourage in the city on May 18th.

He further noted that the city hopes to receive the exchange of experience, technology transfer and cooperation from Greece in the fields of maritime and logistics, which are its strengths. It is ready to enhance collaboration in tourism development with Greece, as both sides boast potential and see great room for cooperation, he added.

As a socio-economic and cultural hub of the country, the city is willing to act as a bridge to bring cooperation between the two countries to a higher level, the city Chairman said, adding that it welcomes delegations of the Greek government, ministries, agencies, localities, as well as Greek businesses to exchange and seek opportunities for collaboration.

President Sakellaropoulou said it is necessary for Vietnam and Greece to further strengthen cooperation in the future, especially in areas where Greece has advantages such as education, cultural exchange, historical relic preservation amid climate change. She also mentioned the need to enhance trade and investment ties, because the free trade agreement between Vietnam and the EU will create an important foundation for deepening bilateral relations in the near future.

Appreciating the priority areas of cooperation that the city’s leaders have suggested, the Greek President said that she hopes that this visit will open more opportunities for collaboration between Greece and Vietnam, including with Ho Chi Minh City, especially in delegation exchange and economic cooperation.

(Photos: Th.Manolopoulos/Office to the President.)