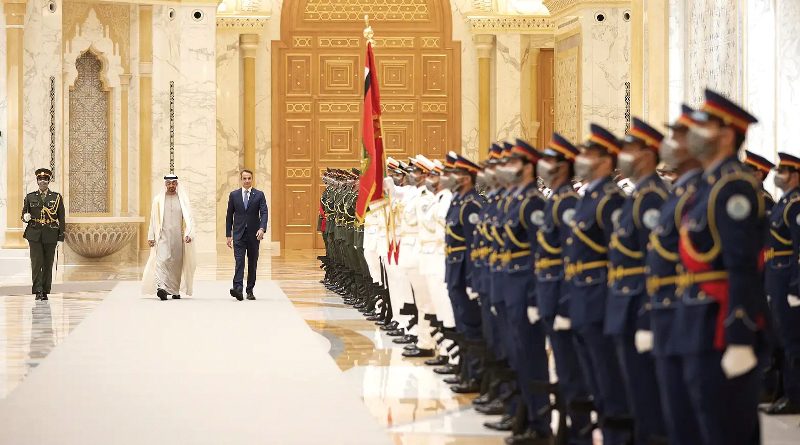 On May 9th, Prime Minister Kyriakos Mitsotakis paid his third Official Visit to the United Arab Emirates since 2020, which shows the will of the two countries to further strengthen their relations and strategic character.

The Prime Minister met with the successor to the throne of Abu Dhabi, his Highness Sheikh Mohamed bin Zayed Al Nahyan, the Crown Prince of Abu Dhabi and Deputy Supreme Commander of the UAE Armed Forces, with whom he discussed the prospects for further expansion of bilateral relations, while nine agreements were signed.

These are important agreements in the fields of investment, economic and technical cooperation, industry and advanced technologies, climate action, energy, health, police cooperation and standardisation. The meeting confirmed the strategic nature of relations between Greece and the United Arab Emirates.

Central to the development of economic relations is the renewal of the successful cooperation of the Hellenic Development Bank with the state investment fund Mubadala and the creation of a joint initiative to make investments in Greece amounting to € 4 billion, highlighting its attractiveness as a global investment destination.

“We are confident that this visit will strengthen the good relations that the two countries already have. The relations between our two countries, which began in 1976, are dynamic and evolving in all fields,” Prince Mohammed bin Zayed Al Nahyan told the Prime Minister.

He added: “The strategic agreement we signed in 2020 gave a great boost to these relations. As a result, our financial transactions increased by 76% and this is a result of the strategic agreement we signed. The Emirates seek to advance these relations at all levels, such as energy, technology, health, but also food security.” He also said that the United Arab Emirates is monitoring developments in Ukraine with great concern, because these developments have implications on many levels. “Our attitude from the beginning was to mediate and help on the humanitarian side. That is why the Emirates will offer humanitarian aid to citizens in need. We will give any help with the help of our friends like Greece. To mitigate all these effects at all levels.

“Because this crisis is affecting the energy sector, we always attach importance to energy security. We are interested in the stability of the energy market as we are also energy suppliers. Despite the crises in the Middle East and the Mediterranean region, the region has great potential for development and peaceful cooperation. The Emirates are working in this direction to prepare such conditions. To create partnerships with everyone, without exceptions,” he added.

He also stressed that the United Arab Emirates and Greece aim for peace and cooperation.

“I am really pleased to be with you today, as the head of a large delegation of ministers and government officials, on my third visit to the United Arab Emirates since taking office,” Premier Mitsotakis said. “And the close contacts between our two countries, at all levels, demonstrate – I believe – the excellent level of our bilateral relations and the understanding we have on a wide range of issues,” he underlined.

The Greek Premier also pointed out that “At the same time, we are demonstrating our common desire to give even greater depth to our truly strategic partnership. A strategic relationship that, as you said, was established in 2020, but today is gaining new momentum with the signing of a significant number of memoranda of understanding on a wide range of issues between the two countries. And this close relationship of ours is based above all on the fraternal relations between our two countries, on our common principles and values, especially on our unwavering commitment to the principles of International Law, as the only mechanism for resolving disputes and peaceful coexistence and cooperation between the peoples.”

He added: “On my part, I want to assure you that the further building of this partnership is a conscious, stable and long-term choice. After all, our relationship is inextricably linked to the wider interests of the European Union in the region. And you spoke at length to the importance we all attach to, as a result of the invasion of Ukraine, energy issues. And in this area, we can further strengthen our cooperation.”

Prime Minister Mitsotakis underlined that Greece has the potential due to its geographical location to become a gateway for natural gas from the Middle East and from the southeastern Mediterranean to Europe.

“Significant investments are being made in this direction and we would like to explore further the possibility of strategic cooperation and participation of funds from the United Arab Emirates in this direction. At the same time, Greece is reactivating its own exploration programme to find natural gas within Greek territory. And this is a perspective that may create opportunities for further strategic cooperation. I know your personal interest in the future of energy, in renewable energy sources. In issues such as offshore wind farms, we are ready to move rapidly in order to build strategic partnerships to exploit this very important source of wealth for our country,” he said.

Consequently, “the range of our cooperation can become wider and deeper. And in your image, I see a steadfast and faithful friend of my country. And I want to thank you for the warm welcome to me and my delegation. I also want to reassure you that Greece will be on the side of the United Arab Emirates, when they feel that their own strategic interests are threatened.”

Regarding Yemen, Premier Mitsotakis said that Greece unequivocally condemned the attacks against the UAE and the unacceptable targeting of innocent civilians and infrastructure. “Again, I want to thank you my friend for your warm welcome. To renew my invitation to visit Greece, as due to my illness from Covid we had to postpone your scheduled visit. I hope that soon you will be given the opportunity to also visit my island, Crete, to renew once again these strong bonds of friendship that we are building between us,” the Prime Minister underlined.

Greek Minister of Development and Investments Adonis Georgiadis signed a Memorandum of Understanding (MoU) with United Arab Emirates Minister of Industry and Advanced Technology Sultan Ahmed Al Jaber within the context of the Prime Minister’s official visit to the UAE.

With these agreements “the great impetus for investments from the United Arab Emirates to Greece, as well as the expansion of our trade relations, will proceed with even greater speed. With the agreement of the Hellenic Development Bank with both Mubadala Investment Company and ADQ, we ensure the significant flow of direct financing to investment funds and investment schemes from the UAE in Greece,” he noted.

ADNOC (Abu Dhabi’s National Oil Company) and Motor Oil signed a strategic framework agreement to explore opportunities for the supply of LNG to Greece, including the future offshore LNG storage facility and the FSRU unit of Dioriga Gas, along with exploring other opportunities for cooperation in the Dioriga Gas terminal station.

Motor Oil also signed a MoU with Abu Dhabi Future Energy Company (Masdar) over the possible development of offshore wind parks and other projects of renewable energy sources in Greece.

The large list of agreements and MoUs signed during the visit included the fields of investment, renewables, healthcare, advanced industries and technology and other vital sectors. 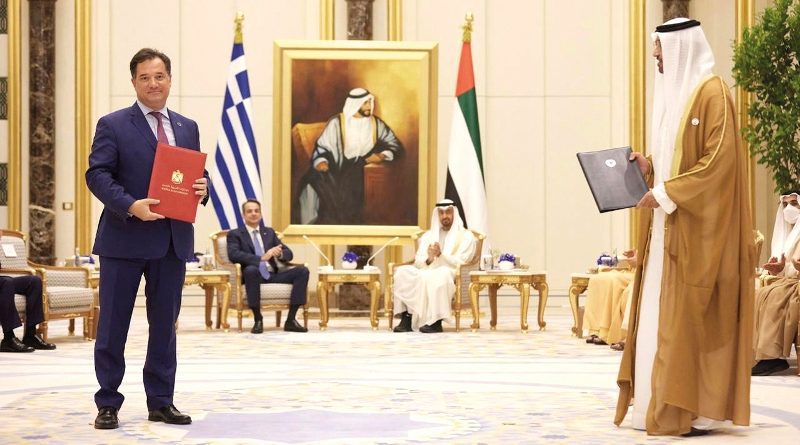 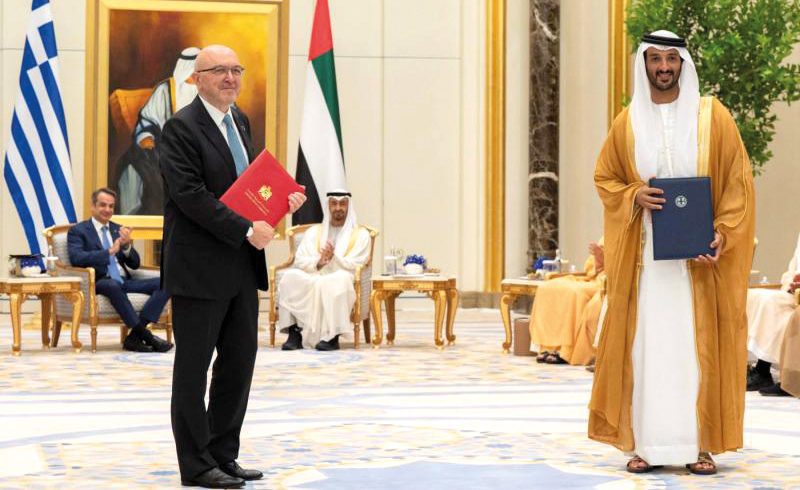