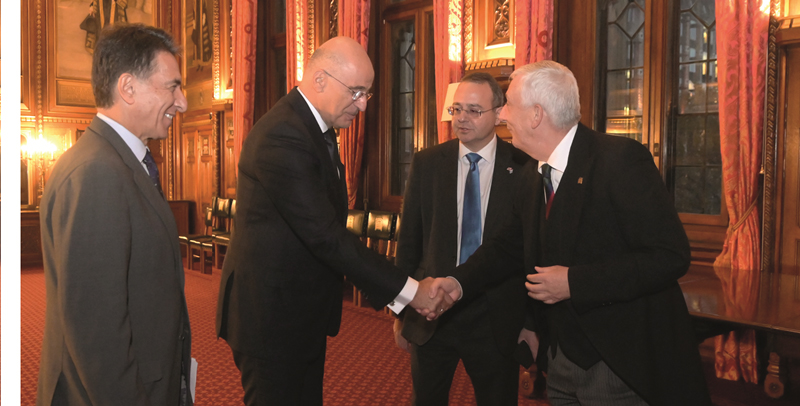 Foreign Minister Nikos Dendias co-signed a bilateral cooperation agreement with his British counterpart, Secretary of State for Foreign, Commonwealth and Development Affairs, Liz Truss, in London recently, which covered a wide range of sectors including defence and foreign policy. “The agreement is not purely on defence as the agreements with France, the USA and the UAE, but a strategic bilateral framework agreement which will allow for the deepening of Greek relations with a country with which we have long and traditional ties of friendship,” Minister Dendias said.

Focusing on the agreement with the UK, “a country which played a key role in the Greek Independence, a country with which we fought side by side in two World Wars, a nuclear force and permanent Member of the UN Security Council and guarantor force in Cyprus,” the Greek Foreign Minister underlined that “we are laying the foundation for the strengthening of this relationship in a new framework after their withdrawal from the EU.”

“We will conclude other agreements with the main guideline the protection of our national interests within the context of mutual understanding and respect between our countries, always based on International Law and good neighbourly relations,” stated Minister Dendias, adding that “after all, the protection of our national interests and the broadening of cooperation and alliances was, and continues to be, the main axis of Greece’s foreign policy.”

On her part Foreign Secretary Liz Truss said: “The framework we’ve signed with Greece will open up new opportunities for trade and investment in both countries, enabling better cooperation between businesses, investors and industry and builds on strong security and defence cooperation as we seek to challenge malign actors that threaten to disrupt our freedoms and way of life. The UK-Greece Strategic Bilateral Framework will build on the strong existing relationship between the UK and Greece. The two countries are committed to working together to promote stability and security as NATO allies and to enhance Europe’s resilience in the face of security threats from malign actors. The framework will enable individual deals to be done across a range of sectors including foreign policy, defence, trade and investment, health, education, tourism and maritime affairs. 2021 marks 200 years since Britain played an influential role in Greece’s struggle for independence.”

Earlier, Minister Dendias also met the Minister for Europe and Americas at the Foreign, Commonwealth and Development Office, Wendy Morton, with whom he had a “timely discussion on recent developments regarding the Cyprus issue and the Eastern Mediterranean region,” tweeted the Greek Foreign Ministry.

In addition, as part of the strengthening of Parliamentary cooperation between the two countries, the Minister of Foreign Affairs held meetings with the UK Parliament Chair of the Foreign Affairs Committee, Tom Tugendhat and the Chair of the Defence Committee, Tobias Ellwood. He also made an address at the event ‘Enhancing Security and Stability in Europe and the Mediterranean’ organised by the Royal United Services Institute, where he used to be a post-graduate student.

The Minister’s visit to London was the second one within a few months, a fact which underlines the special importance that Greece attaches to the strengthening of traditional ties with the United Kingdom in the post-Brexit era.