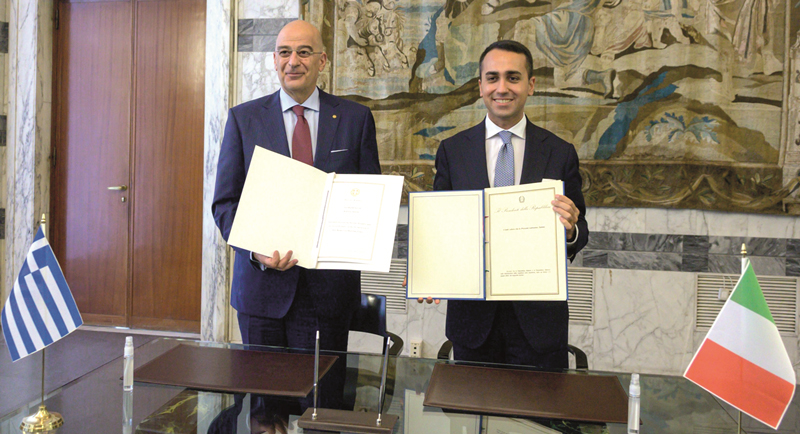 “European solidarity is something absolutely essential”

Minister of Foreign Affairs Nikos Dendias travelled to Rome and the Vatican on November 8th-9th. The Greek Foreign Minister met his Italian counterpart Luigi Di Maio in Rome for ratification of the Agreement between the two countries on the delimitation of their respective maritime zones.

In joint statements afterwards, Minister Dendias noted that this exchange of instruments was “a very happy event” as it allows for the implementation of the agreement to begin:

“This symbolic act is exceptionally significant. It concludes an issue that had been outstanding for 45 years and demonstrates our exemplary relations with Italy, both within the EU… and on a bilateral level. We have close ties that cover the entire range: trade, investments, as Italy has one of the most important positions in the Greek market. We have achieved a great deal, but we can achieve even more, in sectors such as tourism, culture and education where we work together closely.”

The Minister noted that cooperation between Greece and Italy was “not news” but “what ought to happen between two neighbouring friendly countries,” and that this exchange of instruments also demonstrated the two countries’ respect for International Law, especially the United Nations Convention on the Law of the Sea (UNCLOS).

“It is our common intent that all Mediterranean countries embrace these values, the dedication to International Law and UNCLOS. This would contribute to international stability and Greece is always open to boosting multilateral cooperation on this basis. Unfortunately, we are still far from realising this prospect,” Minister Dendias said.

Commenting on Turkey’s actions and provocativeness, Minister Dendias said that he had informed his Italian counterpart that Turkey was continuing its unlawful actions in the Eastern Mediterranean and flouting fundamental principles of International Law. “It is continuing to make threats against Greece. The casus belli, the threat of war against Greece continues to apply for Turkey. It is the only country in the world that has issued a threat of war against another country. It also issues threats against the Cyprus Republic. This is not something that concerns Greece and Cyprus only but the European Union family as a whole, including Italy,” Minister Dendias added.

The Greek Minister outlined the other issues discussed during the meeting with his Italian counterpart, saying that they included events in Libya, the Western Balkans and the challenges facing Europe, such as migration.

They also discussed the climate crisis and the need to change the energy mix in order to meet Europe’s energy supply needs until the green transition is completed. “Generally, we agreed that European solidarity is something absolutely essential,” Greek Minister said.

Minister Dendias said that he had stressed the need for the Paris Summit on Libya, which Italy co-chairs, to send a clear message that foreign troops and mercenaries must depart and about the holding of elections.

He also noted that recent developments in the Western Balkans “are not encouraging” and that they agreed that the EU must clearly support the European perspective of the region, always in accordance with the known conditions. He said that Greece unequivocally supports the start of accession talks with Albania and North Macedonia, urging governments in those countries to “avoid the sirens of nationalism”.

Minister Dendias said that Greece and Italy will work even more closely to stop migration, while emphasising that it is a European problem that requires a common EU solution.

Italian Foreign Minister Luigi Di Maio expressed his pleasure at Minister Dendias’ visit to Italy: “The bilateral visits and close contacts are proving the strong friendship and fruitful cooperation between our countries, which have excellent relations and close collaboration regarding the international dossiers, starting from the European agenda”. Minister Di Maio said that he and his Greek counterpart discussed a series of issues, from their relations with the neighbouring southern countries, economic matters and energy issues.

“I want to start with the ceremony for the exchange of the Instruments for the Delimitation of the Maritime Zones Agreement. An act that signals the start of its effect at an international level. It is a major success for both countries and very important for cooperation in the Mediterranean, which we wish to become an example and a point of reference for the future. Only with constant and constructive dialogue between all the countries of the area, something that Italy will continue to encourage, can stability in the Eastern Mediterranean be achieved,” he said.

In other issues, Minister Di Maio said that he reiterated to Minister Dendias the importance of supporting the political process in Libya and the immediate withdrawal of mercenary troops and foreign fighters. 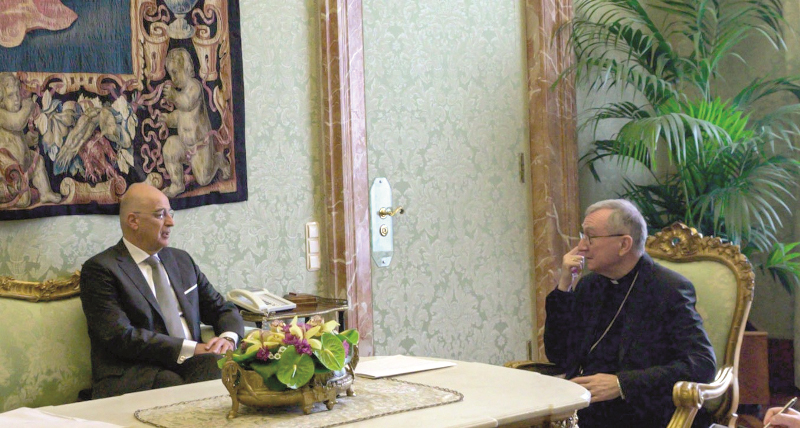 On November 9th, the Greek Foreign Minister visited the Sapienza University of Rome where he addressed the opening of the International Conference themed: ‘The Italian Philhellenic Movement and the Greek War of Independence’.

During the talks, the strengthening of bilateral relations in all areas, cooperation within the European Union and regional challenges were discussed, among other topics.

Afterwards, the Minister visited the headquarters of the World Food Programme, where he held a meeting with Deputy Executive Director, Amir Mahmoud Abdulla.

In the course of his visit to the Vatican, Minister Dendias was received by Cardinal Pietro Parolin, Secretary of State (Prime Minister) of the Holy See, with whom he discussed the preparation of Pope Francis’ visit to Greece. And he had the opportunity to review the conditions in the wider region of Eastern Mediterranean and the Western Balkans, areas of interest to the Holy See. 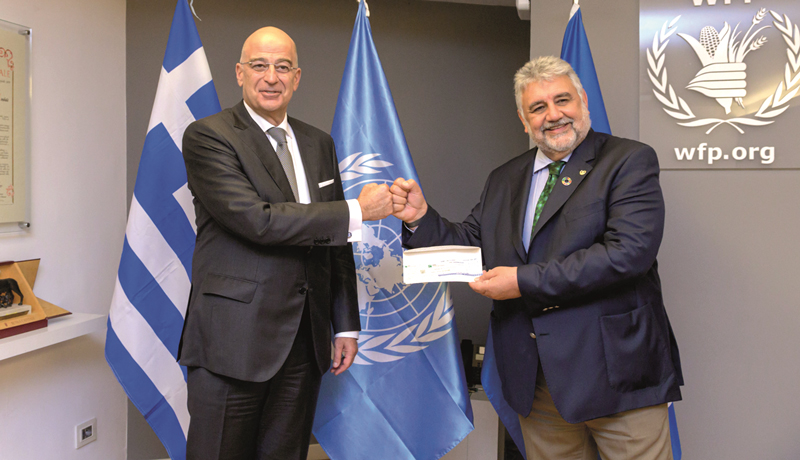 During the same visit, he inaugurated an Exhibition of Greek Art, organised by the Embassy of Greece to the Holy See, entitled ‘Community of People – the representation of the human form, from the post-Byzantine era to contemporary Greek painting’; the exhibition contains 66 works from the National Gallery of Art/Alexander Soutzos Museum in Athens, other Greek museums, private collections and foundations.

“This year, two landmark events coincide,” Minister Dendias said, “the centennial of the Greek Revolution, and the 40th-plus Anniversary of Diplomatic Relations between Greece and the Holy See (1980).” This, he noted, was an opportunity for the first exhibit of National Gallery works in the Holy See and it opens one month before the expected visit of Pope Francis to Greece. “Europe is called on to make difficult decisions that should focus on solidarity and humanity,” the Greek Minister said, adding that Greece and the Holy See should collaborate on protecting Christian populations in risky areas and monuments of global cultural and Christian heritage.

Later the same day, the Greek Foreign Minister attended a working dinner with representatives of Italian businesses active in Greece.

Pictured above: The Ministers of Foreign Affairs of Greece, Nikos Dendias and of Italy, Luigi Di Maio, with the newly-ratified Agreement; Minister Dendias with Secretary of State of the Holy See, Cardinal Pietro Parolin; WFP Deputy Executive Director, Amir Mahmoud Abdulla; with representatives of Italian businesses active in Greece and Ambassadors Patrizia Falcinetti and Theodoros Passas; inaugurating an Exhibition of Greek Art at the Vatican.