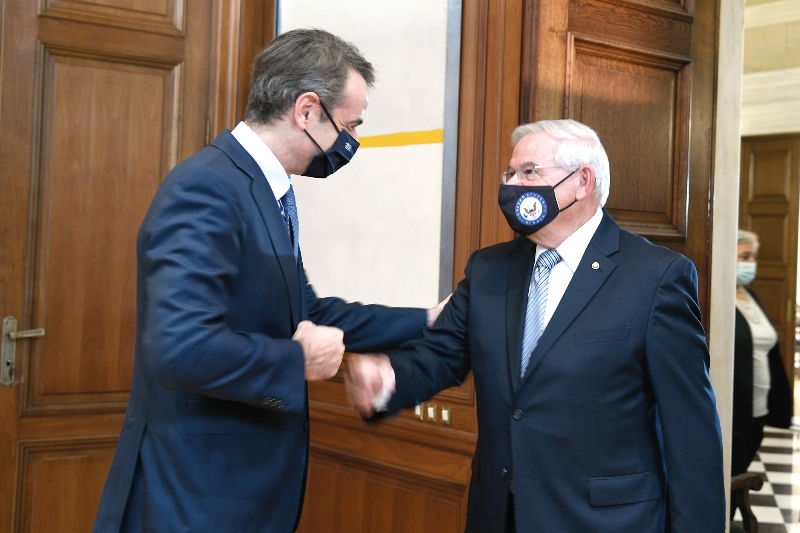 Marking the strategic nature of Greek-American relations, the deepening of Greek-US defence cooperation and the role of Greece as a pillar of stability and peace in the wider region through the new architecture of alliances. 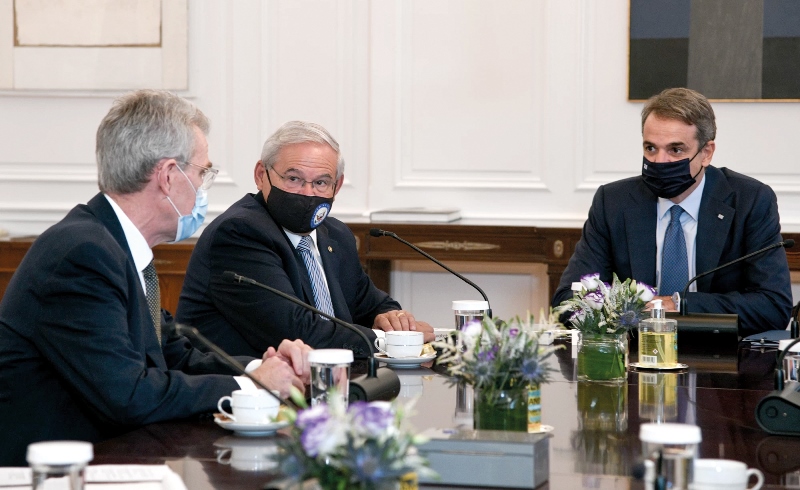 US Senator Bob Menendez (D-NJ), Chairman of the Senate Foreign Relations Committee, recently travelled to the Eastern Mediterranean to assess and advance the partnerships among the United States, Greece and Cyprus. Chairman Menendez has been a consistent supporter of Greek positions and with his fellow Senator Marco Rubio (R-FL) initiated the East Med Act, which promotes US relations with reliable partners in the region including Greece, Cyprus and Israel.

The bipartisan Eastern Mediterranean Security and Energy Partnership Act, introduced by Senators Menendez and Rubio and signed into Law on December 20th 2020, is a comprehensive bill that recognises the vital importance of Greece and Cyprus in the region.

The visit of Senator Robert Menendez marks the strategic nature of Greek-American relations, the deepening of Greek-US defence cooperation and the role of Greece as a pillar of stability and peace in the wider region through the new architecture of alliances in which Greece participates.

Senator Menendez was invited to be the keynote speaker at the ‘Greece in 2040’ event organised by the ‘Greece 2021’ Committee on August 26th.  The event took place at the Acropolis Museum with a group of high-level dignitaries.  The ceremony marked the first in a series of events organised by the Government of Greece in celebration of the Bicentennial Anniversary of the Greek Revolution of 1821. 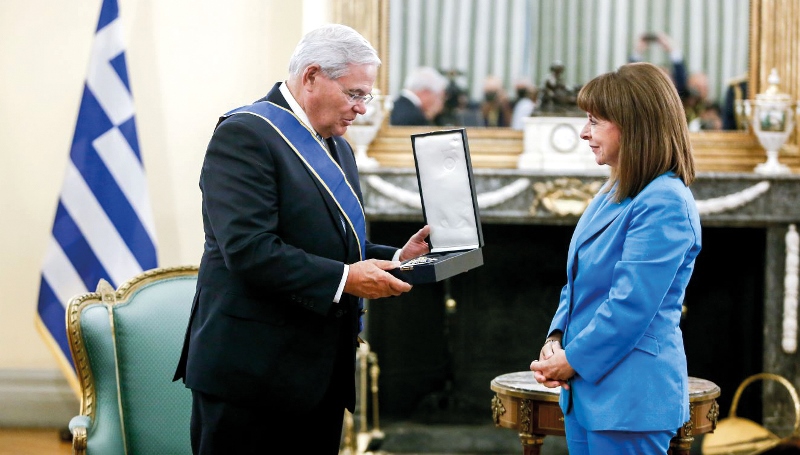 “It is up to us, and free people around the world, to keep alive the flame of democracy lit by Ancient Greece millennia ago,” said Chairman Menendez, laying out his vision for the future of the US-Greece relationship grounded in working together to face the rise in anti-democratic movements, including the geostrategic challenges. “At a time like this, going it alone will never do. Because only together can we turn a time of great peril into a time of great promise, both for the Hellenic Republic and the partnership between our nations.”

Senator Menendez underlined Greece’s long-standing relations with the US, while noting that Greece plays a leading role in the region, promoting peace and stability in the Balkans and the Eastern Mediterranean. The US Senator also stressed that Greece has a bright future and is an ideal partner for the US.

“Greece and Cyprus are linchpins of democracy in the Eastern Mediterranean,” he said, adding that the US will leverage the tripartite partnership of these two countries with Israel.

He asserted he is as committed to championing the tripartite partnership as he is to the completion of the US-Greece Defence Partnership Act of 2021. 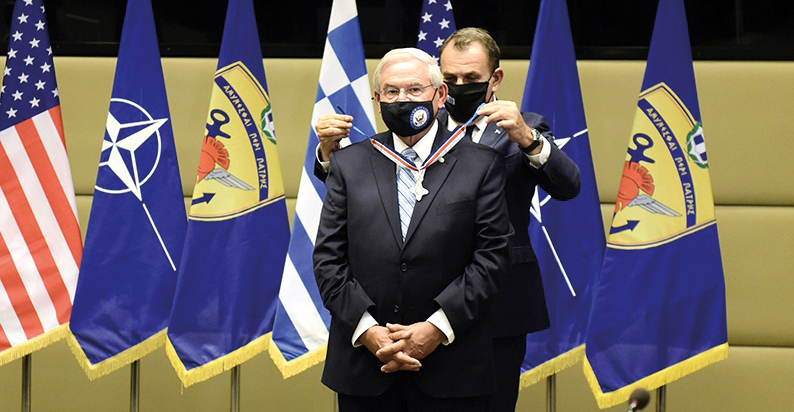 The American Senator noted that Greece played an important role in the first steps of the establishment of democracy in the USA, emphasising that the ideas of the Ancient Greek sages for democracy and the Rule of Law inspired the leaders of the American Revolution to proceed with the Declaration of Independence.

Greece’s struggle for independence has won the admiration of the Americans who were watching the heroic efforts of the Greeks he said, noting that the author of the American Declaration of Independence, Thomas Jefferson, sent a letter to Adamantios Korais expressing his solidarity with the Greek people.

Senator Menendez also referred to the American philhellenes who travelled to Greece in order to contribute to the winning of its freedom. “Greek independence is an important achievement, a true example of the story of David and Goliath, and I am glad that these Americans were able to play a small role,” he said, adding that the United States continues to stand by Greece. 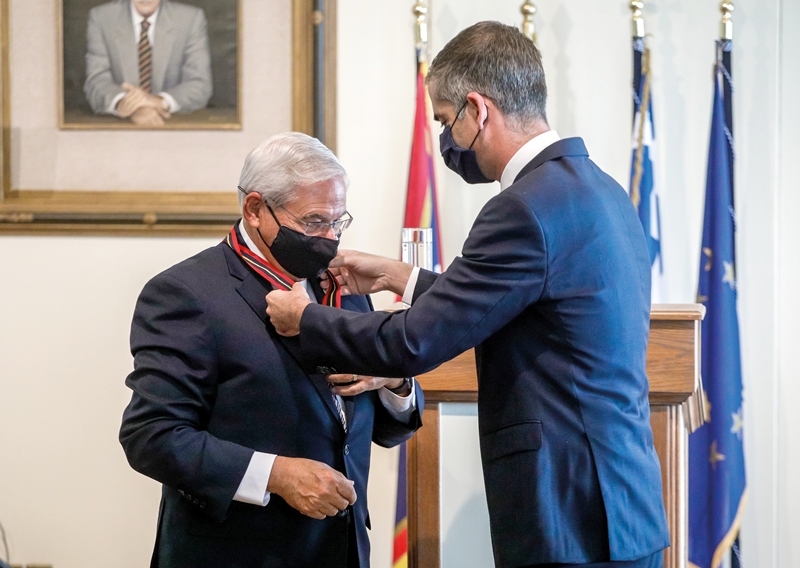 Referring to Turkey, US Senate Foreign Relations Committee Chairman stressed that he hopes it will be a democratic and constructive partner which respects its NATO commitments and the commitments it has made with its neighbours in the region. The United States wants to support efforts in the region to improve relations and ease tensions, “but we cannot remain silent when Turkey’s behaviour escalates tensions.”

Chairman Menendez has also recently blasted Turkey on human rights and its provocative stance in Cyprus. He strongly criticised President Erdogan, saying that his “goal is to advance a separate state on the island of Cyprus.” Commenting on Turkey’s disregard for International Law by opening of the seaside town of Varosha, he said that “this violation of International Law is unacceptable.”

Chairman Menendez also met with Greece’s Prime Minister Kyriakos Mitsotakis and President Katerina Sakellaropoulou to discuss the bilateral relationship. President Sakellaropoulou hosted a decoration ceremony in the Presidential Palace to bestow on the Senator the ‘Grand Cross and the Star of the Order of Honour’ for his decades-long efforts to strengthen the United States’ support for the Greek people and for our countries’ enduring partnership.

In Cyprus, the US Senator met with President Nikos Anastasiades to discuss continued efforts to foster peace, stability and security in the Eastern Mediterranean, as well as the importance of the US-Cyprus relationship to promote shared values and principles of democracy, Rule of Law and human rights. President Anastasiades awarded the Senator with the ‘Grand Cross of the Order of Makarios III’, the country’s highest civilian distinction.

“I am deeply honoured and grateful to be accorded these wonderful honours by the Governments of Greece and Cyprus. My commitment to the United States’ relationship with these close allies is deep. It is long standing. And it will endure as long as I am a United States Senator and beyond,” added Chairman Menendez.

While in Athens, Chairman Menendez also met with Greece’s Foreign Minister Nikos Dendias, Defence Minister Nikos Panagiotopoulos, Minister for Development and Investment Adonis Georgiadis, Parliament Speaker Konstantinos Tasoulas and Athens Mayor Kostas Bakoyannis.  His meetings focused on the security issues in the region, geopolitical challenges posed by China and Russia, the implications of the US withdrawal from Afghanistan and the common threat of climate change as the Hellenic Republic and the US confront devastating wildfires. The Senator also received the ‘Star of Merit and Honour’ by the Ministry of Defence and the ‘Medal of City of Athens’ by City Hall for his contribution to the strengthening of US-Greece relations. 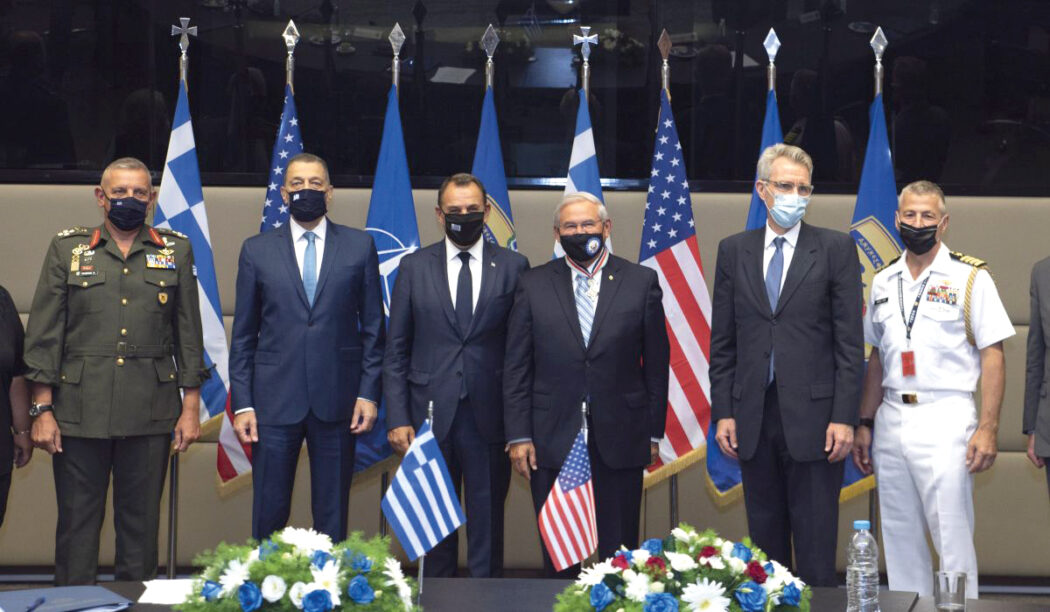 Relations between Greece and the United States are “going from strength to strength on all fronts: security, defence, geopolitics and economics.”

Regional and international issues of mutual interest, particularly in the Eastern Mediterranean, Middle East and Afghanistan were discussed during a meeting between Prime Minister Kyriakos Mitsotakis and visiting US Senators Chris Murphy and Jon Ossoff on September 6th.

Greeting the two Senators, Premier Mitsotakis commented that relations between Greece and the United States were “going from strength to strength on all fronts: security, defence, geopolitics and economics.”

According to Government sources, the meeting reaffirmed the excellent level of bilateral relations between Athens and Washington and explored the possibilities for their further deepening and expansion in areas such as defence cooperation, investments in strategic infrastructure and cooperation in the energy and environment sectors. They also discussed the Government’s planned reforms of the Greek State and economy.

Premier Mitsotakis outlined the recent developments in the Eastern Mediterranean and analysed Greece’s role as a pillar of stability and security in the wider region, via cooperation schemes with joint partners, such as Cyprus, Israel and Egypt. Regarding Afghanistan, the Prime Minister stressed that those fleeing the country should stay as close to their homes as possible.

The meeting also addressed the progress of the US-Greece Defence and Interparliamentary Partnership Act that is currently in Congress, which will strengthen Greek-US cooperation even further. It also examined the changes in the US-Greece Mutual Defence Cooperation Agreement that are currently being negotiated.

The Eastern Mediterranean, the Western Balkans and the Greece-US defence cooperation agreement were the focus of Foreign Minister Nikos Dendias’ meeting with US Senators Chris Murphy and Jon Ossoff.

“We see your presence here as an indication of the enormous importance that the United States attaches to Greece and the wider region,” Minister Dendias said in a statement during the meeting. He also reminded that their visit followed the visit of the Chair of the US Senate Foreign Relations Committee, Robert Menendez, to Athens. “Your visit comes at a very important time for the region and for Greek-US relations, our strategic bilateral cooperation,” he stressed. “We are very close to concluding the negotiations on the mutual defence cooperation agreement, which I estimate we will sign during my upcoming visit to Washington in October,” he said.

As he pointed out, the two sides had the opportunity to discuss developments in the region and the situation in the Mediterranean and to exchange views on the future.

Previous Minister of Foreign Affairs in Skopje
Next EUMED9 Summit: Challenges in the Mediterranean & climate change