Foreign Affairs Minister Nikos Dendias met with his visiting Libyan counterpart Najlah Al-Mangoush in Athens on September 6th. In joint statements after the meeting, the Greek Minister stressed the need to withdraw all foreign troops and all paramilitary and mercenary forces from Libya and have no foreign military presence in order to soon hold fair elections in the country.

The Head of Greek Diplomacy reiterated that Greece is not attempting, unlike other countries in the region, to turn back time and make Libya a de facto colony of foreign interests. “Greece doesn’t seek anything that will not be accepted and supported by the Libyan people, by Libyan society. Greece doesn’t seek to impose any illegal agreement on Libya, any agreement that the Libyan House of Representatives itself has rejected,” the Foreign Minister said.

“We are interested in the stabilisation, growth and prosperity of your country. We want Libya to participate in the new architecture for an understanding of stability and security that our region needs. Geographically speaking, we are immediate neighbours. Crete is a 20 minutes flight from Libya and the stabilisation of Libya, stability in Libya, affects our whole region,” Minister Dendias added.

“The most important issue at stake for us is to ensure the independence, the sovereignty and the territorial integrity of Libya,” he underlined, before noting that a key condition for this is holding fair elections on December 24th, as provided for in UN Resolutions. 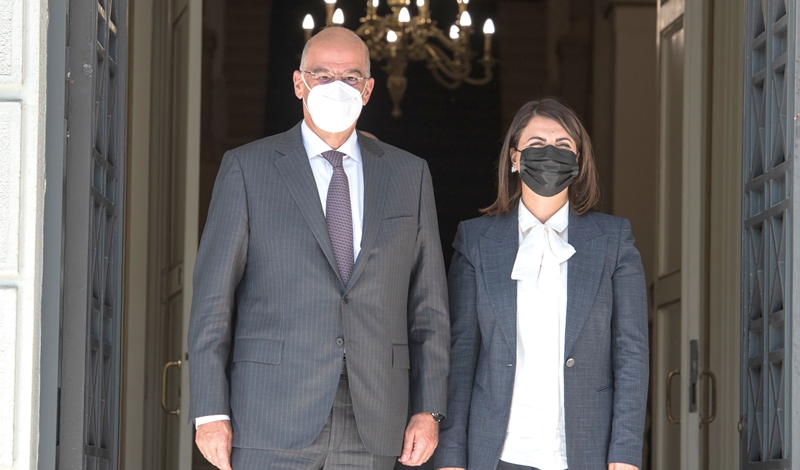 Urging a more decisive stance from Brussels on the issue of Libya, the Greek Foreign Minister stressed during the meeting with his Libyan counterpart that “instability on the southern shores of the Mediterranean affects every country in the wider vicinity.”

Minister Dendias added that he plans to recommend that Minister Mangoush is invited to address an upcoming luncheon of European Union Foreign Ministers and said that he will bring up the subject with EU Foreign Policy Chief Josep Borrell.

Minister Dendias also noted that Greece was one of the first countries to re-open its Embassy in Tripoli and that it was also the first country to inaugurate a Consulate General in Benghazi. “To be precise, we re-opened it, because we had to close it in 1998. We try to assist in any way we can. We have already donated 200.000 vaccines to address the corona virus pandemic and if you need extra help with it, we are entirely at your disposal. We wish to assist the Libyan people in their daily lives.”

Referring to the upcoming elections in her country, Minister Al-Mangoush called on Greece to help see these succeed, “because security and stability in Libya mean security and stability for Greece and the EU.” She also called on the EU to help Libya by providing the necessary tools for security there. Minister Mangoush also said that Libya is prepared to work with Brussels on the issue of migration from Africa to Europe.

After describing the recent visit of Greek Prime Minister Kyriakos Mitsotakis to Libya as a sign of “great support for Libya’s National Unity Government,” she invited Minister Dendias to visit the country at his earliest convenience.