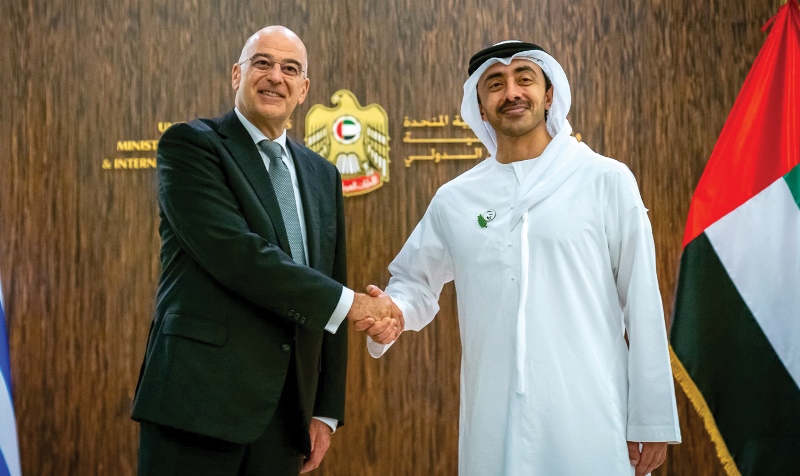 “Strategic, long-term relationship of major significance to both countries”

H.H. Sheikh Abdullah bin Zayed Al Nahyan, Minister of Foreign Affairs and International Cooperation of the United Arab Emirates, received Minister of Foreign Affairs of Greece Nikos Dendias on June 8th-9th. During their meeting, held at the Ministry’s headquarters in Abu Dhabi, both sides discussed the strategic relations between the UAE and Greece, as well as the importance of advancing their overall cooperation to achieve the interests of their peoples.

They also reviewed issues of mutual interest, including developments in the Eastern Mediterranean and the importance of maintaining security and stability in the Middle East.

On his two-day Official Visit to the UAE, his fourth in his tenure as Foreign Minister, Minister Dendias said he and his UAE counterpart “reaffirmed our common vision for peace and stability in the region. We had a timely discussion on bilateral strategic cooperation following the agreement signed between Greece and the United Arab Emirates on foreign policy and defence cooperation last November, developments in the Eastern Mediterranean in the light of the Turkish Foreign Minister’s recent visit to Athens and broader developments in the Middle East and the Gulf.”

“First of all, we had the opportunity to discuss the relations between Greece and the United Arab Emirates in all sectors – defence, energy, economy, tourism, but also to make a thorough review of the issues concerning the wider region – Turkey, Libya, the Middle East. Furthermore, I took the opportunity to brief him on the upcoming visit of the Minister of Foreign Affairs of India to Athens, which is of particular importance to both us and the United Arab Emirates,” he noted.

“I would like to reiterate that our relationship with the United Arab Emirates is a strategic, long-term relationship, of major significance to both countries,” the Head of Greek Diplomacy emphasised.

Sheikh Abdullah welcomed the visit of Minister Dendias stressing the distinguished relations between the UAE and Greece and their fruitful cooperation in various domains.

The meeting also touched on the on-going cooperation between the two countries to fight the Covid-19 pandemic and to mitigate its fallouts. The two sides stressed the importance of stepping up global efforts to ensure delivery of vaccines to all countries of the world.

They praised the recent announcement on the establishment of a safe travel corridor between the UAE and Greece for fully vaccinated individuals, in addition to mutual recognition of vaccination certificates issued by health authorities in the two countries. 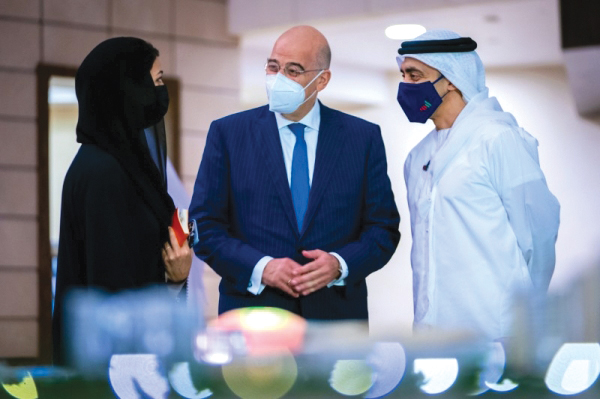 Sheikh Abdullah hosted a dinner banquet in honour of the Minister of Foreign Affairs of Greece and his accompanying delegation. Reem bint Ibrahim Al Hashemy, Minister of State for International Cooperation, attended the meeting.

During his stay in Abu Dhabi, the Minister of Foreign Affairs visited the new premises of the Greek Embassy and the Artificial Intelligence University Mohamed bin Zayed, where he was briefed on the important scientific work of the university.