“Russia is an inalienable part of the safety architecture of Europe”

Minister of Foreign Affairs, Nikos Dendias, recently visited Sochi, Russia where he met with his Russian counterpart Sergey Lavrov. Talks focused on issues of bilateral significance and on regional developments. Whilst in Russia, Minister Dendias travelled to the coastal cities of Anapa and Gelendzhik on the Black Sea where he met with businessmen and representatives of the large Greek diaspora that is making a tangible contribution to the promotion of ties between Russia and Greece.

The Greek Foreign Minister expressed the hope that it will be possible to schedule the visit of Prime Minister Kyriakos Mitsotakis to Russia within 2021 to promote bilateral relations during a joint press conference with his Russian counterpart Sergey Lavrov.

“Russia has repeatedly supported the unalienable right to expand our territorial waters and the fact that all differences must be resolved on the basis of the International Law of the Sea, something that the Minister reiterated during our talks today,” the Greek Foreign Minister said. He also expressed his appreciation for “the Russian commitment to the Resolutions of the UN Security Council concerning the Cyprus issue.”

Minister Dendias also expressed his concern that “Turkey is promoting itself as the heir of the Ottoman heritage and as the leader of Muslims globally, a practice that destabilises the wider region.” In this regard, “Russia’s contribution to promoting stability, especially as a permanent Member of the UN Security Council and the Quartet, is of massive significance,” he added.

Minister Dendias also said that he had a “sincere and open” discussion on the difficult relationship of the European Union and Russia and that he remembers the partnership agreement signed between them 27 years ago on Corfu, his place of origin, long before he was involved in politics. “It is the Greek Government’s wish that the relationship between the EU and Russia returns to the level it was, not get worse,” he said, as “Russia is an inalienable part of the safety architecture of Europe and plays a significant role in dealing with regional and international challenges.” Greece is an EU Member State and committed to its European obligations, but continues to stress the need for dialogue and mutual respect, a message that the Premier of Greece conveys to his EU counterparts, he added.

On his part, the Russian Foreign Minister said this was the fourth meeting between the two, adding that regular contacts helped guarantee and confirm the friendly relations between the two countries.

“Greece is one of the most significant partners of the Russian Federation in Europe,” he said, noting Greece’s 200th Anniversary this year of its Declaration of Independence as “our joint celebration”. Russia contributed in key ways to Greece’s independence from the Ottomans and to its formation as a State, he added. Despite the difficulties arising from the coronavirus pandemic, Greek-Russian collaboration keeps developing steadily with constructive dialogue at high and the highest levels.

“Today we reviewed progress in the implementation of agreements signed by Russian Federation President Vladimir Putin and Greek Prime Minister Kyriakos Mitsotakis, as well as the decisions discussed during the meeting of Prime Minister Mikhail Mishustin with Premier Mitsotakis on March 24th and their follow-up phone conversation on May 5th,” Minister Lavrov said, referring to the Russian Premier’s visit to Greece for the celebrations of Greek Independence.

“We have agreed to work to overcome the negative impact of the Covid-19 pandemic in order to maintain practical cooperation between our countries; confirmed mutual interest in expanding ties, implementing joint projects in trade, investment, research and energy and restoring tourist flows. We supported the convention of the working groups of the Joint Russian-Greek Commission for Economic, Industrial, Scientific and Technical Cooperation and its plenary session as soon as possible this year.”

“We assessed our treaty and legal framework. We are working on about 20 draft agreements. We agreed to expedite their drafting with a view to signing them during future contacts” he added.

Minister Lavrov reiterated Russia’s position on the Cyprus issues, of seeking a solution on the basis of UN Security Council Resolutions for a bicommunal and bizonal federation and that of transferring the issues of security guarantees to the jurisdiction of the Council’s five permanent Members. He also conveyed Russia’s willingness to serve as mediators on the issue. 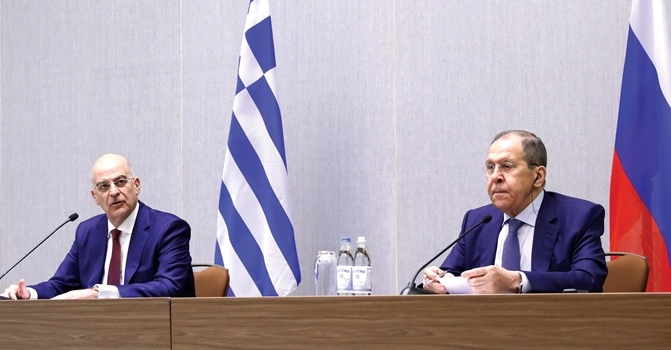 Russian-EU relations are “not going through the best of times,” the Russian Minister acknowledged, underlining that it was not Russia’s initiative to start the cycle of sanctions imposed by Brussels. “We confirmed our readiness for constructive dialogue with the EU, but based exclusively on the principles of equality, mutual respect and evaluation of each other’s interest, not based on unilateral illegal demands,” he clarified, adding that clashes and tension in the Balkans, the Middle East, East Mediterranean, Libya, Syria and Transcaucasia “can be resolved solely by political and diplomatic means on the principles of International Law, without allowing confrontation.”

Minister Lavrov also mentioned among others the cultural and humanitarian exchanges developing positively. “Our cultural and educational exchanges are making steady headway. We share the opinion that the joint Year of History in 2021 will give a fresh impetus to people-to-people contacts. It is being conducted under the patronage of President of the Russian Federation Vladimir Putin and Prime Minister of the Hellenic Republic Kyriakos Mitsotakis and includes over 120 events in our countries. This major undertaking will promote confidence, understanding and friendship between our nations,” he noted.

Both sides analysed in depth international and regional issues and agreed to continue close cooperation at multilateral venues, primarily, the United Nations, the OSCE, the Council of Europe and the Organisation of the Black Sea Economic Cooperation (BSEC).

“We are very happy with the results of the talks and the fact that our Greek partners are willing to further promote bilateral collaboration in several sectors,” the Russian Minister concluded.

Pictured above: Minister of Foreign Affairs, Nikos Dendias, receives a warm welcome to Sochi from his Russian counterpart, Sergey Lavrov; the two delegations in conference headed by the Ministers of Foreign Affairs; giving joint statements to the press.