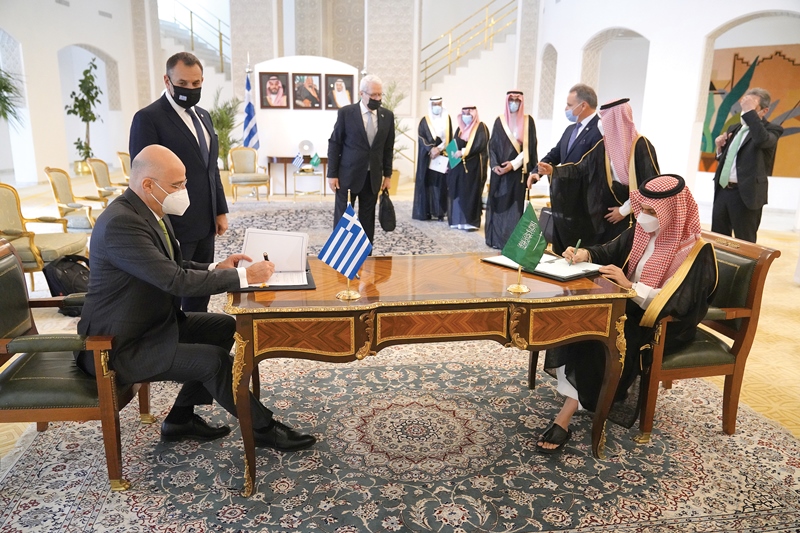 Foreign Minister Nikos Dendias and National Defence Minister Nikolaos Panagiotopoulos have visited Saudi Arabia in order to hold a series of meetings with senior Government officials within the context of promoting and consolidating diplomatic diplomacy between the two countries.

During their visit the Ministers signed two agreements. “Greece and Saudi Arabia are upgrading their diplomatic and defence cooperation, aiming for regional stability,” Minister Dendias said after wrapping up contacts with the Saudi Crown Prince and Ministers, including Faisal bin Farhan Al Saud, Foreign Minister of the Kingdom of Saudi Arabia.

In statements after the conclusion of his meetings, Minister Dendias spoke of his meeting with Minister of Defence, Crown Prince and Deputy Premier Mohammed bin Salman bin Abdulaziz and of the agreements signed. “First of all, we signed an agreement with the Gulf Cooperation Council (GCC), something that both sides had sought for a long time. We also signed an agreement for the transfer of one battery of Patriot missiles to Saudi Arabia. For Greece, this comprises great progress in our collaboration with countries of the Gulf and our contribution to the wider security of the West’s energy sources. Greek foreign policy, whose main aim is to pre-link the country with the Gulf countries, took another step forward.” 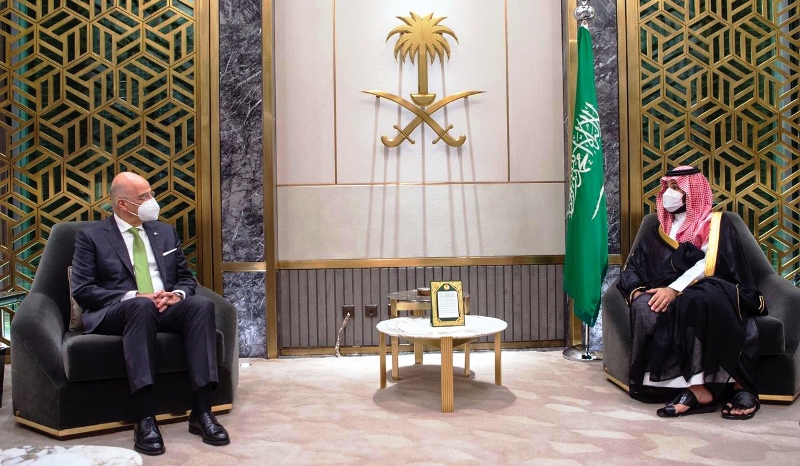 Earlier, Minister Dendias met with Saudi Minister of State for Foreign Affairs Adel bin Ahmed al-Jubeir. “We discussed the excellent Greek-Saudi relations and the continually strengthening collaboration ties, as well as recent regional developments,” he said. Asked to comment on Saudi Arabia’s and the UAE’s participation in the international Armed Forces exercise ‘Iniochos 2021’ as two traditional Gulf forces and how important that is to the region’s balance of powers, Minister Dendias said: “We do not see it as an issue of balance of powers. We see it as creating a front of understanding on the firm foundation of International Law.” He also noted that all the countries in the greater region, without exception, that adhere to International Law as a way of understanding and behaving, are welcome in this greater understanding.

The two Greek Ministers began their visit to Riyadh with a meeting with GCC Secretary General Nayef bin Falah Mubarak al-Hajraf. They discussed the two countries’ strong ties and Greece’s increasing cooperation with Gulf countries, as well as regional developments, a tweet of the Greek Ministry said. Minister Dendias and the Secretary General then signed a Memorandum of Understanding to establish political consultations on issues of mutual interest.

Commenting on the visit, Defence Minister Panagiotopoulos referred to his meetings with Saudi Arabia’s Deputy Defence Minister Prince Khalid bin Salman and with Saudi Foreign Minister, Prince Faisal bin Farhan and stressed the importance of collaboration in view of security threats in the region. He added that “a battery of the Patriot missile system of the Greek Air Force will be deployed shortly and operate from Saudi Arabian territory as part of the Multinational Plan of Activated Air Defence for the protection of critical energy infrastructure against terrorist threats.” 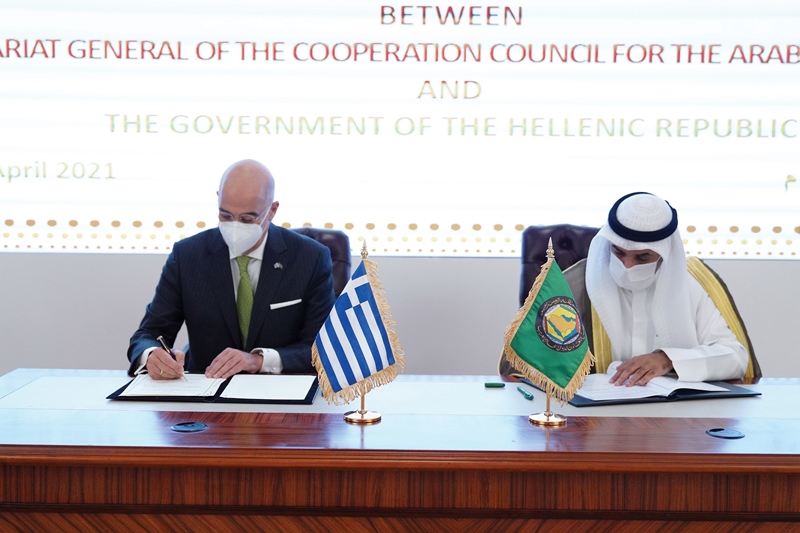 (Photographs by H.Akriviadis/Office to the Minister of Foreign Affairs)