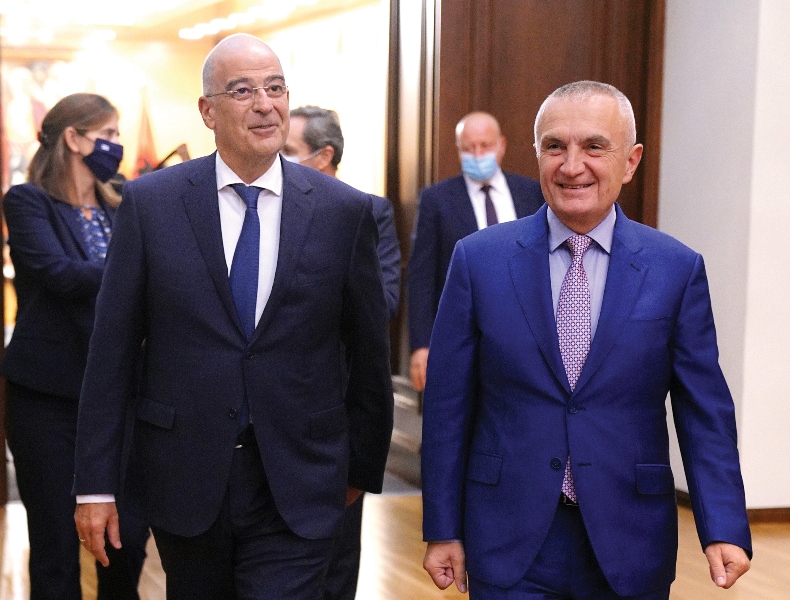 Strengthening cooperation in the interest of both peoples

Greece and Albania recently decided to refer their maritime zones issue to the International Court at The Hague, during a meeting between and Albanian Prime Minister Edi Rama and visiting Greek Foreign Minister Nikos Dendias.

“Having examined the issue thoroughly, we agreed that Greece and Albania would jointly take recourse to international justice, the International Court at The Hague, on the issue,” Minister Dendias said following a meeting with Premier Rama. “This agreement is based on the consistent adherence by both countries to international legality and the principle of resolving differences peacefully,” he added. The Greek Foreign Minister noted that the two countries “also referred to the Greece-Albania agreement of 1996 and we agreed that this treaty requires deepening and strengthening. We decided to proceed jointly to a new strategic collaboration agreement between the two countries and to set up a G2G meeting and mechanism between the two friendly countries.”

The two officials also discussed the issue of an outstanding state of war, on paper, which Minister Dendias called “an anachronism” and said would be resolved. They also discussed the issue of minorities and the spirit that should underpin good neighbourhood relations. The accession of Albania to the European Union is a joint goal of both countries he underlined, noting Greece’s consistent support of accession for West Balkan countries.

Turkey, on the other hand, Minister Dendias said “is moving in the opposite direction… continuing to violate fundamental EU accession criteria – both political and economic – on a daily basis.”

Minister Dendias was in Tirana for a series of meetings with Albania’s State and political authorities. Following his meeting with Premier Rama, he also met separately with acting Foreign and European Affairs Minister Gent Cakaj, President of Albania Ilir Meta, the Presidents of the Democratic Party and the Unity for Human Rights Party, Lulzim Basha and Vangjel Dule, respectively, with Greek entrepreneurs who are active in Albania, as well as with His Beatitude Archbishop Anastasios.

“Albanian-Greek relations are among the main priorities of our foreign policy and these relations must continue to develop in the spirit of good neighbourliness, linked to strategic interests, close cooperation in NATO, a common European perspective and the two countries’ economic interests,” Albanian President Ilir Meta stated during his reception of the visiting Greek Foreign Minister.

The President expressed his gratitude for the continued support of Greece in the European perspective of Albania, as a national and strategic goal. In addition, he assessed that the Greek minority in Albania represents a strong bridge for the two States’ long-term friendship and, together with the Albanians living in Greece, constitute the foundations of healthy and long-term relations between them. President Meta also voiced his gratitude for the solidarity and support Greece exhibited in the aftermath of the November 2019 earthquake, as well as for cooperation with regard to the Covid-19 pandemic.

Regarding the issue of the demarcation of the maritime space between the two countries, the President of the Republic stressed that he has and will continue to encourage the resolution of the issue through honest dialogue and mutual respect, aiming at a permanent and lasting solution.

In summary, this successful visit of the Head of the Greek Diplomacy and consequently the  EEZ agreement, enables Greece again to show itself as a country that is capable of settling outstanding disputes with its neighbours on the basis of International Law. Furthermore, the approach on such a crucial issue could and should “unlock” Greek-Albanian relations, creating a favourable climate for Tirana and Athens to press the restart button in the interest of both peoples.

Previous 5th EU Arab World Summit: a Strategic Partnership between the Arab World & the EU
Next Official Visit of the Minister of Foreign Affairs of the Russian Federation to Greece