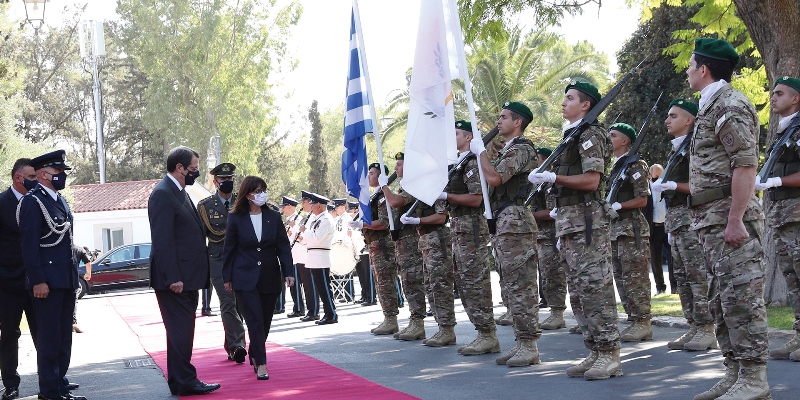 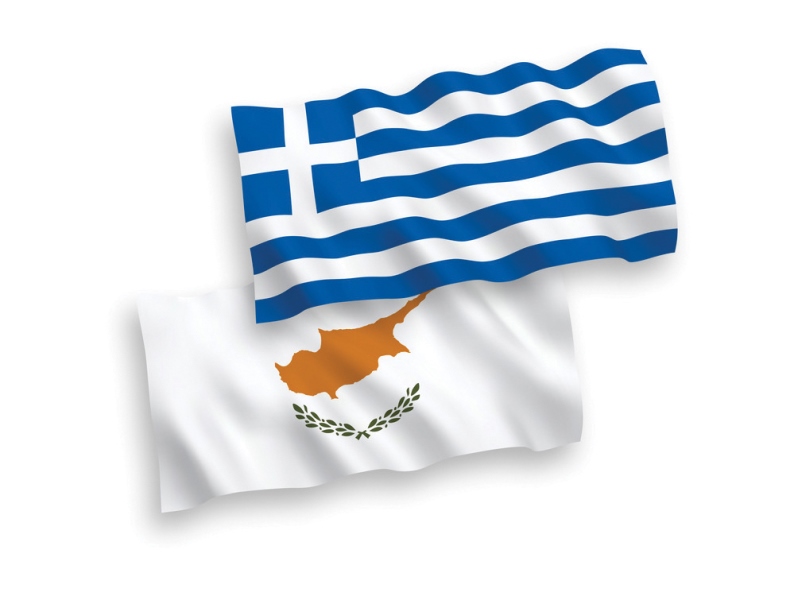 President Sakellaropoulou was in Cyprus for a two-day Official Visit, her first State Visit abroad after assuming her duties. The two Presidents held a tête-à-tête meeting followed by consultations with the participation of delegations from both countries. They then made joint statements to the press. 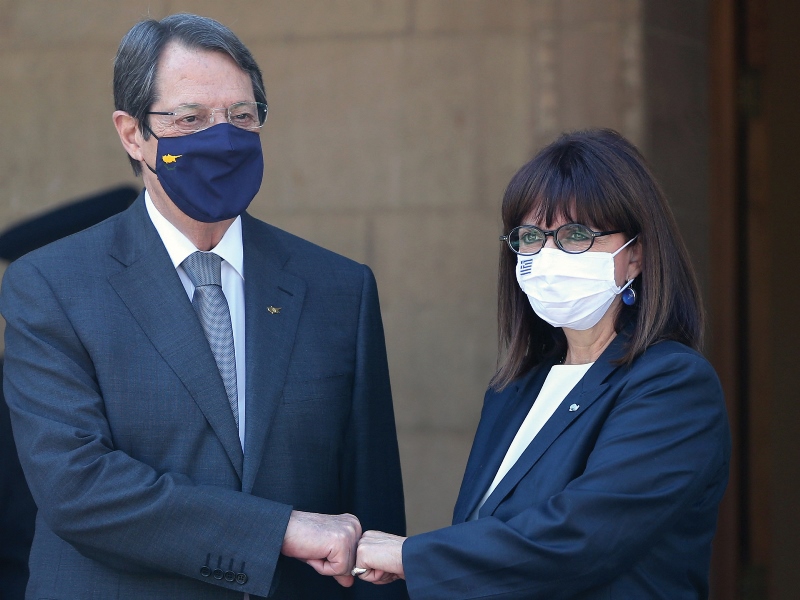 President Anastasiades stated that he had had the opportunity to reiterate to the President of Greece his will and determination to continue working tirelessly in order to reach a solution that will lead to the reunification of Cyprus. He stressed that “Turkey’s intentions to derail from the agreed basis for resolving the Cyprus issue are not only a cause for concern, but also require a more active involvement of both the United Nations and the EU.”

He said that during the meeting, they had discussed the current situation in the Aegean and the wider Eastern Mediterranean following Turkey’s provocations and illegal actions in the region. He added that they also noted the need for International Law to prevail under the Articles of the UN Charter and the Convention on the Law of the Sea, through legal proceedings that include dialogue in good faith or recourse to the International Court of Justice in The Hague.

President Anastasiades said that they agreed that the violations of International Law and the disturbance of stability and peace in the region is not only a problem of Greece and Cyprus, but also a European one, noting that the borders of the two countries are also the external borders of Europe. Moreover, he said that they had evaluated the positive role played by Cyprus and Greece through the tripartite, multilateral cooperation with neighbouring countries, except, as he said, unfortunately Turkey, something that is not due to Greece or Cyprus. 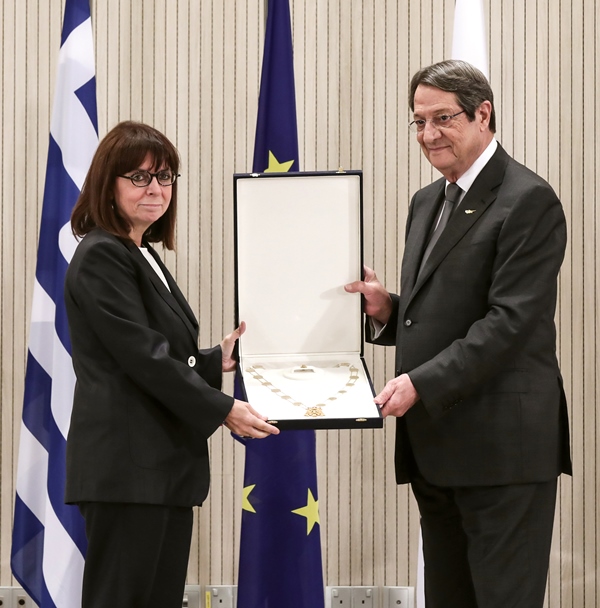 President Anastasiades noted that the initiatives that the two countries undertake demonstrate that respect for International Law is a key factor in the stability and peaceful coexistence of the peoples of the region. In addition, they discussed the Cyprus issue and the continuous occupation of part of the territory of Cyprus, an EU Member State, by Turkey. Among other things, he said, they discussed the Turkish threats  for the settlement of the fenced off area of Varosha in the Turkish occupied town of Famagusta, as well as the lack of progress as regards the humanitarian issue of the missing persons, Greek Cypriots and Greeks after the Turkish invasion against Cyprus in the summer of 1974.

“It is our common belief that the unacceptable situation must end on the basis of UN Resolutions, Security Council decisions and EU principles and values. Within this context, we welcomed the recently expressed will of the UN Secretary-General for a new initiative on the basis of what has been agreed at the November 25th meeting in Berlin,” he stressed. Finally, the President noted that they expressed concern about the increasing migration flows, which are being systematically channelled from Turkey.

Regarding Cyprus, he pointed out the deliberate attempts by Turkey to alter the island’s demographic character either by the influx of settlers into the occupied territories or by the promotion of asylum seekers in the government-controlled areas. He stressed that the percentage of the asylum applicants in Cyprus reaches 3.8% of the population living in the government controlled areas.

President Anastasiades expressed the gratitude of Cyprus towards Greece for its long-lasting support as regards the Cyprus issue and said that he expressed to the Greek President his willingness and determination to continue tirelessly his efforts  for a Cyprus solution that would lead to the reunification of the island, based on the  UN Resolutions, the EU principles and a solution that would create a truly independent State, without the presence of  the Turkish army or the anachronistic guarantee system.

Furthermore, he said that they agreed that in this difficult time, Cyprus and Greece are defending their sovereignty and national dignity and continue their efforts with determination and with the sole aim of ending any illegal action wherever this may be coming from.

In her statements, the Greek Head of State said that her visit is indicative of the fact that the Cyprus issue constitutes a high priority of the Greek policy, adding that her visit takes place at an extremely crucial juncture amid Turkish illegal actions in the region. The Greek President emphasised that Greece and Cyprus will work together to end Turkey’s occupation of the northern portion of the island and to reunify the country. “Let us fight with unshakable faith and perseverance to end the Turkish occupation and to reunify Cyprus,” she said.

President Sakellaropoulou noted that they discussed the latest developments and in particular the consequences on the EU of Turkey’s illegal behaviour. In addition, she said they discussed the most appropriate ways of reaction on behalf of the EU in order to put an end to the Turkish actions, which continue violating the sovereign rights of the Republic of Cyprus. Their meeting, she said, took place shortly before the important European Council.

Referring to Turkish research vessel Oruc Reis’ withdrawal from the Eastern Mediterranean and its return back to Turkey, she said that it constitutes a positive step towards de-escalation, but added that it remains to be proven whether this was a tactical move or a choice which will have a continuity.

Moreover, she said that they had discussed prospects for a Cyprus solution and the readiness of Greece to assist, if the appropriate conditions are created, for the resumption of the process from the point where talks were left in Crans Montana in July 2017.

As regards the immigration issue, she stressed the need for the new Immigration Pact to refer to a practical demonstration of European solidarity and European principles and values and to provide for a proportionate participation and burden sharing on the part of the EU Member States.

She too stressed that Greece and Cyprus are called upon to bear a very large burden on immigration, much greater than their share, and that this must be taken into account.

The Greek Head of State said that during the meeting they also addressed a number of important and international regional issues, which are of particular interest for Greece and Cyprus. She pointed out that the initiatives, with tripartite and multilateral cooperation, are based on International Law and their goal is peace, stability and development in the region.

Concluding, she thanked the President of Cyprus for Cyprus’ solidarity and humanitarian aid after the fire at the Moria refugee camp in the Greek island of Lesvos.

Earlier on, during a ceremony, the Cypriot President decorated his Greek counterpart, President Sakellaropoulou, with the Grand Collar of the Order of Makarios III, the highest order of merit awarded by Cyprus, expressing the deep gratitude of Cyprus for the long-standing support of Greece in the struggle to find a just and viable solution to the Cyprus problem.

The Greek President thanked President Anastasiades noting that through this highest order Cyprus is honouring Greece and the fraternal relations that connect the two countries. Greece, she said, will always support Cyprus and the efforts to reach a just and sustainable solution to the Cyprus problem for the benefit of all Cypriots. 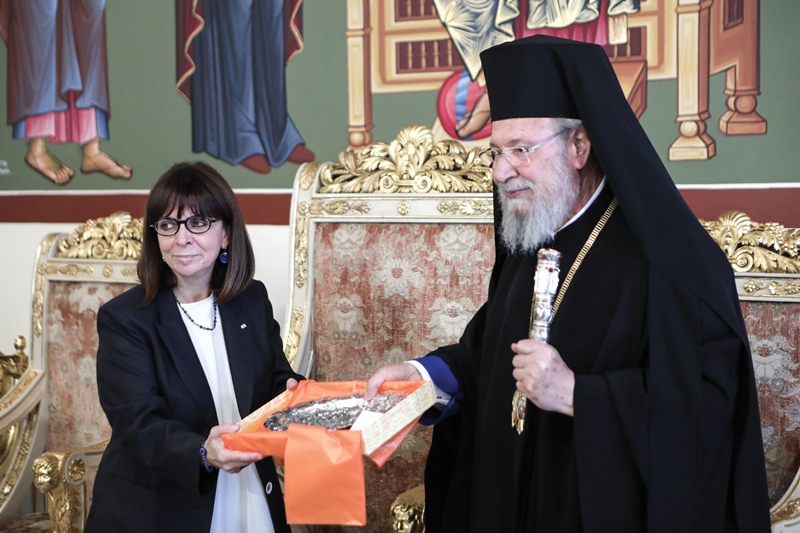 Whilst in Nicosia, President Sakellaropoulou met with Archbishop Chrysostomos, held a meeting with the Parliament President, Demetris Syllouris, and with the leaders of political parties. She also addressed a special plenary of the House.

During the second day of her State Visit, President Sakellaropoulou visited two cemeteries, the Imprisoned Memorial Graves and the Tomb of Makedonitissa. Upon her arrival at the Imprisoned Memorial, she was welcomed by the Minister of Justice and Public Order of Cyprus, Emili Yioliti. This was followed by the laying of wreaths and a guided tour of the area. “With profound emotion today I honoured the Greeks and Cypriots who fell for the freedom of Cyprus at the Tomb of Makedonitissa,” she said on Twitter, adding that “with perseverance and faith” we must work towards “the end of Turkish occupation” that began after their illegal invasion of the island in 1974. This touching visit was preceded by a visit to Ledra Street checkpoint and the ceasefire line, while a visit to Malounda followed. 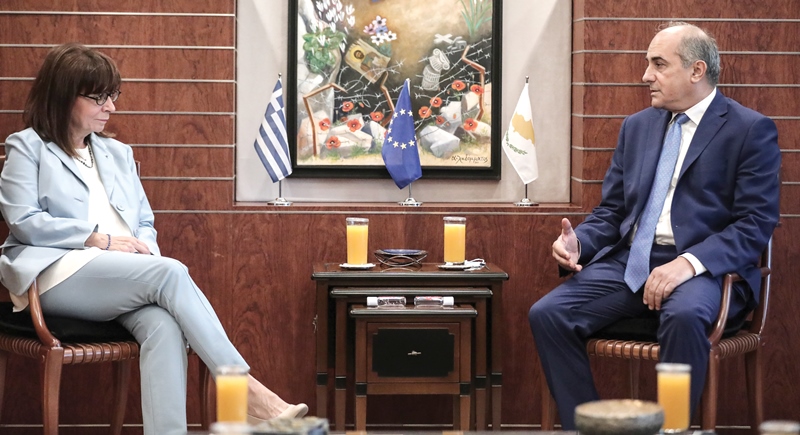 Cyprus has been divided since 1974, when Turkish troops invaded and occupied its northern third. Turkey has ignored numerous UN Resolutions calling for the withdrawal of the Turkish troops and respect of the integrity and sovereignty of the Republic of Cyprus.

“Let us fight with unshakable faith & perseverance to end the Turkish occupation and to reunify Cyprus,” 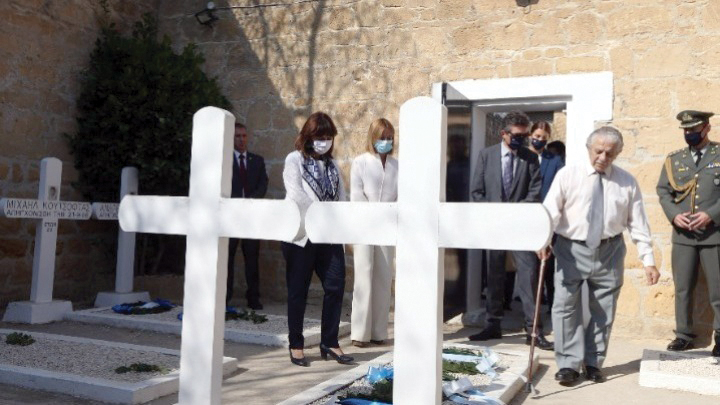 (Photos: Th.Manopoulos/Office to the President.)

Previous Foreign Minister of the UAE in Athens for talks with Greek leadership
Next Visit of the US Secretary of State; deepening strategic partnership