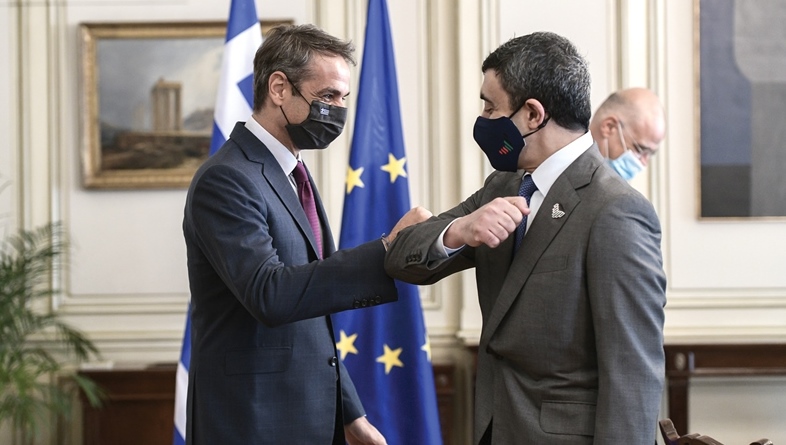 Establishing a robust strategic partnership across all fields

The relationship between Greece and the United Arab Emirates has taken on a strategic nature, improving the multi-level bilateral ties between the two countries, Foreign Minister Nikos Dendias said after a meeting with his UAE counterpart, Foreign Minister Sheikh Abdullah bin Zayed Al Nahyan, at the end of last month in Athens.

The two Ministers exchanged views on the situation in the Eastern Mediterranean and Turkey’s recent actions and expressed the hope that Turkey will adopt this approach consistently and with duration, stopping illegal actions and provocations and placing priority on dialogue. Minister Dendias noted that respect for International Law and the UN Law of the Sea, as well as good neighbourly relations, was an obligation and not a choice, as this was the only way to establish peace and stability in the region.

Minister Dendias highlighted the very good level of Greece’s bilateral relations with the UAE and said that both countries wanted to develop a strong framework of cooperation for their mutual benefit. He pointed to the steps taken in bilateral economic cooperation and in adopting renewable energy sources, while noting that recent cooperation in defence will add new depth to bilateral ties.

“Greek-UAE relations have become strategic in nature, upgrading the multi-level ties between us. In the economic sector, there is already a strong institutional foundation that we hope will lead to a new era. The Memoranda of Understanding and Joint Action Programme we concluded within the context of the two Strategic Fora we held this year will act as multipliers. We are capitalising upon the opportunities for cooperation that exist in the sectors of investments, trade, tourism and culture, health, digital services and agriculture,” he added.

Concerning their meeting, the two Ministers said that they had covered relations between the UAE and the EU, as well as the situation in the Middle East, Libya, the Gulf Region. Minister Dendias also highlighted the UAE’s important role as a country striving for stability and security in region, expressing Athens’ support for the historic agreements for normalising relations between the UAE, Bahrain and Israel. The Greek Minister was additionally briefed on the UAE’s efforts to promote inter-faith dialogue.

Sheikh Abdullah bin Zayed Al Nahyan, on his part, said that peace and security in the region were a shared goal for Greece and the UAE, while he condemned “the actions of other countries, including neighbouring countries that want to expand and constitute a source of danger and destabilisation in the region.” He called for closer cooperation between the two countries, noting that their ambitions were based on a common foundation of mutual respect and a desire to further deepen cooperation with Greece in the economy, trade, health, technology, infrastructure and tourism, including a doubling of bilateral trade.

During his meeting with Premier Mitsotakis were discussed ways of accelerating cooperation in areas of science and technology, food and water security, renewable energy and oil, with the two sides reiterating their countries’ determination to establish a robust strategic partnership across all fields.